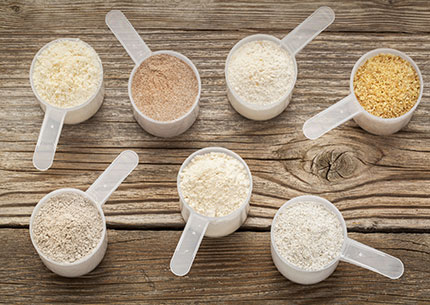 The new quinoa: waking up to the benefits of teff

In its native Ethiopia it is estimated that teff is grown by 6.3 million farmers but the health benefits is only just beginning to be felt in western countries. The grain itself is a good source of iron, calcium, protein, fibre and B vitamins. It can come in white, brown or read and is also gluten free so suitable for coeliacs.

Sophie Sirak Kebede is the co-founder of UK-based importers Tobia Teff, who also make teff based products, and says that the growing health market is waking up to the benefits of teff: "It is gluten and sugar free by its very nature and apart from this what is makes it stand out from other gluten and sugar free products is its nutrients, because it is so small its nutrients are still intact."

In parts of the UK the National Health Service (NHS) prescribes teff because of the health benefits that are associated to it and in some circles teff has even been dubbed the ‘new quinoa’.

Tobia Teff has been importing a variety of teff products into the UK for the last seven years and may soon be gracing some big name shops in London, the country’s capital. The company, which is run by Kebede and her husband, sell teff based cereals, home-baked bread, and more.

"We import the flower, the breakfast cereals as well as the teff milk to the UK," says Kebede. "We make the bread; we sell the flour as it is. We bake the bread and we sell the bread.

"The most successful one is the flour because it is on prescription with the NHS as well as private healthcare prescription. So that goes well and people obviously want to try their own bread.

"But we are recently hoping that we’re going to start baking the organic teff bread for planet organic for their six branches in London to supply them two or three times a week."

The health-foods shop already stocks packets of the flour and also the breakfast cereal. A sure sign that teff is growing in popularity among those in the UK is the increase in sales and interest that the company has had and Sophie says that it is definitely on the radar of more people now.

"It is certainly growing. When we started about seven years ago if you said about teff to anyone they wouldn’t know if it was a Christmas pudding or a banana split," exclaims Kebede.

"But I am very happy to say we can move away from that and now even though it is not a household name at least people who are very health conscious people start knowing about it.

"It’s getting there, for the last two and a half years, business has been picking up obviously and every single day we do get a request asking what is Teff. People are very inquisitive as well, we’re getting there. It is much better than before."

Some of the massive growth of teff over the last few years is also thanks to celebrities such as Victoria Beckham and Gwyneth Paltrow.

Sophie puts some of it down to an increased media awareness of the product but also because there is no comparison to its nutritional value – which makes it stand out from other health products on the market.

She said: "Yes it is gluten and sugar free but that is just a small factor for teff, what really makes it stand out is the nutritional value and some parents are starting to give their children teff right from the beginning.

"I hope it won’t take another five years but we are hoping to make it a household name."

The health benefits, along with the high-level celebrity endorsements, can only continue to increase the notoriety of the grain which is set to have a bright future.