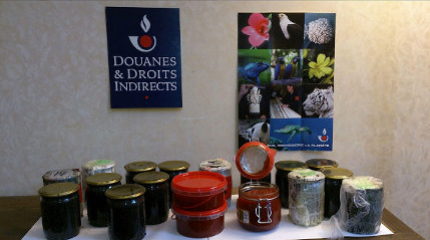 Interpol-Europol operation leads to seizure of 2,500t of fake food and drink

A joint operation between Interpol and Europol saw the agencies seize thousands of tonnes of fake and sub-standard food and drink in 47 countries worldwide.

Operation Opson IV was conducted during December 2014 and January 2015 and saw seizure of more than 2,500t of fake and illicit food, including mozzarella, strawberries, eggs, cooking oil and dried fruit.

Checks at shops, markets, airports, seaports and industrial estates carried out by police and customs with the help of national food regulatory bodies and partners from the private sector led to the exposure of the food racket.

Nestle promises to remove artificial flavours from candy products by 2015

Nestle USA announced that it will take steps to remove artificial flavours and FDA-certified colours from all of its chocolate candy products by the end of 2015.

The company stated that all artificial flavours and colours, including Red 40 and Yellow 5, will be removed from more than 250 products, as well as ten of its brands, including Nestle Butterfinger, Crunch and Baby Ruth.

The new products will be made available in the markets by mid-2015, and will be identified by a ‘no artificial flavours or colours’ claim featured on every pack.

These apples are said to retain their fresh appearance and colour without turning brown after being sliced or bruised.

The development is expected to increase the sale of apples.

The European Parliament backed a resolution that mandates the labelling of meat used as an ingredient in processed foods by country of origin, in a similar manner to bovine fresh meat.

Members of European Parliament (MEP) voted in favour of the plan, and called upon the European Commission to come up with legislative proposals to rebuild consumer confidence following the horsemeat scandal, as well as other food fraud cases.

The European Commission (EC) had published a report on the issue in late 2013.

Perth Food and Drink Park, a project to boost industry growth in Scotland, is ready for start-ups and established businesses to move in their operations.

With a £5m investment by Perth and Kinross Council, Perth Food and Drink Park is a 16-acre easily accessible facility of premium land to the north of the city at North Muirton, offering up to 11 serviced development plots in the range of one to three acres.

The United Nations has launched a newly developed fish drying technology in West Africa that is helping the region improve food quality and boost food safety.

Smoked fish forms a substantial part of the West African diet. The FTT is being launched in the Ivory Coast, where approximately 20%-30% of local marine and freshwater fish is consumed in the smoked form.

The company has produced these references in response to the horse meat scandal, and other subsequent reports of substitutions of cheaper meat in the food chain.

These meat mixtures will help food testing laboratories to assess the quality of their measurements, and also ensure that substitutions in meat products at specified low levels are detected.

This acquisition of Big Heart, which owns popular Meow Mix and Milk-Bone brands, is expected to provide Smucker with an immediate and significant presence in the $21bn pet food and snacks category.

It is also in line with the company’s strategy of owning leading food brands in centre-of-the-store categories, with a focus on North America.