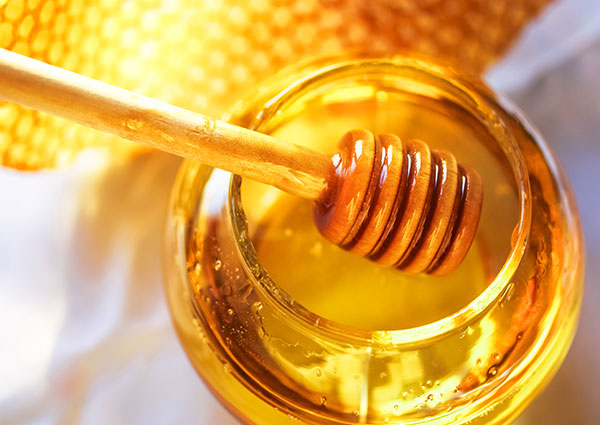 It was a tour with the armed forces that introduced Shamus Ogilvy, founder of Ogilvy’s Honey to a passion for the sweet stuff. "I was serving a term in Kosovo at the time and while I was there, I saw honey producers at work – the Albanians are very into their honey."

Once his term was over, Shamus returned home, but it wasn’t long before he was back in the Balkans for a tour of the peninsula’s aperies. As Ogilvy soon found out, sourcing fine honeys is a job that requires a degree of temerity.

"One of the first places I went to was in Bosnia. I went just as the war started, and we had to trek through a minefield to get to the apery, which was quite daunting."

Travelling to rare destinations to source the honeys that make up his collection involves some risk, butimporting the honeys can be equally challenging. It took five years of wrangling to import Ogilvy’s Balkan Acacia from south east Serbia, because the region wasn’t on the EU map.

"I went back to Serbia and I had an army friend of mine who spoke Serbian put me in touch with the Serbian equivalent of the UK Trade and Industry department, and it went from there."

The regulations governing the exporting of honey are strict, and understandably so: last year, there were reports that the UK Food Standards Agency has placed a blanket ban on all Chinese honey, ordering it off the shelves after 10 out of 16 samples were found to containchloramphenicol, a strong antibiotic used by Chinese beekeepers to treat diseases in the bee colonies.

A global search: sourcing the honey

Ogilvy’s operates out of Northamptonshire, but Shamusis an intrepid globetrotter, and has a number of ways of sourcing his honeys. He credits the internet as a great source for honey hunting tips, and makes a point of attending international apery trade shows.

"There was one in Argentina about 3 years ago, and another in Kiev in 2013." To make the Ogilvy’s grade, Shamus runs a series of tests on his prospective honeys. "I test the honeys in the country [of origin] before I export them, then I test them again. I test for water and sugar-fructose levels: the higher the glucose level, the quicker the honey will crystalize; the higher the fructose levels the slower it will crystalize. Those are critical factors."

Crystalizing is a naturalprocess, explains Shamus, but some honeys crystalize faster than others. "Heather honey will crystalize within two to three weeks. English blossom honey will start out runny, but end up cloudy. Our New Zealand Rainforest honey, for example, crystalizes very quickly, so we churn it to break down the crystals and make them smooth. They won’t crystalize again after that. Other honeys, like my Balkan Linden and Balkan Acacia, will take up to two years [to crystalize]."

Introducing the UK market to rare and exquisite honeys is Ogilvy’s mission, one that runs alongside Shamus’ belief that honey can and should be enjoyed for its refined qualities,much like chocolate, coffee and wine. But what makes a honey fine?

"Honey is all about what plants and flowers the bees pollinate on," explains Shamus. "I do detailed research on the plants". Ogilvy’s collection contains both polyfloral honeys – honey produced by bees who have pollinated on a number of plants – and monofloral honeys, "where the bee has pollinated on a single flower, much like a single malt whisky".

Texture, taste and smell are key criteria when testing honeys, says Shamus, along with providence. Unbeknownst to most consumers, the majority of honey products sold on the high street are not pure, single-source honeys, but blends. "What the big boys do is take lots of honeys from different countries and blend them. This means you never know where the honey comes from. I name the country and where the apery is, giving providence.

That’s my key USP." One of the disadvantages of blending, explains Shamus, is that the process requires heat treating the honey, something Ogilvy’s avoid. "I like to keep them as natural as possible."

A variety of uses: new inspirations and food knowledge

Before his stint in the armed forces, Shamus trained at the prestigious Leiths Cooking School and worked as a chef, running his own catering company for 15 years. He uses his chef’s palette when selecting Ogilvy’s honeys, and is a fount of foodie knowledge when it comes to incorporating Ogilvy honey into everyday dishes.

"Our Himalayan Highlands honey works well in yoghurt, due to its rich, warm aroma and I use our Zambezi honey in ice-cream; it’s a rich, tropical honey with lots of bioflavonoids, and a distinctive red current flavor. I like to have the Balkan Acacia with coffee because it has no odour, is very sweet and works as a sugar supplement. The New Zealand Rainforest has a nice gentle flavor, and I tend to put it on toast or crumpets. Our organic Brazilian Plateau is one I found about two years ago. It’s very shiny and naturally rich in minerals and enzymes. Our Linden honey has a delicate woody scent and works well in Lapsang tea."

Honey has long been valued for its medical uses, Manuka honey in particular, and the Linden is reputed to have sedative, antiseptic qualities, along with helping to alleviate anxiety and bronchitis. Ogilvy’s New Zealand Rewarwa honey, produced by bees feeding exclusively on the bright red flowers of the Rewarewa tree, is often mistaken for Manuka. "I use it for basting," says Shamus. "It works very well with chicken and fish."

While Ogilvy’s has its gaze firmly set on exotic foreign honeys, Shamus is cognizant of the issues in the United Kingdom. The decline of bee populations here in the UK has become a pressing concern in recent years, with pressure groups pressing the government to banindustrial pesticides. He’s also aware of the growing issue of GM pollen in honey.

"I was going to by some organic honey from Argentina, but they went into heavily into GMO crops just as the EU banned them." In September 2011 the European Court of Justice ruled that pollen is an ingredient of honey and that honey containing GM pollen must follow GM regulations.

In 2012, the Commission proposed to amend the Honey Directive,asking thatpollen be reclassified as a constituent of honeyrather than an ingredient – a change thatwouldhave a considerable impact on labeling. European beekeepers and farming groups have demanded the ECJ ruling be implemented in full, claiming the move to reclassify pollen is an attempt to circumvent the ECJ ruling andhide the presence of GM pollen from consumers.

"I don’t know enough about GM crops to comment on the situation," says Shamus. "But I do know that if people want honey produced by bees whohaven’t pollinated on GM crops, it’ll mean more rigorous testing, and that’ll push up the price for traders such as myself."

For now, Shamus is busy hunting for "the next Manuka". He has his eyes set on a number of potential new honeys for the Ogilvy collection, but he’s not giving anything away just yet.