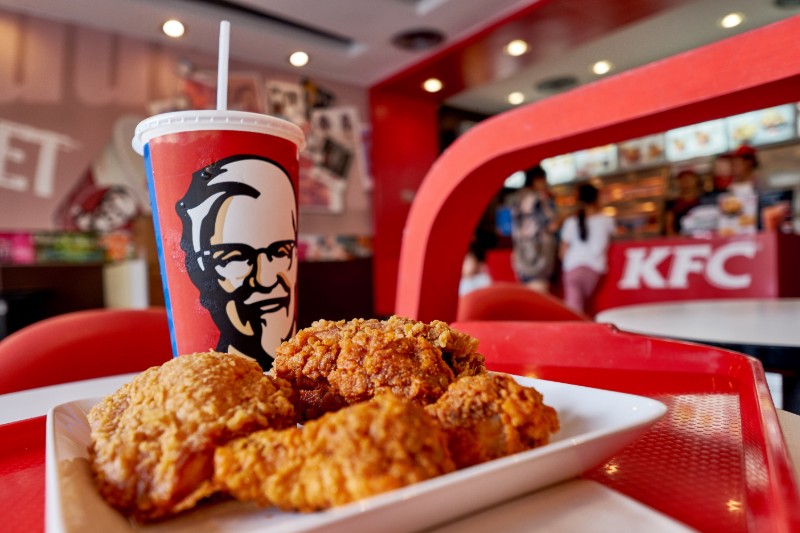 Why is Kentucky Fried Chicken (KFC), a famously chicken-specific foodservice brand, embracing alternative protein, and will it work? With the interest in and uptake of plant-based meats only on the rise globally, and continuing to be highlighted despite the pandemic, it is something for competitors to consider carefully.

Plant-based KFC Popcorn will also be available in the country for a limited time.

KFC announced on Weibo that it was partnering with Cargill and Beyond Meat to trial plant-based fried chicken products in Shanghai, Guangzhou and Shenzhen between 28–30 April. Each serving was sold for ¥1.99 (US$0.28).

KFC partnered with Green Monday to the New Era Nugget and New Era Burger in Hong Kong in June, at a similar price to the chicken-based equivalents. The nuggets are made from Alpha Foods’ soy and wheat protein and the burgers are made from Gardein’s soybean, wheat protein, pea protein, grain and vegetables product.

Recently, KFC entered into an agreement with 3D Bioprinting Solutions to cultivate meat for nuggets in the lab. The new nuggets will be designed to emulate the taste and appearance of meat nuggets while being more environmentally friendly and ethical to produce than ordinary chicken meat.

KFC and 3D Bioprinting Solutions use chicken cells and plant-based material to cultivate chicken nuggets in the lab using 3D printing. The printing process should reproduce something close to the taste and texture of chicken while almost removing animals from the process. The breading and spices will remain true to KFC’s established recipe, and the new printed meat will have the same microelements as real chicken. Taste-test examples for investors should be ready by the end of the year.

In July, Beyond Fried Chicken announced that it had partnered with KFC to trial Beyond Meat’s chicken nuggets in over 50 locations in Southern California. Beyond claimed that their fried chicken alternative sold out in five hours in August 2019 in Atlanta.

KFC is an established global chicken-focused restaurant brand, so why are they getting so involved with plant-based alternatives?

According to GlobalData’s most recent consumer survey*, how ethical, socially responsible or environmentally friendly a product is always influences 19% of global consumers’ product choices, and often influences 24% of global consumers’ choices. These numbers are significant and prop up the prodigious growth seen in vegetarian, vegan and alternative cuisine in recent years.

The ethical claim for the meat is straightforward; growing chicken cells without the need for a full-grown animal to grow, suffer and die for the food item can be clearly determined to be more palatable, ethically, and plant-based alternative meats are also typically better for the environment, requiring less land, energy and water to produce than their meat equivalent.

The target audience for these products need not be die-hard vegans and vegetarians, either. In the fast few years, the dining world has been affected by flexitarianism, a ‘casual vegetarian’ diet that concedes several vegetarian/vegan arguments around ethics, health and the environment, and thereby advocates a reduction in the consumption of animal products while not committing to replacing meat entirely. Plant-based meat alternatives, however, make it easier for this consumer group to substitute meat for alternatives in iconic fast-food settings like KFC.

If the new nuggets and burgers attend to KFC’s standards of taste at a price that offers value for money, it will be an obvious choice for substitution for the large number of consumers who would prefer a more ethical and environmentally friendly alternative. It may also attract people who previously swore-off KFC out of concern for animal welfare or the environment. Other brands should take note – tying up with plant-based alternatives appeals to a wide group of consumers, across class lines.