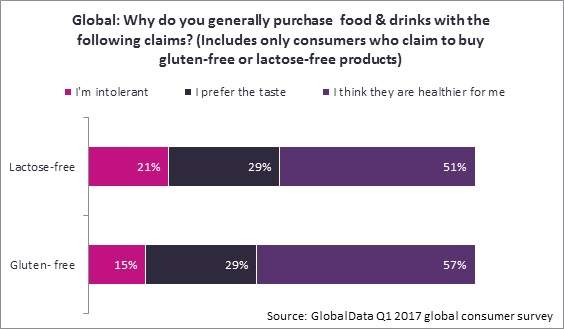 Consumers are cutting out one, or even several, ingredients such as gluten or dairy, in the belief that it will be healthier for them or help them lose weight.

However, with demand also growing for natural and ‘clean label’ products, how well do free-from formulations really stack up against consumer’s healthy perceptions?

According to GlobalData’s Q1 2017 consumer survey, 49 percent of consumers globally purchase products with gluten-free claims to some extent. A similar proportion (50 percent) does the same for lactose-free products. While a small percentage of these consumers need to buy such products for genuine allergy or intolerance reasons, the majority are doing so voluntarily because they believe them to be healthier.

In a world where gluten free pizza and almond milk cappuccinos have never been more easily accessible, are such products actually as healthy as consumers think?

As manufacturers attempt to recreate the same tastes and textures as regular products, they inevitably end up adding other ingredients to replace what’s being taken away. Almond milk for example, can include numerous stabilisers, emulsifiers and contender to regular cow’s milk.

Given the growing ambivalence towards processed foods, and general shift in demand towards natural and ‘clean’ labels, there is a risk that the Free From wave will soon be over as consumers come to realise product formulations do not live up to their healthful expectations.