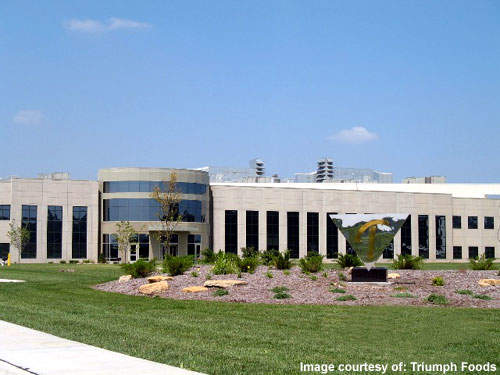 The administrative buildings of the 620,000ft&sup2; pork processing plant and corporate headquarters. 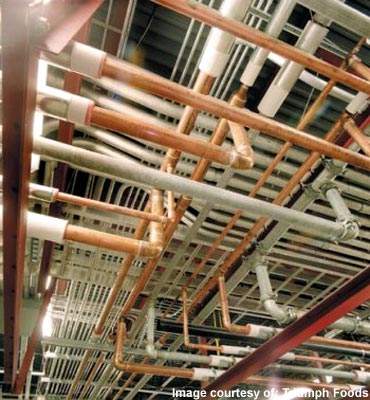 The general contractor for the construction of the new facility, Foley Company, was also responsible for the subcontracting of the process piping and plumbing. 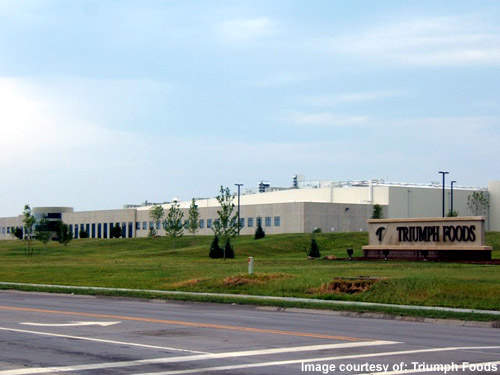 The new plant is able to process and pack over 1,100 pigs per hour when in full production. 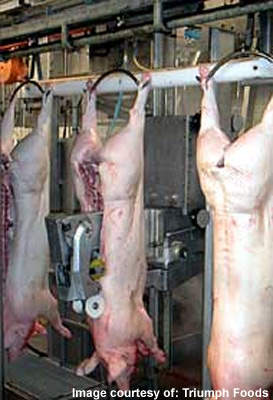 Pigs being eviscerated by F-line robots. 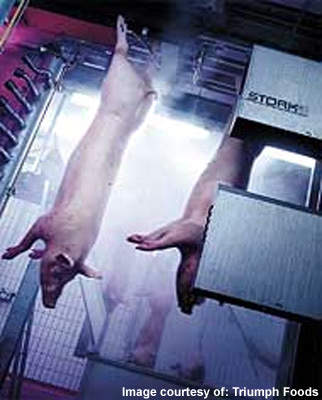 The dehairing on the line is carried out by a high throughput TARZAN machine.

Triumph Foods (formerly known as Premium Pork) is a pork processing business on the east coast of the US. The company is owned by a shareholding cooperative of hog producers, who are able to supply over 330,000 pigs per year for processing into pork, ham and bacon products.

Owners include: Christensen Farms (second largest pork producer in the US), The Hanor Company, TriOak Foods, New Fashion Pork, and Eichelberger Farms (a family-owned Iowa farm with 19,000 sows). Another shareholder is Allied Producers Co-operative, made up of more than 30 producers.

Triumph Foods started the construction of a new 620,000ft² pork processing plant and corporate headquarters on a 65-acre brown field site in St Joseph, Missouri in mid-2004 that was due to come on-stream in late 2005.

The plant opening was delayed in October 2005 by an explosion on the site; the damage was limited to the administration and cafeteria blocks although a construction worker was killed. The new plant was repaired and operations were able to start in January 2006.

The plant is able to process and pack over 1,000 pigs per hour. All of the chilled meat products produced at the plant are marketed by Seaboard Farms under an agreement between the two companies announced in February 2004.

The investment for the new facility was estimated at $140m. The facility initially employed about 300 workers but this later increased to 1,000 workers. The facility injects about $21m per year into the St Joseph economy.

School administrators in the area gave an extra 15 teachers training in English for speakers of other languages to deal with an expected influx of immigrants from Mexico and Central America who want to work at the new plant.

Sygen International signed one of the largest pig genetics contracts (pig insemination contract (PIC)) in North America to support 550,000 sows for Triumph Foods. Under the terms Triumph Foods provided its cooperative shareholders with premium genetics to rear high-quality pigs for slaughter and processing at the facility.

The wastewater treatment facilities at the plant were partially funded by a Missouri Development Board grant of $10.42m arranged by St Joseph city council.

Construction of the pork processing facility

Triumph Foods received a Certificate of Completion for the clean up of 65 acres of abandoned and underused property located on Packers Avenue in St Joseph, Missouri in mid 2004. A brown field site – the area was once a busy meat-packing district.

Despite the property’s many owners and uses, assessments found little actual contamination on the site. Clean up consisted of removing petroleum-contaminated soil from several surface spill areas.

The general contractor for the construction of the facility was Foley Company, who was also responsible for the subcontracting of the process piping and plumbing, HVAC, water, waste water, vacuum and sanitary systems to local St Joseph contractors. Grinnell and KC Windustrial supplied components and equipment for the vacuum and water service installations.

The contract for the design, supply of equipment, outfitting, commissioning and start-up of the plant, including mustering areas, kill floor, and automated evisceration equipment including robotic technology was awarded to Stork-MPS.

The state-of-the-art facility includes horizontal bleeding, pull-through scalding, a set of in-line dehairers, an automatic polishing line with a double set of dry-singe-polish, and the ergonomic evisceration systems for hygienic and cross-contamination free removal of the offals. All conveyor systems were provided with the low-maintenance type of chains and sprockets with removable self-adjusting teeth. Space was also reserved for F-Line robots for cutting of the pelvic bone, opening of the belly and centre line cutting of the breast bone.

Slaughter line at the Missouri plant

The F-line is the new generation of modular pig slaughter robots and is an example of the latest technology in meat slaughter and processing. The Stork MPS F-line automates pre-cutting, belly opening, rectum drilling, neck cutting leaflard removal, splitting and marking. The robots take over the hard laborious tasks on the evisceration line.

The system is fully expandable and can be easily adapted to a wide range of carcass weights and processing cycle times.

The facility also incorporates a condensation pull-through scalding system which has the advantage of using 90% less water than other systems and is much more hygienic.

The dehairing on the line is carried out by a high throughput TARZAN machine, which is a heavy duty continuous U-bar double scraper roller dehairing machine that can process 240–1,400 pigs per hour.

Triumph Foods decided to build a new refrigerating unit at the St Joseph facility in October 2012. The construction of the 30,000ft² new freezer space will enable the company to increase its pork exports in line with the growing demand in overseas markets.

The expansion will create 30 additional jobs at the plant. The $9.5m expansion was started in November 2012 and is expected to be complete by the end of 2013.

In 2005, Triumph Foods announced plans to build a second plant at East Moline, Illinois, at a cost of $136-$160m. The new plant was expected to process 1,000 hogs per hour. Local incentives of $20m were already in place after the announcement. Construction of the plant was originally scheduled to start in January 2009. However, due to insufficient funds, construction of the new plant has not yet progressed.

As of January 2010, Triumph Foods was carrying out discussions with several government officials to secure funds for the new plant under the USDA loan guarantee programme. Triumph Foods has put the Illinois plant construction plans on hold with the ongoing expansion of the Missouri plant.