Up to 90 cows an hour
Expand

Depending on the number of robots installed, a commercial DeLaval AMR can milk up to 90 cows each hour. Image courtesy of Björn Qvarfordt – DeLaval International AB.

The robot in the system attaches milking cups on the nipples via a magnetic gripper. Image courtesy of Björn Qvarfordt – DeLaval International AB.

The robot has a laser guided camera to detect the exact location of the nipple. Image courtesy of Björn Qvarfordt – DeLaval International AB.

The cows are secured one at a time on the circular platform through a double saloon gate. Image courtesy of Björn Qvarfordt – DeLaval International AB. 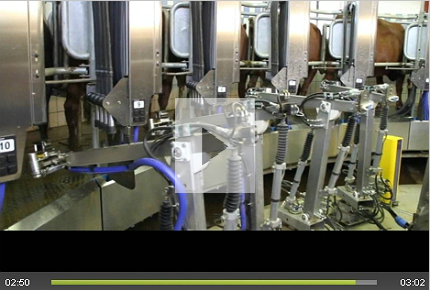 The robotic milking machinery was developed by DeLaval, a Swedish company which produces dairy and farming machinery.

The Dornauf family, which owns and operates the Gala farm, had ordered for the machine in July 2011 and installed it at the farm in early 2012. The family plans to introduce 300 to 350 more cows to the farm by 2015.

The second commercial installation was at the Laproma farm located in Schlossvippach, Germany. Laproma will set up a new site to facilitate installation of the DeLaval AMR.

Construction will be undertaken in two phases, in order to accommodate 800 more cows by 2013. First robotic milking is anticipated in September 2012.

DeLaval collaborated with the FutureDairy project in Australia for the development of AMR technology.

FutureDairy is a national programme promoted by DeLaval, Dairy Australia, the University of Sydney and the New South Wales Department of Primary Industries (DPI). It was instituted to improve productivity of Australian dairy farms.

Automatic milking systems have been in commercial operation outside Australia for many years, but they are suitable for small, indoor herds as found in traditional European market.

FutureDairy partners were of the view that the Australian dairy industry requires a low-cost, automatic milking system capable of extracting milk at dairy farms which have more than 300 cows.

In order to meet those needs, DeLaval engineers built up the robotic rotary design in consultation with researchers at FutureDairy. Development on the initial concept commenced in 2005 and the first prototype of the machine was ready by 2008.

In order to test the robotic rotary for Australian conditions, the prototype was installed at the Elizabeth Macarthur Agricultural Institute in Camden in 2009. Performance of the installation was closely monitored to build the commercial robotic milking rotary.

Components of the commercial AMR

"The robotic milking machinery was developed by DeLaval, a Swedish company which produces dairy and farming machinery."

The AMR features an internal, herringbone rotary platform, with robots put up in the centre and cows facing outwards.

The commercial installation has 24 milking points with robots ranging from two to five in number. The tasks performed by the machine include nipple washing and drying, attaching the milking cups, cup removal, nipple disinfection and cup flushing. The system also monitors milk output and quality.

In the two-robot system, the first robot performs the task of nipple washing and drying, while the second robot applies the milking cups.

The five-robot installation has two robots dedicated for nipple cleaning, two for applying cups and the fifth for nipple disinfection.

Details of how the automatic milking rotary functions

Cows are secured one at a time on the circular platform through a double saloon gate. After final positioning of the cow, the platform moves to the next stop for nipple preparation. The next cow behind her can now get into the system.

"DeLaval collaborated with the FutureDairy project in Australia for the development of AMR technology. FutureDairy is a national programme."

The robot engaged for nipple preparation uses a laser guided camera to detect the exact location of the nipple. The nipples are then washed individually with a special nipple cup containing water and are also dried.

An optic milk meter in the magazine monitors the milk flow, output, blood and conductivity. The magazine also has sensors. It is used to monitor the cup’s vacuum levels. Cups are individually pulled back into the magazine once the milk flow ends.

The last move of the platform will take the cow to a dedicated nipple spray robot for disinfection. The cows get out of the platform through an exit lane. Once the individual cow is done with milking, the cup is rinsed on both sides with water.