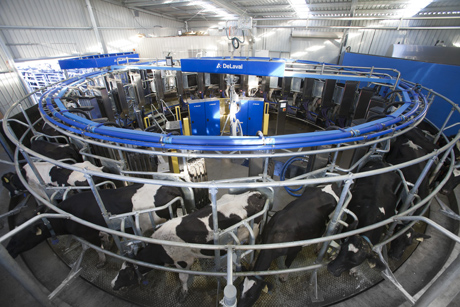 DeLaval manufactured the robotic rotary dairy, called the Automatic Milking Rotary (AMR), and has installed the system at the farm, owned and operated by the Dornauf family.

The technology has been developed by the FutureDairy project in Australia, a collaboration between DeLaval, Dairy Australia, NSW Department of Primary Industries and the University of Sydney.

Featuring five robots, the rotary has a capacity to milk up to 90 cows per hour, and is based on 24-unit internal, herringbone rotary that enables the robots to reach the cow from the side.

With the use of laser technology, the robots focus red light to determine the location of the cow’s teats, clean them and attach the cups.

The first two robots clean and prepare the teats for milking, the second two attach the cups to the teats, and the last robot sprays the teats to disinfect them before the cows leave the platform.

Design of the dairy yard plays an important role in the AMR’s operation – the yards have a series of smaller yards, divided by automatic gates known as smart selection gates (SSGs), which can guide cows in two or three different paths after the milking.

The cows wear automatic identification collars or transponders, and when the cows approach the SSG, the system reads the transponder and guides the cow in the direction set in the DELPRO herd management software.

The AMR’s integration with the DELPRO software enables users to manage the cows individually and record the milk production data.