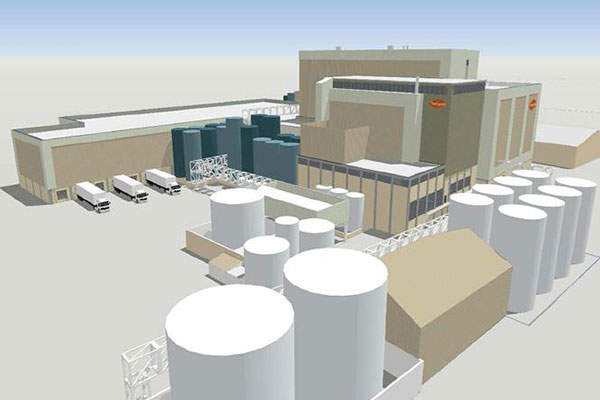 The proposed landscape to the northern entrance of the site. Image: courtesy of Dairygold Co-operative Society Ltd. 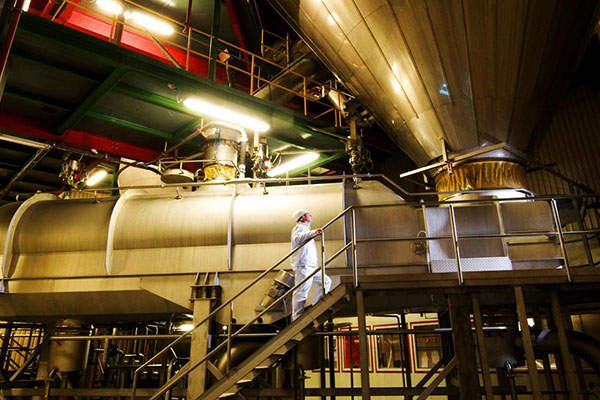 The project aimed to deliver a world-class dairy processing facility as part of the society’s post-quota plan designed to accommodate the predicted increase in milk flow resulting from the abolition of EU milk quota restrictions in April 2015.

The expansion created a much larger, cleaner, quieter and efficient facility, which produces a range of dairy ingredient milk powders that meet infant formula standards.

The redevelopment was commissioned in mid-2016 and milk processing at the site was temporarily halted between July 2014 and April 2015 to carry out the expansion.

In 1984, the EU Common Agricultural policy set a limit on the amount of milk that Ireland could produce annually in order to overcome a surplus production problem.

The restrictions were lifted in April 2015 due to a growing demand for milk, allowing farmers to enter the free market.

Lifting the quotas provided a unique opportunity for Dairygold and the Irish dairy industry to establish itself as a world leader in supplying quality dairy products.

To facilitate the anticipated growth, the company also initiated a planned investment programme at its production facilities.

Details of the Mallow site redevelopment

The expansion project includes alterations to the existing north entrance/exit, south entrance/exit and north boundary fence adjacent to Lower Beecher Street, as well as the demolition of certain existing structures and associated services.

The new structures include a single-storey, part-open-sided, roofed, milk intake unit, a pasteurisation and separation building, a six-storey spray dryer unit building with two dryers, an evaporator unit building and a single-storey building for storing milk powder.
The existing 5t/h dryer facility on the site was incorporated into the new raw milk delivery building.

A packing and palletising zone, weighbridges and buildings for administration, security and weighbridge control, a chemical intake bay and parking facilities were also built.

Existing milk processing facilities were decommissioned by July 2014. Redevelopment works were carried out within the existing site boundary, while certain improvements were also planned for road and junction layouts.

Pedestrian facilities on the public roads adjacent to the site were also enhanced.

Production at the Mallow site

Milk powders produced at the site include whole milk and fat-filled powder, as well as an infant milk formula base. A new 7.5t/h capacity milk dryer was installed by March 2016, followed by a second one by 2019.

The Mallow site manufactures more than 450t of milk powders a day in different specifications meeting infant milk formula standards when both dryers are in operation.

Benefits of the redevelopment

The redevelopment delivers a significant economic boost to Mallow town and its surrounding areas. Agriculture and farming incomes in the region will significantly increase while benefitting the broader communities directly and indirectly in a number of ways.

It is expected to create 100 new construction jobs, while up to 300 people are expected to be employed during peak construction. It also provides long-term sustainable employment in farming and processing related activities.

The project substantially increases rural economic activity in the Mallow hinterland and also attracts new businesses to the town.

KMPC Consulting was the planning advisor and Malachy Walsh and Partners provided engineering and consulting services for the project.

The construction contract was won by MMD Construction. GEA Process Technologies Ireland was responsible for the process design, while RKD Architects was appointed to carry out architectural design and finishes.

Infrastructure at the existing dairy processing facility in Mallow

Dairygold’s existing dairy processing site is located in the heartland of Munster and operates on a seasonal basis. It features all the necessary infrastructure and regulatory licensing to facilitate expansion.