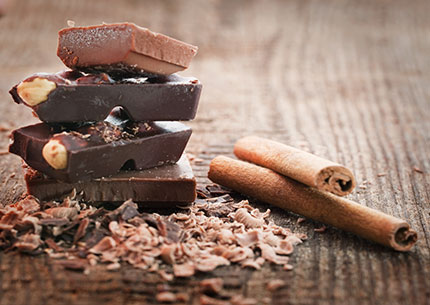 Ross Davies: How did you arrive at establishing IQ Chocolate?

Jane Shandley: To cut a long story short, my business partner Kate [Hamilton] and I, while in our previous jobs at a London university, were doing a lot of commuting. We found ourselves one afternoon sitting in the airport, yet again, waiting for a delayed flight back to Edinburgh, musing over what our next adventure might be.

Kate’s a real foodie, and I’m interested in looking after myself and have a fairly healthy diet. But I am one of these people that will not eat something just because it’s healthy – it actually has to taste good, too.

So we had a bit of a lightbulb moment and decided on making a new type of chocolate that was both delicious and healthy. As well as taking inspiration from artisan chocolate makers springing up in the US, we also began investigating some trends. I discovered that dark chocolate shares were increasing year by year.

Looking at the health market,as well, we could see that this whole idea of super foods was a mega deal, not just here in the UK, but globally.

RD: Your research also led you to work alongside academic institutes, right?

JS: Yes. Early on, I think we knew that we had a very high quality of chocolate and we were also fairly sure that it was a healthy chocolate. But with the new European legislation coming in, we knew we couldn’t just say, ‘this is a healthy chocolate’. It needed to be validated.

So we invested in partnering with academic institutes – initially at the Rowlett Institute of Nutrition and Health [part of the University of Aberdeen], and then Robert Gordon University[also in Aberdeen]. We also took advice from an expert involved with the new European legislation.

RS: How did you become the first UK chocolate to have your health claims validated by independent researchers?

JS: The first step was to have the bars analysed, and then, as I said, we retained an expert, in line with the new European food and health legislation. She scrutinised everything, and I have to say, it was pretty frustrating, because it was very much a case of, ‘no, you can’t do this; you can’t do that’. But, in the end, we added it up, and there were something like 21 validated health claims, which we now have individually for everything from the effect our chocolate has on the bones, skin and hair to how it can improve strength, energy and mood.

RS: Has it been challenging overturning the preconception that chocolate cannot be healthy?

JS: That is definitely our biggest challenge because I think chocolate is typically perceived as either a candy bar – and of course we can never compete in price because of the quality of our ingredients – or it is seen as a luxury treat. So, perhaps in terms of the business concept, we don’t fit into either of those categories. We really are trying to build something where we are positioning our chocolate very clearly as a natural food.

But, you are absolutely right – we’ve been to several conferences and events, and whenever I say ‘healthy chocolate’, people immediately assume that it has been artificially engineered to be diet chocolate or something like that. It’s just getting the message across that chocolate in its natural form is genuinely one of the healthiest things that you can possibly eat.

That’s why we have continued to invest in academic research, which gives us credibility. This is so important.

RD: What else goes into the chocolate that makes it so different?

JS: Well, this is one of the things that we like to keep fairly close to our chests, because it’s pretty much our USP. But let’s just say that we scoured the globe to obtain the best ingredients that we could possibly find.

Then there is our work with the Rowlett Institute, which looks at the way in which we actually make the chocolate, ensuring that we are retaining maximum nutritional value all the way from the bean right through to the bar.

It’s also a very pure food with no additives or anything like that.

RD: What’s next for IQ Chocolate?

JS: I would like to think that we have successfully repositioned chocolate, neither as a candy bar – which is something you might want, but you shouldn’t have – or a luxury treat, but, instead, as something that is seen as an important element in a regular, healthy diet.

Virtually all our target customers are in places like Whole Foods and Harvey Nichols, not to mention all the Planet Organic stores.

The next stage will be about digging a little deeper into our research. In January, we will be starting work with a Scottish rugby team, working alongside their nutritionist and dietician – it will alsobe done in tandem with Queen Margaret University in Edinburgh – and measuring the impact of our chocolate beans on their diet, as well as other indicators such as recovery levels and endurance.

And then there is the whole health and beauty aspect as well. We are keen to develop something with a beauty bar and will be looking into the impact of our products on the health of the skin and hair.