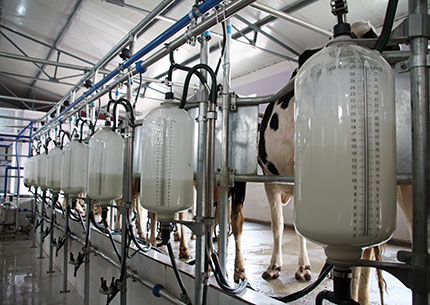 Farming can be back breaking work planting crops, lifting machinery and getting up far too early in the morning. Surely it would be easier to get a machine to do all the dirty work? Well thanks to new developments in robotic technology that dream is a reality.

Ok, so robots will not leave farm workers with no work at all (someone has to monitor them, collect field results and make sure they don’t try and install new world order when your back is turned) but they can become a vital part of farm life.

Recently the UK government set out a new agri-tech strategy with an investment of £160m in public funding. Out of this funding, around £60m will go to supporting the development of solutions to agri-tech challenges, including robots, and £90m will be spent on setting up centres of agricultural innovation.

At the Oxford Farming Conference in January 2014, secretary of state for the environment, food and rural affairs, Owen Paterson, announced the new strategy stating: "I want our farmers and food producers to have access to the widest possible range of technologies, from new applications of robotics and sensor technology to new LED lighting in greenhouses and cancer-fighting broccoli."

New technology: why do we need robots?

The idea of robot workers sounds practically thrilling but one has to ask, why would we need to use robots? Robotic technology is currently in use and being developed to tackle monotonous, repetitive tasks that humans find tedious or do not want to do.

Unlike humans, robots do not get tired or complacent so will be able to complete a better quality job, handle material more consistently and with less damage. Examples of the robotic takeover include the Wall-Ye wine robot that prunes overgrown branches and the Orange Harvester, which utilises 3D technology to pick fruit straight from the trees.

Professor Simon Blackmore, head of engineering at Harper Adams University, is currently developing robotic technology and states that the future will see smaller, lighter and more efficient robots: "You’re very aware we’ve got a lot of wet weather at the moment and the soil is very soft if you take a tractor out into a field today it would just sink to its axles. At the moment the farmers blame the weather but I realised it’s not the wrong sort of weather it’s the wrong sort of tractor."

As well as taking on manual labour jobs robotic technology can be used to monitor animal health and soil condition. David O’Hare, CEO of Fullwood Limited, manufacturers of a robotic milking machine, explains how the technology does more than just milk cows.

"We’re looking at the cow and her environment in very minuscule detail," says O’Hare. "We’re monitoring the health and fertility condition of the cows, her nutritional intake, her output, milk quality and so on."

Chief executive of the Royal Agricultural Society of England, David Gardner, says that the motivations for farmers to buy the technology are largely a lifestyle choice for many family farms, allowing them to break the early morning milking cycle.

Already in use: the robotic milking system

Although robotic milking technology sounds ground breaking, it has actually been around since 1996. The robotic milking system works on a basis of voluntary milking. Using feed as the primary motivator, the cows visit the milking system when they want throughout the day. The system also monitors animal health, milk yield and quality. Generally robotic dairy farming can result in a 10-12% increase in milk yield as the cows visit the milking system two or three times a day to be milked.

The bulky device may not look like the robot of your dreams or nightmares but nevertheless sales have seen a significant increase recently. This type of robot is the most common in the UK and the market is constantly growing.

O’Hare says: "If I was to put the market into context in the UK probably 20-25% of all new milking systems that are being sold today are robotic milking systems. In some markets, such as the Netherlands, that number is as high as 50%."

If the concept of robots in our fields and farms is too much to handle then the image of machines hovering over our heads may send you into a tailspin but stay with me.

Unmanned air vehicles, or drones, are usually associated with the military but scientists have been looking at ways in which drones can be used to watch over herds and monitor farms.

"We are developing different types of UAVs here," says Blackmore. "We’re actually developing some micro copters at the moment which will fit in the palm of your hand and they’ve got cameras on them and can send the picture back in real time for analysis."

The team are currently using panchromatic and infrared cameras to measure the nutrient status of the leaves and to indentify and count livestock. Experts are unsure about the future of satellite technology in the UK as we do not have the vast open farms of the US and are easier to manage on the ground. The prospect of drones filling the airspace may raise a few safety concerns.

A new way to farm: transforming the agricultural industry

We cannot discuss the introduction of robotic technology without also discussing what they will be replacing. As robotic technology becomes more accepted in the farming industry, lower skilled, manual labour jobs will decrease. While there will be a loss of jobs, they are jobs that many farmers find hard to recruit for.

The agricultural industry relies heavily on Eastern European labour but as economies develop it becomes harder and harder to find labour. Gardner argues that robots will actually pick up tasks that people are not keen on, which in turn will create new careers in the industry.

"The farming world is very much moving towards a world of agricultural technicians rather than farm workers and it will just accelerate that whole process," he says. "So it will be technicians managing these machines and that’s what we already have in terms of the milking robot."

Blackmore agrees with Gardner and states that despite the uptake of robotic technology the rural workforce will not be affected too badly.

"If you want to consider the impact of robots on agriculture I think that it will replace the cheap seasonal labour but I don’t think that the rural workforce will diminish anymore than it already has because huge numbers of people have already left the rural sector and I don’t think that for permanent staff it will get any lower," says Blackmore.

"You still need a farm manager to manage the fields and you still need people to operate the equipment. The change will come where instead of the person being a semi-skilled person hanging onto a steering wheel, we will then have to have more and more highly skilled people servicing agricultural robots. There’ll be a displacement in terms of skills."