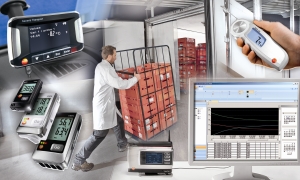 Davies International is one of the leading, most respected names in the specialised transportation of delicate and perishable products. The company has recently enhanced this service with the installation of the Testo Saveris automatic, wireless monitoring system, especially in terms of MHRA (Medicines Healthcare Regulatory Agency) compliance where it is a requirement to track and record temperatures when storing pharmaceutical products.

Davies is based in Fareham, Hampshire, and was founded in 1971 with just two vehicles. It now operates a major international fleet as well as warehousing and storage premises and fleet management, all of the highest attention and specification.

Essentially Testo Saveris is an easily installed radio and Ethernet data monitoring system where temperature and humidity are constantly noted and indicated or alerted as necessary via discreet probes back to the base unit as well as recording the on-going data via a PC.

To indicate the scale of this installation, the base unit with GSM (text alarm facility) is situated in the office at one end of the Davies building. Next to the office is a large warehouse that is divided into two separate smaller warehouse areas. A stainless steel dividing wall separates the two areas. The whole warehouse building is approximately 80m long x 20m wide x 10m high, while each of the two areas is 40m L x 20m W x 10m H. Each area is fitted with floor to roof racking on three levels – bottom, middle and top – and each shelf is used for the storage of pharmaceutical products packed on pallets.

"The Testo Saveris system has enabled us to monitor hot/cold points within our warehouse continually without the need for human interaction."

Five ISO calibrated Saveris T1 probes were purchased and required an Ethernet cable from the base unit out of the office and through the first warehouse section and to the other side of the stainless steel dividing wall, where it terminated with a converter.

The objective was to have two sensors in the near warehouse wirelessly connected to the base unit and the two afar sensors (the two beyond the stainless steel wall) connected via the converter so as to ensure a clear and constant signal.

The annual ISO calibration was carried out by a Testo engineer on-site, which in turn reduced the downtime of the system, saving time and money. The probes were made available on the engineer’s arrival, and were back monitoring after calibration within five hours.

Company director Steven Davies sees the Testo technology as a very positive step. He commented, "The Testo Saveris system has enabled us to monitor hot/cold points within our warehouse continually without the need for human interaction. The software also calculates MKT (Mean Kinetic Temperature) which is vital when assessing the impact on products we store when stored at certain temperatures. It is an improvement that was noted by the MHRA and follows GDP (Good Distribution Practice)."