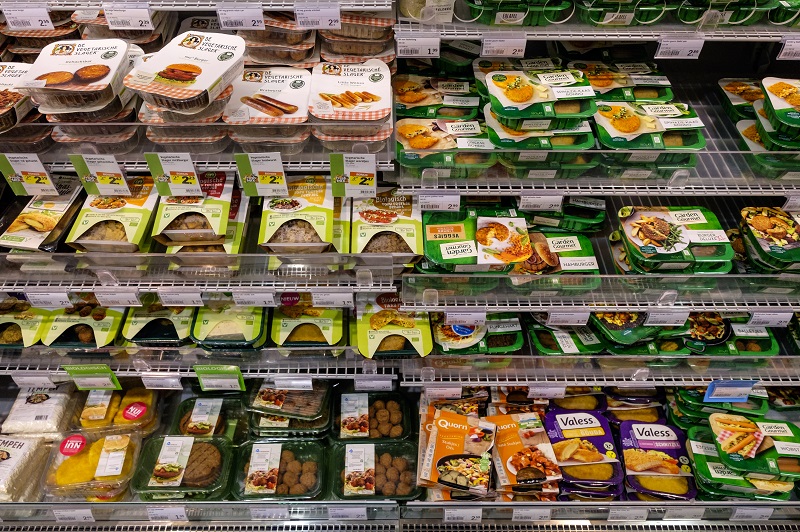 Display with a large collection of vegetarian products and meat alternatives in a supermarket. Credit: www.hollandfoto.net via Shutterstock.

Food science funding is an important factor often neglected in terms of media coverage, and therefore it can be overlooked or misunderstood by consumers and the general public. Some key examples are Solein and Air Protein.

Both of these companies utilise bacteria fed using hydrogen split from water using electricity (known as electrolysis) and carbon dioxide from the air. If the electricity is generated using renewable energy such as solar or wind power, this food source could be grown with near-zero greenhouse gas emissions. This could potentially make it one of the most environmentally sustainable (in terms of land-use, water-use and emissions) food sources ever.

These ‘air proteins’ could be used as alternatives for several products considered unsustainable or unethical. According to GlobalData’s 2019 Q3 Consumer Survey, 89% of global consumers are interested in buying products that are better for the environment or animal-friendly. Palm oil is a current hot topic due to being one of the world’s leading causes of rainforest destruction. These proteins can be used to mimic palm oil as an additive for foods such as pies, ice cream, biscuits, pasta, noodles, sauces or bread, thereby limiting the environmental impact.

A current key trend this month in countries such as the UK and US has been ‘Veganuary’, which has encouraged the consumption of alternative meat products such as soya. This is more sustainable than eating meat, particularly beef, but still overshadows the potential of these scientific breakthroughs which arguably are more sustainable and a more effective source of protein. These proteins could also be used as an analogue for soya to greatly reduce the environmental impact which has been driven by increased demand over the last decade, particularly in the US.

Soy is one of the main meat alternatives and an important component in animal feed due to its relatively high protein content. Air Protein has states that their production time cuts from months, for crops, to hours for their variant. Furthermore, their protein content is around 80% compared with 40% in typical soy protein flour. This demonstrates that these new proteins would be more efficient than using soy for animal feed and may be welcomed from farmers. The media should focus more on scientific advancements relevant the consumer sector to increase consumer awareness and therefore increase the likelihood of funding for such innovations. This could have a more longer-lasting effect on the environment than just reducing personal meat consumption or casual recycling.