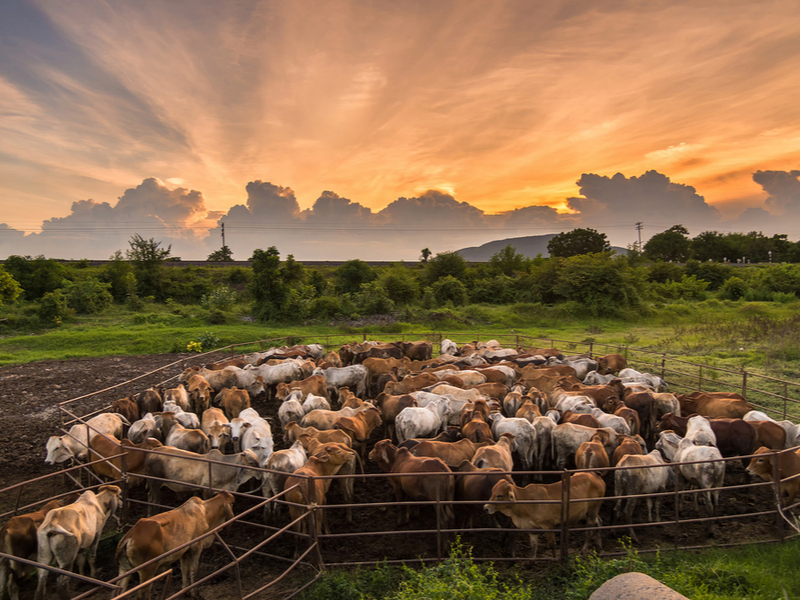 The global livestock industry is responsible for 15% of all greenhouse gas emissions. Credit: martinho Smart / Shutterstock.

Mootral, a British Swiss firm, has produced a feed that reduces a cow’s methane emissions by 30%, which could revolutionise the livestock industry.

The company is based on a proprietary combination of active compounds from garlic and flavonoids derived from citrus and the company’s research shows a nearly complete inhibition of emitted methane in vitro that reaches up to a 38% reduction under real farm conditions.

Mootral wants companies and individuals to offset their carbon footprint by purchasing what it has called ‘CowCredits’ for around £60 ($82), equivalent to one ton of CO₂. The credits are now eligible under the Carbon Offsetting and Reduction Scheme for International Aviation (CORSIA).

The company claims that if the 1.5 billion cows around the world consumed their feed for one year, it would reduce CO₂ output equivalent to removing more than 330 million cars. This is a potentially huge reduction in emissions, which could help mitigate climate change.

The global livestock industry is responsible for 15% of all greenhouse gas emissions (GHGs), which actually makes it the largest contributor of greenhouse gasses after energy and industry ahead of the entire transportation sector.

Cows are the largest source of methane emissions in the world, naturally producing around 500l of methane a day, which equates on average to 3t to 4t of CO₂ per annum.

However, Methane actually has a shorter life span and is 84 times more powerful than CO₂ in the first 20 years, thus on average, a cow emits around 10t to 13t of CO₂ a year.

According to MarketLine data, in 2024, the global meat & livestock market is forecast to have a value of $671 billion, an increase of 11.3% since 2019. Cattle meat is currently the largest segment of the global meat & livestock market, accounting for 41.1% of the market’s total value. As a result, if no action is taken, methane emissions from cows will only continue to rise in the future.

Developing the feed has been costly

Despite the potential of the product, developing advanced feeds such as Mootral is a costly process and it is thought that funding the feedthrough carbon offsetting schemes would be the most effective way on ensuring it is supplied to farmers.

In May 2019, the Swiss Climate Foundation endorsed and decided to help fund Mootral’s efforts to protect the climate and in total, it has raised $7.8m in funding over two rounds. The latest funding was raised on February 29 2020 from a corporate round.

Mootral is now seeking a further $2.5m to close the current seed funding round, with a series A round to follow later in 2021. If the company is able to raise the required funds, it will allow it to supply Mootral Ruminant at no cost to farmers across the world and be a positive step in the fight against climate change.