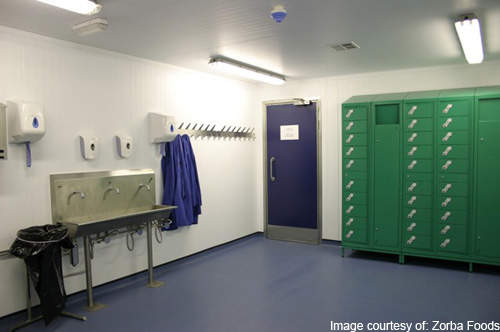 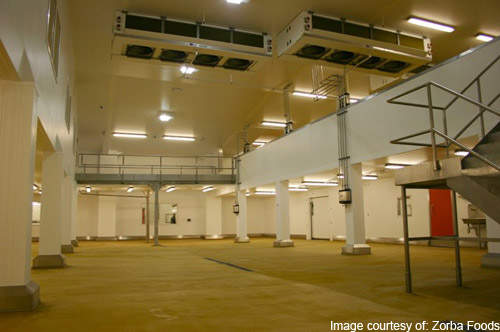 The Zorba facility was expanded in October 2006 into the unit next door and gave the company 40,000ft&#178; of extra space for production. 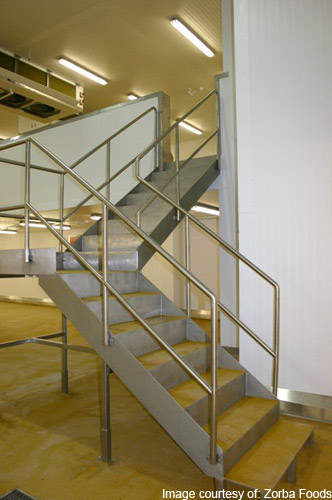 The mezzanine floor in the Zorba facility expansion helped to save space while allowing new equipment to be installed.

The Zorba Foods company was founded in 1976 and began by producing three traditional Greek dips. 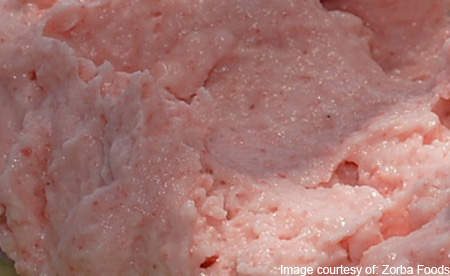 Zorba's dips and deli spreads are packaged in formats from 40g pots up to 2kg tubs.

The company produces an extensive range of premium dips, spreads and deli sandwich fillings for UK supermarkets such as Tesco and ASDA.

The company was founded in 1976 by Robert Barbikan, a Greek who immigrated to London and identified a gap in the market for traditional Greek dips.

The firm started by manufacturing three products, houmous, taramasalata and tzatziki, using traditional family recipes. The company is now a subsidiary of the larger Entrepreneurial Food Group based in the US.

In June 2010, Zorba Foods won the gold award at The Grocer Own Label Food & Drink Awards for its Moroccan style houmous.

The expansion of the premises in 2006 came about because of a high demand from customers (supermarkets) for shelf-ready products, which required investment into new equipment. The expansion was also prompted by the company outgrowing its old premises and needing extra space to increase production.

Consequently, the company was able to buy an empty unit next to the existing premises.

In November 2010, Zorba Foods undertook another expansion of the facility to meet the growing demand for its chickpea-based houmous. About 40 new jobs were created by the expansion, bringing the company’s total workforce to 220.

In October 2006 Zorba Foods contracted Chalcroft Construction (Chalcroft Food Projects), based in Pershore to help them design and construct a state-of-the-art facility to produce premium dips and spreads. The engineering design of the expansion was carried out by David Trundley Design Services.

“Zorba expanded because of a high demand from customers for shelf-ready products.”

The investment for the expansion came to around £2.8m. This involved the expansion of the production floor and the provision of new office space. The additional unit gave the company around 40,000ft² of extra space: 3,100m² on the ground floor and 1,100m² on the first floor.

The fit-out part of the project for Zorba included the installation of new mezzanine floors, fully refrigerated high and low-risk production facilities, cold chamber, blast chillers and also the new offices and services area. The work took six months and was completed and in full production by the start of 2007.

Chalcroft Construction was also contracted for the 2010 expansion. The company added 8,000ft² of space to the facility, increasing its total size to 100,000ft². The expansion was completed within 15 weeks, which was two weeks ahead of schedule. Low care and high care areas, a mezzanine floor and blast chillers were added to the facility as part of the expansion.

The Zorba Foods expansion in 2006 was partly the result of new contracts for ASDA requiring shelf-ready products (SRP). SRP is much more convenient for retailers and can be used to enhance the display of a complete range of retail products; it can also provide an ideal way of reinforcing the brand message at the point of purchase.

As part of the fit-out of the expanded facility Zorba had a mezzanine floor installed to increase the floor space.

This meant that four boxmakers (tray erectors) from IBS (Sweden) (supplied by DS Smith Packaging) could be installed, but that there would also be enough floor space retained for production.

The facility has a conveyor system taking erected boxes down to the production lines for filling, shrink wrapping, palletisation, storage and eventual shipping.

The dips and spreads are packed in pots from 40g (for individual dips), 170g, 200g and 300g (supermarket formats) up to 2kg tubs. The supermarket pots are packed in trays using two corrugated outers, one of which includes a tear strip for easy opening.