Lion inaugurated its re-developed cheese factory at Burnie in May 2015. Image: courtesy of Lion.

Lion decided to re-direct its investment in world-class manufacturing into a single site. Image: courtesy of Lion.

The Heritage has a capacity to produce 26,000t a year of cheese. Image: courtesy of Lion.

The Heritage produces 14 varieties of cheese following the re-development and expansion. Image: courtesy of Lion. 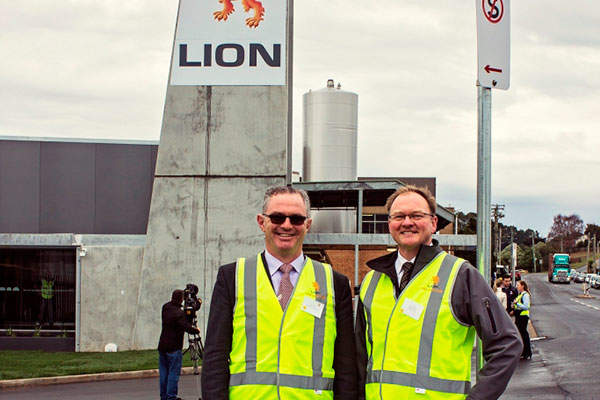 Australian food and beverage company Lion commissioned the expansion of a speciality cheese manufacturing hub named The Heritage in Burnie, Tasmania, in May 2015.

The facility is located at 145 Old Surrey Road, Burnie in northwest Tasmania, approximately 3km from the Bass Highway. It was re-developed to increase capacity and integrate the latest manufacturing facilities.

The expansion and re-development have made the site the biggest speciality cheese manufacturing facility in the Southern Hemisphere. The project was implemented with an investment of $150m, using $1.5m of public funding from the Tasmanian Government.

The project has increased the site’s annual processing capacity of fresh milk sourced from dairy farms located in Tasmania to approximately 145 million litres, the annual cheese manufacturing capacity to 26,000t and the number of cheese varieties produced at the site to 14.

The Heritage site was originally set up by Milan Vyhnalek in 1955, producing 50t a year of hard cheeses.

Dongrain acquired the facility in 1981 and introduced soft-ripened cheese in 1985. National Foods further acquired the site in 2006 and merged with Lion Nathan in 2009 that led to the re-branding of the company as Lion in 2011.

Since 2012, Lion produced 11,000t a year of semi-hard and soft-ripened blue and white cheeses, as well as cream and club cheese by processing approximately 80 million litres of milk a year from the Burnie site.

Following a six-month review in February 2011, National Foods decided to merge all of its manufacturing sites in Tasmania, excluding sites of the King Island brands, into a single site.

The decision was taken because operating multiple manufacturing sites was found to be unsustainable.

Details of The Heritage project

The project primarily involved the expansion of the main building’s floor space by 10,000m². The building is approximately 15m high at its highest point and the milk storage silos are approximately 25m high.

With the expansion, the building is split into three levels. Level 0 accommodates a palletising and product loading area, as well as areas for cold storage and milk processing. An undercroft area will facilitate forklift movements.

Level one includes areas for new pressed cheese (brine), maturing, soft-ripened cheese production, packing and employee transition, and the new Centre of Excellence (COE) for Research and Development (R&D), as well as production of small quantities of innovative products.

The new milk unloading, dangerous goods and whey storage buildings have been constructed adjacent to the main building. Existing power, water and gas facilities, including boilers and milk storage silos continue to operate and complement the infrastructure.

The project also involved the construction of a new wastewater treatment system (WWTS) that features ADI Systems’ proprietary anaerobic ADI-BVF digester and a new permanent vehicle entry at the northern end of the site.

The cheese manufacturing process at the site begins with unloading milk from tankers followed by a laboratory test.

Milk is pasteurised by heating up to 72°C for a minimum of 15 seconds to kill harmful bacteria, followed by rapid cooling.

The fat and protein content of the milk is standardised by separation, concentration and blending processes for manufacturing different types of cheeses.

The standardised milk is pumped into cheese vats and starter culture is added to convert the milk sugar to lactic acid. Rennet is added to coagulate the milk, which is further cut, stirred and held.

Coagulated milk is filled into hoops, left to drain for a set period of time and further immersed in a brine bath for a specific time period, depending on the characteristics required. The cheese finally undergoes maturation, prior to packaging and chilling.

Long hold cheeses produced at the site are conveyed to the De Bruyns cool store in Wivenhoe for maturing. Soft cheeses are refrigerated on-site to be shipped to Melbourne for distribution.

The project definition and all statutory approvals, including design and documentation works, construction management and supervision services, were rendered by pitt&sherry.

A floating membrane cover system for the treatment plant’s digester was designed and installed by Geomembrane Technologies (GTI).

Fairbrother Construction was the construction contractor for the project. Zaganite Coatings installed epoxy flooring to the main production floors and acid bunds.