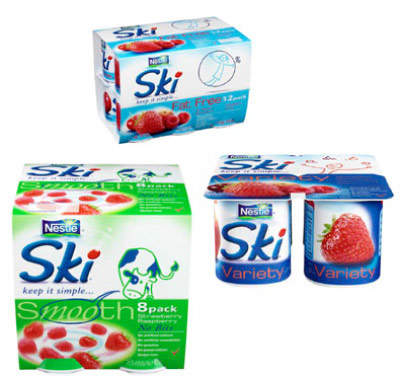 Some of the Ski brand products produced at the plant. 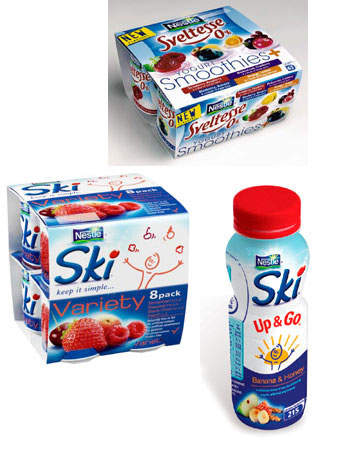 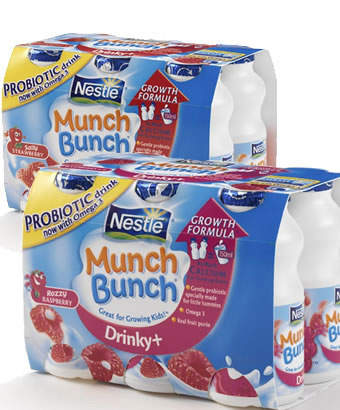 The Nestle chilled liquid foods processing plant at Cuddington in Cheshire was purchased from Northern Foods along with the well known Ski yoghurt and Munch Bunch brands, for £145m in February 2002.

The deal also involved the transfer of around 300 staff, although some of these were made redundant during restructuring in October 2002. The facility, which was constructed in 1991, produces over 50,000t per annum of Ski, Munch Bunch and Sveltesse yoghurts.

The plant currently employs 130 staff, and currently 80 members of staff are production workers and engineers.

“The facility, which was constructed in 1991, produces over 50,000t per annum of Ski, Munch Bunch and Sveltesse yoghurts.”

The first problem was to provide a stabiliser mix plant consisting of two big-bag powder dischargers, emptying into a powder weighing vessel, a high shear vacuum for incorporating the powders with liquid additions as well as for transfer to the yoghurt mix process.

The weighing and mixing sequences were to be sized to provide a hold-time for hydration before transfer to the yoghurt process. The whole package was designed to be system controlled from an Allen Bradley PLC with a local operator screen and an interface with the existing Accos plant control.

In addition, Nestle needed to modify an existing Erca filling line from four pot filling to six pot filling; this included an additional fruit-dosing station, coupled with process modifications at the filling machine to feed yoghurt and fruit to the new filling head – including clean-in-place (CIP) systems.

For Nestle the key issues were speed of installation so far as the fruit-dosing station was concerned – it needed to meet launch dates for new yoghurt packaging – and quality control with the mix plant by changing from bulk preparation to a batch-by-batch system, preparing only as much at a time as is needed.

CPS sent a five member site-crew to carry out the modifications and installation. The Erca installation was all in a day’s work, and they even assisted the engineer from French company Erca Formseal with his part of the project.

Pete Slater, the Nestle project manager, said: “They did excellent work… The installation was completed professionally, on time and to the highest levels of workmanship within a tight time frame. In addition they did lots of work for Erca which was also a great help to Nestle.”

CPS worked with Erca Formseal and also with PCM Dosys to integrate new equipment into the existing plant (DosyFruit fruit dispenser) and to manage site issues arising from contracts with Nestle. CPS was contracted to manage and co-ordinate the various activities and was successful in meeting all of the required project deadlines.

CPS has recently been acquired by Tetra Pak and the name of the business has changed to Tetra Pak Cheese and Powder Systems.

MSA Environmental was asked by Nestle in 2003 to update the wastewater treatment systems at the Cuddington plant. The uprated plant can handle 5,240kg COD/day and 1,230m²/day; final effluent standards of 20:30:5 (BOD:TSS:NH3-N).

The cost of the project was £1.8m and the new plant consisted of anoxic zone, pre-mixing sump, 13,000m³ aeration lagoon, 15m diameter settlement tank and a tertiary sand filter. The new plant replaced an old high rate filtration and percolating filtration system, with the existing crude effluent balancing facilities still in use. A DAF system was also made available to further increase the overall loadings to the plant.