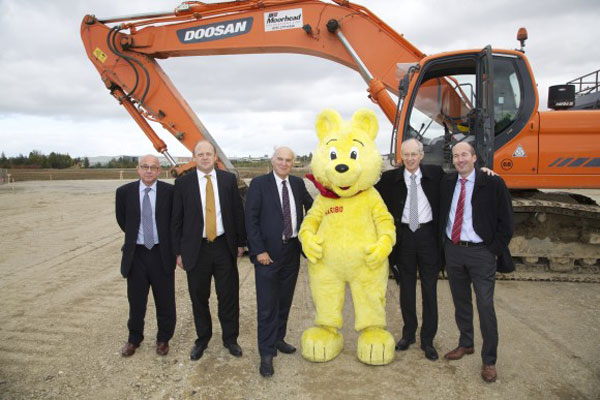 The construction of the new confectionery production plant at Castleford began in October 2013. Credit: Haribo Dunhils,

Haribo started construction on a new confectionery production plant in October 2013 at Castleford in Wakefield, UK. The new factory will be situated near junction 31 on the M62 motorway, which is close to Haribo’s existing base at Pontefract in west Yorkshire.

Building work is expected to be completed by April 2015, and the first two production lines could be fully operational by the end of 2015. It will provide employment to 286 people.

Details of the Haribo confectionery facility

The facility will have a total floor space of 30,700m², with a three-storey manufacturing unit and a four-storey office building. Once it becomes fully operational in 2015, it will produce about 48,000t of confectionery a year, including popular Haribo products such as Tangfastics and Starmix.

“The new factory will produce about 48,000t of confectionery a year.”

It will increase Haribo’s production capabilities in the growing UK confectionery market, and has a provision for expansion.

The first phase of construction, which began in October 2013, includes the building of a reinforced concrete frame structure with three floors. The first stair core was finished in March, while work on the concrete framed first and second floor columns, as well as the energy centre and a sub-station, is also underway.

The later phases will include three more production buildings and a 30m clad-rack automated warehouse.

The new facility will be equipped with state-of-the-art general mechanical and electrical equipment. It will feature a packaged chiller to provide chilled water, a dual-fuel steam boiler, and compressed air. It will also have a combined heat and power (CHP) engine that will serve as a primary source of energy for the mechanical services and also help power the production process.

The plant was designed by architects Harris Partnership in collaboration with JPG, a civil and structural engineering provider.

JPG provided substantial design work to support the four production buildings and the energy conservation centre, as well as designs for silo buildings, a dispatch building and a gatehouse.

“The plant was designed by architects Harris Partnership in collaboration with JPG, a civil and structural engineering provider.”

Wates Construction was awarded a £35m ($58m) design and build contract that includes construction of a three-storey manufacturing unit and four-storey office facility.

The total estimated investment is £92m ($109m). However, the UK Government is providing £6.4m ($7.6m) under the Regional Growth Fund (RGF) round 1, which was set up in 2011 by the Department for Business, Innovation and Skills with the aim of creating new jobs in England.

Haribo, headquartered in Bonn, Germany, is a leading confectionery company that produces and distributes fruit gums, liquorices and foam-based sweets. The company has 18 production facilities in Europe, five in Germany, and sales offices in the US and Europe.