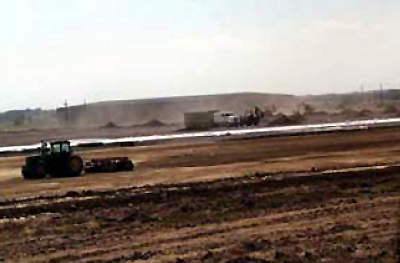 Ground clearance was completed in a short time although the site is enormous. 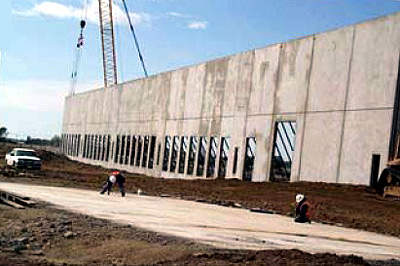 Many of the walls and panels of the building were modular. 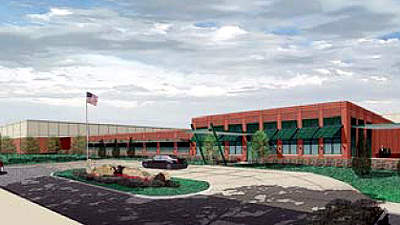 An artist's rendering of the new facility.

MidAmerica Industrial park also carried out a lot of infrastructure improvements for Gatorade.

In June 2006 PepsiCo chose a 165-acre site along Highway 69A in the MidAmerica Industrial park at Pryor, Mayes County, Oklahoma, as the location for its new $180m manufacturing and distribution centre for Gatorade and Propel Fitness Water. The 1.5 million-square-foot plant was constructed on a fast-track schedule and was operational by September 2007.

In February 2010, PepsiCo announced its decision to shut down the plant due to weak production rates. PepsiCo will wind up operations at the plant in the next few months and maintain the equipment at the facility until a new employer takes over.

The plant has a dedicated area of 37,000m2 to the manufacture of PET bottles, with 102,200m2 used for warehousing and distribution. There are four full-time filling lines at the plant filling 3,000,000 bottles of Gatorade and Propel water each day.

The facility is the ninth distribution and manufacturing operation for Gatorade in the US.

The plant opened on schedule in September 2007. By December 2007 an expansion project to install four new filling lines was announced. The expansion was completed in March 2008.

“In February 2010, PepsiCo announced its decision to shut down the plant due to weak production rates.”

New technology is being used at the plant which fills the bottles at higher speeds. The Krones equipment fills bottles at a rate of 1,200 per minute as opposed to the earlier 800 per minute.

In addition, Tiger Woods signed to promote Gatorade and had a Gatorade sub-line called Gatorade Tiger. The line had three special flavours and used a new bottle design and a new format. Gatorade Tiger flavours, inspired and selected by Tiger himself, included cherry blend, citrus blend and grape and was packaged in a 500ml bottle and a 32oz bottle.

In December 2009, company officials confirmed that the Gatorade sub-line, namely Gatorade Tiger, will be discontinued. The company said that it is discontinuing the brand to make room for other new products in 2010.

MidAmerica is a 9,000-acre manufacturing, processing and distribution centre located south of Pryor. First built over 46 years ago (founded in 1960), the park has four-lane access to major transportation routes both nationally and statewide (including an airpark and quick access to the Tulsa Port of Catoosa). The park also has low-cost electricity from Grand River Dam Authority and an abundant water supply fed by Grand River.

The park now has a 365-acre regional business airport with a 5,000ft runway, and owns the wastewater and water treatment plants. Over 70 firms are located within the industrial park, including operations of eight Fortune 500 companies. Chris Weber, plant manager of the new Gatorade facility, said the Pryor site was chosen because it lies in the heart of the new facility’s distribution area. In addition, the water and electrical power (supplied by PSO) are cheaper and the construction site was well prepared, flat and ‘shovel ready’.

Groundbreaking for the new facility took place in mid-July 2006. The new facility was built on a fast-track construction timeline with the intent to be in operation by September 2007. The design builders for the project were the Haskell Company (195 workers on-site).

Planning permission was granted almost immediately by the park after seeing the plans and the park also made some infrastructure improvements to allow for the facilities that the massive Gatorade plant needed.

“The plant opened on schedule in September 2007.”

A 14in waterline was rerouted around the Gatorade property to make way for construction and a Sequential Batch Reactor (SBR) waste treatment plant was constructed.

In addition, a new 24in wastewater line project was installed for Gatorade. This was a two-segment undertaking to construct a 24in gravity flow sanitary sewer.

Segment one carries wastewater from the Gatorade plant down to a raw sewage pump station. Segment two carries the raw sewage eastward and ties into MidAmerica’s main sewer collection system. This was undertaken by Crossland Heavy Contractors.

The project required there to be 35 pieces of major equipment-scrapers, dozers, and dump trucks on site. There was 1,500ft of domestic water line laid along with 5,800ft of process and sanitary sewer. The building itself has required 14,000ft of curb and gutter with 20,300ft of storm and roof drainage pipe.

During ground preparation 400,000yd³ of dirt, including topsoil removal were moved in excavation, 23,000t of lime-kiln dust was used for soil stabilisation and 50,000yd³ of concrete was poured for the base and foundations, which also required 110,000t of aggregate base course and 300,000t of gravel. Over 93,000yd² of asphalt paving were laid for the shipping areas.