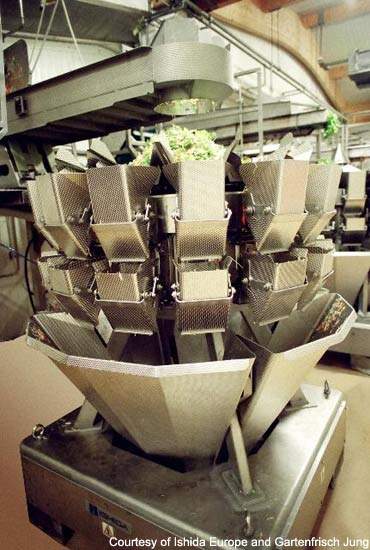 The new R-series machine joins six others already on the salad line at the Gartenfrisch Jung facility. 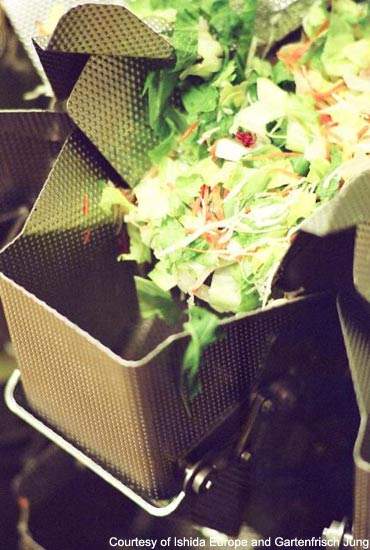 Salad must be shipped with at least five days of clear shelf-life for the retailer; speed is therefore incredibly important for the Gartenfrisch operation. 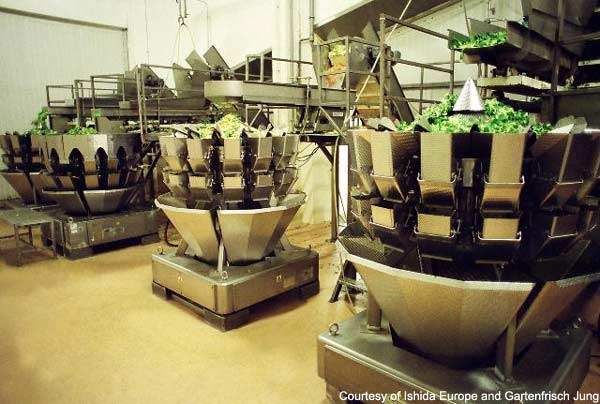 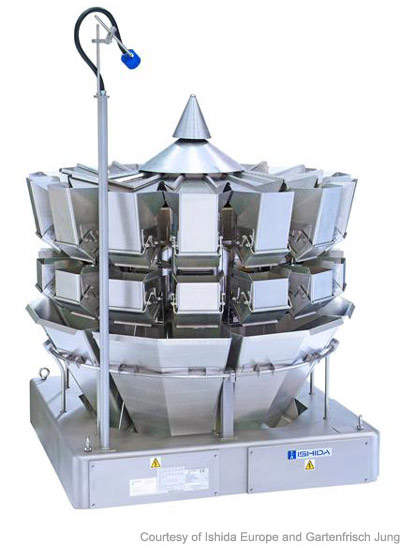 The R-series machine from Ishida has introduced a number of new advances to save on giveaway and also to increase speed with no loss of accuracy.

The consumer popularity of bagged salad leaves and prepared vegetables is growing more and more. The majority of retail supermarkets across Europe and the UK carry these products.

Germany is no exception and one of the biggest companies involved in the preparation and bagging of fresh salad vegetables is Gartenfrisch Jung, which is based in Jagsthausen, Baden-Württemberg, in southern Germany.

Gartenfrisch Jung produces in excess of 50,000 bags and 36,000 trays of salad per day for the German retail market and also 25t of salad vegetables for the food service and catering trade. The company sources its produce from local farmers in season and then from southern Europe and North Africa out of season.

Gartenfrisch approached Ishida Europe with two problems: the company needed to maximise the yield of bagged salad output from the facility and also to cut down on the giveaway in each salad pack which was cutting into profits. Gartenfrisch had already been using an older 14-head Ishida RZ machine at its facility for the past ten years, with a speed of 65wpm.

Ishida was asked to provide a trial to compare its new R series 14-head weigher against the older model; Gartenfrisch already has six Ishida weighers and all of these are in full reliable operation. The new R-series was able to provide better results.

From the same amount of salad mix material under identical conditions, for every 40 bags of prepared salad produced the new R-series was able to produce one more than the older machine and giveaway was reduced by an average of 2.5%. All of the packs were check-weighed to determine the actual weight after passing through the multi-head weigher. The conclusion drawn was that average weight variation on the new machine was much smaller and accuracy was achieved that had not previously been possible when processing and bagging salad leaves and mixes.

ADVANTAGES OF THE R-SERIES

The R-series multi-head weighers are now much more accurate because of the new design in their electronics and software, which has increased the number of possible weight combinations that are available during each of the weighing cycles to 16,000 and multiplied by a factor of 80 the calculating power of the CPU (rapid combination calculation system). This new sophistication means that the machines can be much faster with no quarter for loss of accuracy.

“The new multi-head weigher has brought an increase in speed for the Gartenfrisch salad operation.”

Salad leaf packing can also have other problems, such as where the leaves stick to metal surfaces during bagging, causing obstruction and because they are so flexible, the leaves can absorb the high levels of vibration used to dislodge them without effect. Ishida has introduced a system in the CCW-R machines for salad leaves called pulse width modulation technology. This gives stronger and more variable vibration levels and also more steeply sloping feeder hoppers in the weigher, along with ‘dimpled’ metal anti-stick contact surfaces.

The new multi-head weigher has brought an increase in speed for the Gartenfrisch salad operation and it is now 10% faster than previously; missed cycles are eliminated from the process. Speed is of the essence in the operation because the perishable products need to get to the retailer with five clear days of shelf-life.