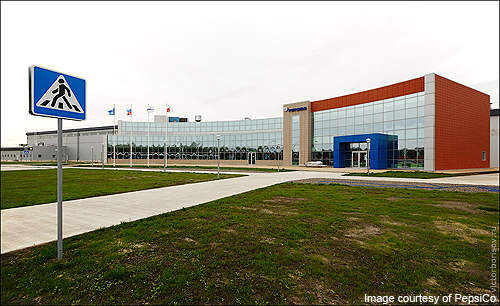 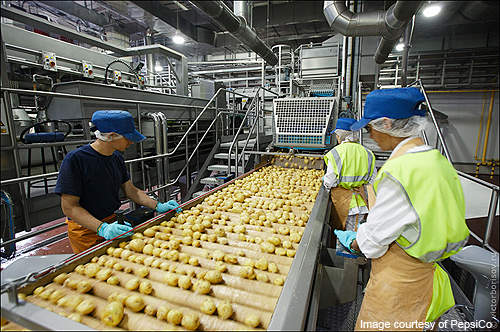 The cleaned potatoes are inspected before being made into chips. 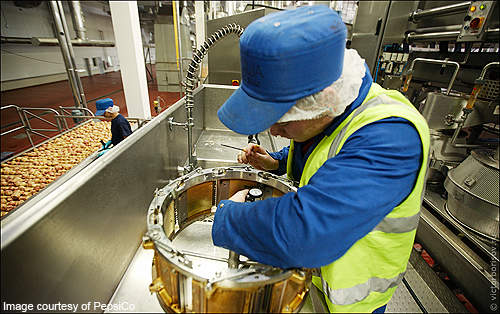 Around 85% of the potatoes processed at the plant will be grown locally.

In December 2010 PepsiCo’s Frito-Lay inaugurated its potato chips plant in Azov, Rostov region, southern Russia. PepsiCo announced its plans to build the factory in June 2007 and construction started in October 2007. Test production was conducted in November 2009 for the final tuning of the equipment.

The plant cost $110m to build and is equipped with processing and extruding technologies. The factory is the company’s second snack plant in Russia. The first PepsiCo plant was built in 2002 in Kashira, Moscow.

The factory is equipped with extruding technology for the production of corn chips and crispy bread snacks. It is 30% more efficient, consumes fewer resources and generates less waste than the Kashira facility. It also recycles the water used in the production process.

“The plant cost $110m to build and is equipped with processing and extruding technologies.”

Around 85% of the potatoes processed at the plant will be grown locally, providing a boost for local agriculture. Six large farms in the Rostov and Krasnodar regions supply potatoes to the plant.

The company provides consulting services, finance, seeds and equipment to the farms for improving efficiency. Between harvests, potatoes are imported from the Middle East and Central Europe.

PepsiCo is also building a $140m beverage plant at the site, bringing the total investment to $250m. It is expected to produce 500 million litres of iced tea and other soft drinks by spring 2013. The two plants will employ about 1,000 people and pay an average salary of $930 per month. The company is also planning to build a warehouse and another plant in Rostov by 2015.

The Azov site was chosen due to the availability of utilities and abundance of locally grown potatoes. The region has access to customer distribution networks and therefore offers low transportation costs.

Improvements to roads, rail links and utilities to support the project were was completed by the regional authority at a cost of $1.67m.

Nine 20t trucks unload potatoes at the plant every day. The potatoes are conveyed to a closed container washing machine and cleaned by water recirculation. They are then stored temporarily in special tanks. The tubers are sorted and then conveyed to abrasive drums for cutting into 2mm slices.

“The plant has been designed for an initial annual production capacity of 25,000t.”

The slices are fried in oil in the production line for three minutes. Spices and flavourings are then added. The product is then weighed and packaged through a fully automated process. The weighing and packaging equipment operate in sync at a rate of 80 packages a minute. The packets are transferred to cardboard boxes and then sent to the warehouse.

The plant also has a line for producing croutons. Flour mixture and water are fed to the extruder and heated. Bundles of dried flour are then cut and dried in oven. They are then flavoured and packed.