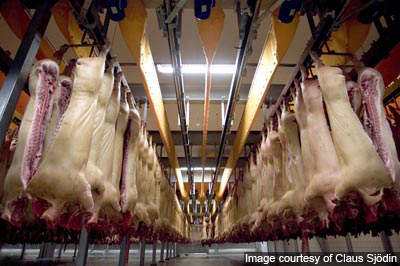 Danish Crown's new pork processing plant at Horsens, Denmark, was inaugurated in May 2005. 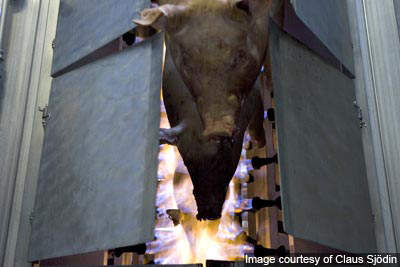 Pigs are slaughtered and the hides dehaired in the killing lines. 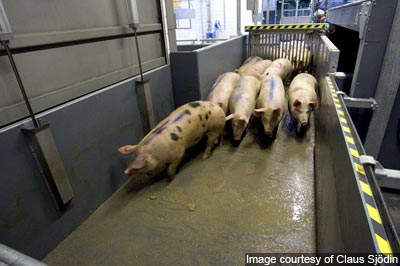 Pigs are kept in a lairage system before being guided into stunning pens for slaughter. 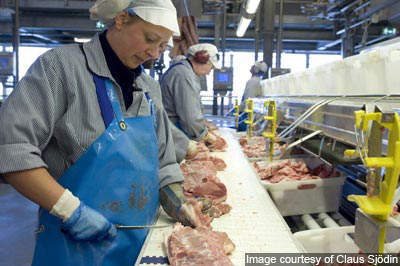 Most employees at the plant work at the processing and cutting stations. 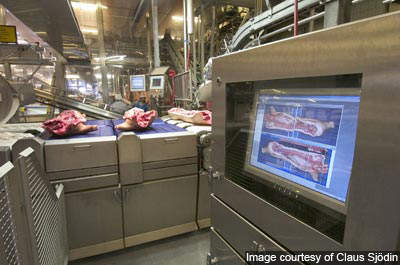 Every processing area has its own database, which allows production to continue in the event of problems with the primary system. 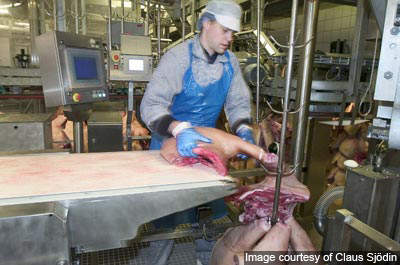 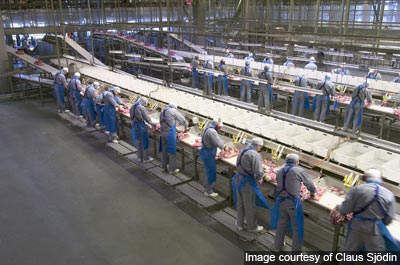 The new plant is believed to be the largest pork processing facility in the world. 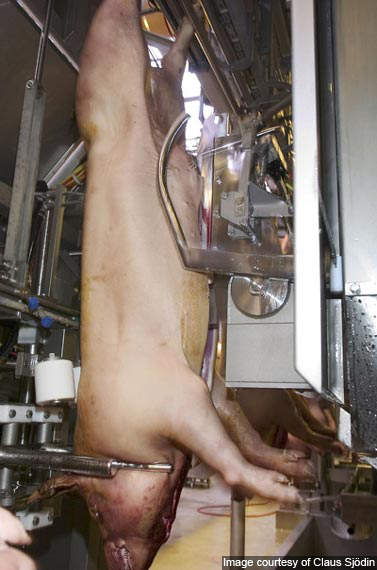 The plant can slaughter 78,000 pigs per week using the highly automated slaughter line. 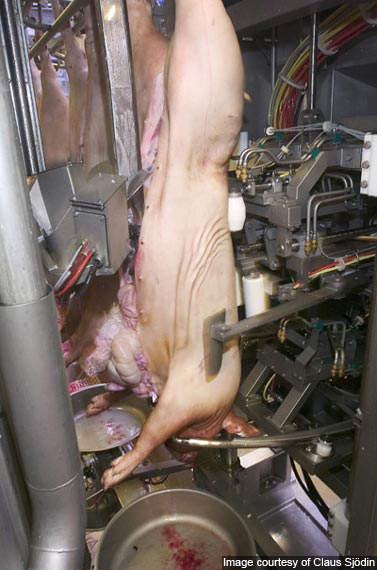 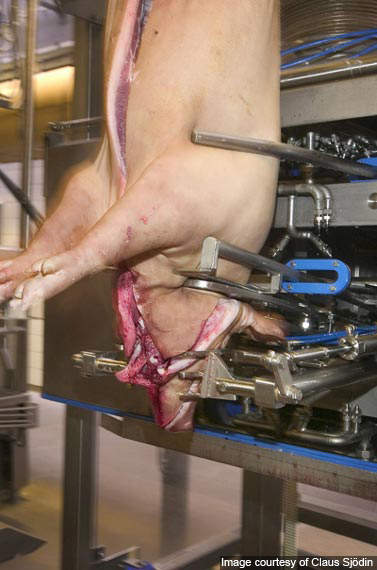 Slaughter records for each of the animals are created, beginning with RFID tag scans.

Danish Crown broke ground on the construction of a new pork processing plant at Horsens, Denmark, in August 2002. The construction and installation work was completed in late 2004. The facility was inaugurated in May 2005 and is believed to be the largest and one of the most automated pork processing facilities in the world. The plant even has a visitor’s centre where the full process can be observed, from slaughter to dressed cuts of meat.

The plant was originally commissioned as part of a modernisation and consolidation process by Danish Crown. The company has now closed the slaughtering lines at several of its other plants, including the existing Horsens plant and the facilities at Lemvig, Struer and Hjorring (closed in May 2005) and transferred their work to the new plant.

“Danish Crown broke ground on the construction of a new pork processing plant at Horsens, Denmark, in August 2002.”

When the plant first opened there were some teething difficulties and confusion over pay rates, which led to short-lived strike action involving 370 of the employees.

SFK Meat Systems A/S of Kolding, Denmark, supplied the slaughter line equipment. The company also supplied some of the internal transport systems and all of the equipment for the by-product department. The contract was worth DKK250m. The plant can slaughter 78,000 pigs per week using the highly automated slaughter line, which makes use of robotic technology.

Taifun Engineering Oy Ltd. was chosen as the subcontractor / supplier to build technology for conveying, collecting and handling of by-products of the new plant. Taifun provided their vacuum technology to exceed the hygiene requirements.

The by-products are immediately carried away from working points eliminating the risk of cross-contamination (bins and trolleys were not required). Taifun delivered a whole system of suction points, pipelines, vacuum ejectors and other related equipment. Beritech, a Danish company, installed a waste handling and blood storage system for the plant.

The stall area at the plant can house 3,800 hogs. When the hogs arrive at the plant, vets check them for their health and fitness. If a hog is not found to be healthy, an additional check is conducted in a stall area before slaughter.

The slaughtering facility consists of several sections. First a lairage system, where the pigs are kept prior to slaughter before being guided into stunning pens (a CO2 group stunning system is used as it creates less stress in the animals prior to processing). Then there are the killing lines where the pigs are slaughtered, scalded to kill bacteria and the hides flamed and dehaired. The automated dressing lines consist of several systems of robots which eviscerate, dress, debone and clean the carcasses:

The chill tunnels and chill rooms are where the carcasses are cooled down to processing temperature; cutting and deboning are easier to carry out at lower temperature. The carcasses are then processed into cuts of meat for bacon and ham; this area is where the majority of personnel are situated and assisted in their work by automated transport trays and conveyors for cutting and sorting meat and bone. The products must then be efficiently packaged and stored at low temperature prior to further processing or transportation.

The Danish Meat Research Institute (DMRI) has conducted several projects at the plant in conjunction with machinery manufacturers to develop new methods and technology. One example of this is carcass transfer where a height adjustable multi-hook system was developed to make handling and processing easier.

“The facility was inaugurated in May 2005 and is believed to be the largest and one of the most automated pork processing facilities in the world.”

Univeyor was awarded the contract for the supply of a fully automatic palletising installation for the new plant. The turnkey palletising system covers the entire product flow from automatic registration of boxes of meat products at the final stages of the production line to automatic sorting, palletising, wrapping products in plastic film, storage in cold rooms and sorting for dispatch.

The packaging warehouse was also fully equipped by Univeyor. The Univeyor system has a capacity of 3,000 boxes or 110 pallets per hour. The contract was worth DKK40m.

TAC obtained the contract for the complete building IT solution for the new plant. The contract was worth DKK20m. TAC supplied IT for the entire plant including operations, quality control, maintenance, safety and surveillance. Priority was given to making the plant highly energy efficient and environmentally safe. The IT system is able to monitor and report regulatory information, such as temperature, during a production run.

ABB of Ohio, USA, was given a contract to supply an Industrial IT Enterprise Historian for the plant. This is a software system based on the idea that a company’s automation and information technologies must be connected in real-time so that information is readily available at any location. The system allows optimisation and planning of production and also helps the traceability of goods through the production process. The contract was worth $2m.

Traceability is extremely important at Horsens particularly as they are now processing an increasing quantity of organic pork at the plant. The company is aiming to double its production of organic pork over the next five years. Danish Crown is now expanding the retail area of its business (moving closer to the consumer) and not just producing pork for third party food manufacturers.

“The company is aiming to double its production of organic pork over the next five years.”

At the heart of the IT system are two main databases to which the business and process systems interface. The real-time database can process up to 50 transactions per second and store up to 1GB of data per week. This services PLC, SCADA and other equipment in the processing area.

Real-time data are then regularly backed-up to a long-term database, where all information older than a week is stored. The long-term database only makes data available for reports and other regulatory enquiries.

Invoicing systems, warehouse management and the Systems Application and Products (SAP) enterprise resource planning functions are integrated with production data through an SQL server interface. The main component of the system is the Advanced Manufacturing Execution System (AMES) concept, which improves data exchange between the business and facility-floor systems.

Every processing area has its own database, which allows production to continue in the event of problems with the primary system. One pig is slaughtered every four seconds. Slaughter records for each of the animals are created, beginning with RFID tag scans. This allows the carcasses to be tracked in real-time, wherever they are in the process. Data are recorded locally and later appended to other information in the processing database.

Mont Systems provided the plant with a contactless chip technology card system (Mifare) for the employees to gain entry to the plant (security), clock-in and also for use as a payment card for vending machines (drinks and snacks) and to pay for lunch in the facility canteen.