About seven million pounds a day

The Sacramento plant can process about seven million pounds of almonds a day. 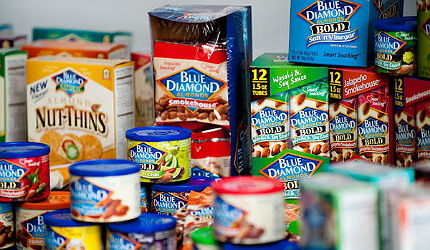 California-based co-operative Blue Diamond Growers, founded in 1910, is one of world’s largest almond processors and marketers. It was formerly known as the California Almond Growers Exchange.

In June 2009, Kellogg’s announced an expansion of its manufacturing plant in south Augusta, Georgia, US.

The five-storey Sacramento almond processing facility was built in California, US, in 1920. The Salida plant on a 39-acre site was built in 1968.

The American Council for Food Safety and Quality (DFA) awarded ‘Plant of the Year of the Pinnacle Club’ certification to the Sacramento plant in 2011.

"Blue Diamond Growers processes almonds to meet a wide range of applications, including bakeries and confectioneries as well as snacks."

The plant is located in midtown Sacramento. The processing plant and associated administration facilities sprawl across a 90-acre site. The facility has slicing, flavouring and other processing units. It employs about 1,000 workers and operates for 22 hours a day.

Blue Diamonds was the industry’s first company to install commercial scale almonds sheller, grader, continuous blanching, roasting and salting lines at the plant, in the 1920s.

An in-line oil treatment facility was installed in 2009. New roasting technologies and a high speed pouch line were installed in 2010. Blue Diamond conducts about 2,000 quality tests a year before the shipment of the products.

The packaging line can fill, label and package cans with almonds in. The almonds are manually sorted on the conveyor belts in specialised rooms.

The almonds are processed to give them different flavours such as honey, butter, salt and vinegar and seasoned snacks. The rich source of Vitamin E, fibre, protein and magnesium of the almonds is retained. The plant processes about seven million pounds of almonds a day.

"The five-storey Sacramento almond processing facility was built in California, US, in 1920. The Salida plant on a 39-acre site was built in 1968."

The laser electronic sorting machine, which uses Belgian Electronic Sorting Technology (BEST), removes the foreign material and low quality nuts from the almonds transferred from the huller. The nuts further undergo manual sorting where the almonds rejected by BEST are sent to the Salida processing facility.

The almonds move through Mechanical Gravity Table from Crippen Manufacturing. The almond butter line can process at a flow rate of 1,500lb to 4,000lb an hour. It can fill 32 to 45 jars a minute. The can line produces 240, four pound cans of blanched almonds a minute. About 45 million cans are produced annually. The retail packages and jars are flushed with nitrogen to extend the life of the product to 12 months.

The automated Vertical Form Fill and Seal Machine at the plant can pack 50,000lb of almonds in an eight hour shift. The line has a bag inserter, carton erector and palletiser producing bags at a rate of about eight every minute. An automated shutter palletiser was installed at the Sacramento plant in 1996. The system can accumulate almond packages from five different production lines. The palletiser, from Priority One Packaging, arranges the 15lb to 50lb packages in layers.

Foxjet supplied the ink-jet coding system that uses software to print bar codes and lot numbers on corrugated packages. Bar code scanners were supplied by Accu-Sort. The automated system eases the packaging and labelling of cases running on conveyors.

The co-operative started construction on a new 46,450 square metre almond processing facility on an 88-acre site in Turlock, California, in January 2012.

The new facility will be completed in three phases with the first phase coming online in May 2013. The investment is part of a 15-year expansion strategy which also includes upgrades to the Sacramento and Salida facilities and expansion of the R&D capabilities.

The state of California produces about 80% of the world’s almonds. It exports almonds to 95 countries across the globe as well as supplying them to the 50 states of the US.

It currently has a $4bn almond market. The company expects that demand is expected to reach two billion pounds by 2014.