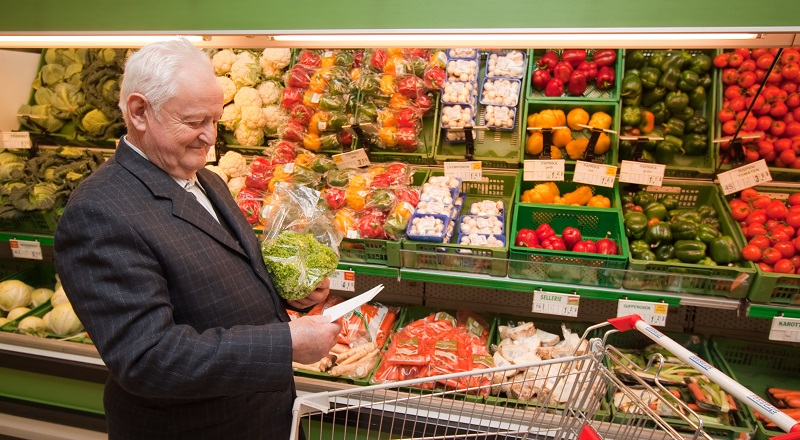 Perhaps one of the reasons we don’t do more to combat malnutrition in the elderly is because as a society we expect people to become delicate and frail as they age.

We’re probably all guilty of this kind of prejudice. Ask me to think of someone over 65 and my mind doesn’t conjure up a fit and vibrant Helen Mirren, what I think of is someone struggling to maintain the independence that characterises youth. And that’s wrong.

Perhaps that’s part of the reason that according to the Malnutrition Task Force an estimated 1.3 million people over 65 suffer from malnutrition and the vast majority of those live in the community amongst family, friends, and neighbours who are either unaware of the issue or unsure of how to help.

Malnutrition is a widespread problem within the elderly community, but it’s not just when vulnerable older people are outside the watchful eye of the state that they are susceptible to deteriorating diets. The problem still exists when the elderly are admitted to hospital and enter care homes.

Again according to the Malnutrition Task Force, when hospital patients were asked if they needed help to eat their meals, 17% said that they did not get enough help from staff and 19% only "sometimes" got enough help. Hospital staff themselves reported that 50% of people admitted to hospital from care homes were at risk of malnutrition.

The argument to prevent malnutrition is of course a moral one: what kind of society would we be if we do nothing to halt an issue that affects some of the most vulnerable people in our communities. But the argument for helping is also financial. Malnutrition costs the NHS roughly £30bn per year. Based on that, there is a clear moral and economic incentive to act.

The Malnutrition Task Force was established in 2012 to give a voice to an independent group of experts across health, social care, and local government who all aim to address avoidable and preventable malnutrition in older people.

"Hospital staff themselves reported that 50% of people admitted to hospital from care homes were at risk of malnutrition."

The group runs a number of prevention programmes aimed at sharing its expertise and works with partners in hospitals, care homes, local authorities, and private and voluntary organisations who might not know how best to help people suffering with the effects of malnutrition.

"There are a number of reasons why older people may suffer from malnutrition," says Ruthe Isden of the Malnutrition Task Force. "For some people it simply becomes harder to shop and prepare food if they become disabled or start to struggle with daily tasks – and increasingly there may not be enough help available.

For others it may be related to another disease or condition, such as dementia or dysphasia, where the condition or side effects of the medication make it harder for people to eat and drink. And we also know there is a social component, bereavement, loneliness and isolation and other life transitions, such as becoming a carer for a loved one, can also lead to people simply not eating enough."

While the reasons why older people succumb to malnutrition aren’t clear cut, there’s no debating that the problem exists and is getting worse.

The fact that public spending on key welfare initiatives like Meals on Wheels has been slashed in recent years doesn’t help (the Task Force estimates that 46,000 older people have been stripped of their ‘Meals on Wheels’ service in the past three years), but there are other more insidious problems that stop malnutrition suffers from getting the help they need.

"The Task Force estimates that 46,000 older people have been stripped of their ‘Meals on Wheels’ service in the past three years."

For instance, research by the Malnutrition Task Force revealed that just 51% of healthcare professionals thought malnutrition was a priority in their organisations, and only 47% felt confident that their knowledge and skills were sufficient to help the people most at risk.

The worrying thing is that these figures are based on the opinions of healthcare professionals. If they aren’t aware of the problem malnutrition poses, why would the general public be more informed? For genuine change to be achieved there has to be a comprehensive shift in the way malnutrition and the elderly are perceived.

"Malnutrition is a tricky issue. In general there is a lack of awareness of malnutrition and its consequences. Far too many people still think it’s normal to lose your appetite and become thin as you age," says Isden. "Malnutrition is one of the syndromes associated with frailty and we are still too accepting that becoming frail is an inevitable and irreversible part of ageing.

As a result malnutrition is still too often under-recognised and under-prioritised by health and care services. Furthermore effectively preventing, identifying, and treating it properly requires a joined-up, integrated approach that focuses on holistic wellbeing for older people, something that is still lacking for many older people in many areas."

To tackle malnutrition as a society we need to challenge prejudices associated with old age, and to do that the idea that deteriorating diets and frailty are natural consequences of the ageing process needs to be dispelled.

As well as changes in perception we also need to address the roles apathy and lack of knowledge play in exacerbating the problem. The vast majority of malnutrition cases exist in older people living in communities, not in hospitals and care homes, so it’s just as important to remember to check on friends, family and neighbours and make sure there’s a support system for older people.

"Raising awareness is key. Raising the awareness of health and care professionals so that they are looking out for the signs of malnutrition and know where to direct people for more information and support, and raising awareness of older people, families and carers about spotting the signs and knowing how to help," explains Isden.

"We must dispel the myth that this is normal as we age. The Malnutrition Task Force has a wide range of resources, advice leaflets and posters that people can access on our website or by getting in touch."

So what should you do if you know someone who you suspect could be suffering from malnutrition? "The best advice is to seek help early. The Malnutrition Task Force has published a guide for carers that helps carers understand the issue and provides practical advice and support on how they can help their loved one. You should also talk to your nurse or GP about your concerns," says Isden.