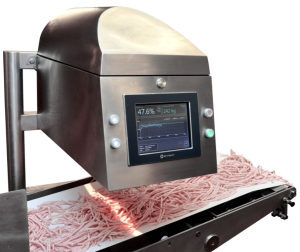 TOMRA Sorting Solutions is to demonstrate how it allows meat processors to secure the maximum benefits from in-line fat analysis and batch control at a major US industry event.

TOMRA will showcase its QVision 500 fat analyzer at the International Production and Processing Expo at the Georgia World Congress Center in Atlanta, from 28 to 30 January 2014. The system will be demonstrated in Hall B at booth 6739.

The system has proved extremely popular since its introduction, with installations taking place in countries including Germany, Poland, Austria and the US.

Tom Krueger, technical sales manager, process equipment and analytics, TOMRA Sorting Food, explained: "The QVision’s unique transflection technology sets a new standard for in-line analysis, as we’ve made great efforts to design the system to meet the food industry’s demanding needs. Durable and simply-designed, it can measure fat, moisture, protein and color simultaneously, and in real-time, with outstanding accuracy. The hygienic and robust analyzer penetrates far into the meat, measuring across the full 500mm width of its conveyor belt and offering automatic reference calibration."

QVision applications include: fresh or frozen ground meat, of any grind size – including mechanically separated products – for which the machine is immune to surface effects; diced meat, for which it can be used to blend trim meat better or as the initial step in some dried sausage production processes; and small pork trim, as it standardizes this without grinding or dicing.

Mr Krueger said: "The QVision 500 has no horizontal surfaces where water droplets can remain and the system is never in contact with the meat. The design is open, so all surfaces can be visually inspected and sanitized, using high-pressure water, without disassembly.

"Ease-of-use is another key feature, as the machine is intuitive, offering an automated and simple process interface. Key information is directly available on the self-explanatory touchscreen and operators need only minimal training to use it. The analyzer also provides impressive data access, with daily reports being exported or integrated to the customer’s existing IT system."

Among the US users of the QVision 500 are a ground beef and burger producer, which initially owned one unit and then requested another two. In addition, a major American case-ready beef producer has this year invested in four analyzers, following its acquisition of a pair in 2012.

European customers include Tönnies Lebensmittel, headquartered in Rheda-Wiedenbrück, Germany, a specialist in slaughtering, deboning and further processing, which initially received seven QVision units last year and has since taken a further three. The European arm of OSI Group, which supplies output for large restaurant chains worldwide, has also bought two machines for its state-of-the-art beef processing plant in Poland, while single orders for the QVision system have included two by sausage producers: Germany’s Eberswalder Fleisch, also a meat processor, and Greisinger Fleisch & Wurstwarenerzeugung, which uses a machine at its base in Austria.