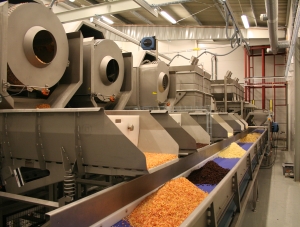 What do you do when a company from a new industry contacts you asking for a new machine? You put your thinking cap on and draw on your vast experience from other industries.

At least, that’s what Cabinplant did when Swedish muesli producer Frebaco contacted them with a very specific request.

"We had not had any dealings with the breakfast industry before, but Frebaco came to us with an exciting challenge and so of course we accepted," explains Mogens Kielsgaard, who is responsible for the Nordic market at Cabinplant.

Frebaco supplies muesli to the Swedish retail trade and the Swedes wanted to optimise the mixing process. A dosing machine needed to be developed for handling 9-10 different ingredients and at the same time the machine had to be able to transport the finished batch from the ground floor straight up to the 4th floor. Frebaco had researched the market before coming to Cabinplant, but had not been able to find a supplier who could help them.

"Mixing muesli is in principle the same as mixing vegetables and that is something we know all about. There was a challenge in that some of the ingredients, such as the raisins, stick together, and here we chose to roll them, just as the fishing industry does with prawns," says Mogens Kielsgaard, who fortunately was able to draw on many years of experience when it came to developing the solution.

Frebaco and Cabinplant collaborated closely and the Swedish company was continuously involved throughout the development process.

The machine was constructed, assembled and tested in Haarby and then sent to Sweden for installation. Today the machine is operated by just one or two members of staff, who simply enter an item number at the machine. Preset recipes then make sure that the muesli is mixed correctly. Production is automated from this point onward.

The solution has resulted in a marked change in Frebaco’s processes. Previously, the company had the ingredients mixed ‘out in the city’. Now everything is done according to the just-in-time principle at the company’s factory. And the Swedes? They now get just the right mix of muesli on their breakfast table and, as a bonus, the finished product now also looks a lot nicer, thanks to much more careful handling.