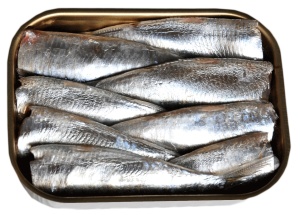 Cabinplant has gone in a whole new direction with the prize-winning Robot Trimming and Packing Line, which selects, processes and packs foodstuffs in one continuous process.

You open the can. The sardines are neatly arranged. Ready to eat. It sounds simple, but in reality an advanced technological process must be carried out for each individual set of sardines.

The production of sardines in can has traditionally consisted of three stages. The sardines are sorted according to size in one machine. The head and tail are removed and the entrails sucked out in another. Finally, the sardines are packed by hand. This process is now a thing of the past. Cabinplant’s new Robot Trimming and Packing Line has converted these three stages into one continuous process at a stroke.

Cabinplant has developed a solution that reduces the labour and time required in production, but how does it actually work?

The sardines are placed on a conveyor and then passed under a camera that photographs each individual fish. A powerful processor calculates where to cut each individual sardine and calculates the area of the piece that is to go in the can. A cutting edge and vacuum suction remove the head, tail and entrails, so that only the section for packing remains. Based on their weight, the sardines are now sorted by size and matched up so that the desired total weight of the can is achieved as precisely as possible, while at the same time the sardines are easier to pack and look nicer. The sardines are packed in can in the traditional crossways manner. All in one process.

The new line is in many ways very much in line with how Cabinplant develops new products. This too is a tailored solution, which has been developed in close cooperation with Greek producer North Aegean Sea Canneries.

Cabinplant began development three years ago in close cooperation with the customer, which also helped with co-financing. First of all came a prototype that had one camera and one robot. The prototype was meticulously tested by North Aegean Sea Canneries and was subsequently developed into two machines, each with seven robots and a camera, for the Greek customer.

It quickly became clear to Cabinplant that this was a product with enormous potential – particularly within the fishing industry. Which is why Cabinplant decided to also invest in getting the help of a professional industrial designer. This help came from Brahe Design, which, together with Cabinplant made design and functionality add up to a better unit – with great success, as in 2011 Cabinplant won ‘The Danish engineering product prize 2011’. The prize was awarded for the design and functionality.

Cabinplant has been granted with a patent for the robot trimming and packing line in the US. The patent is still pending in Europe.