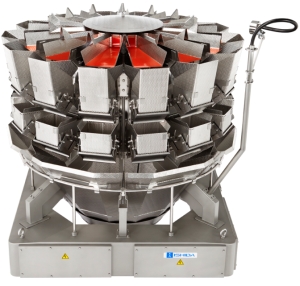 Ishida’s latest multihead weigher range, the RV Series, has received an award for innovation from one of the fruit and vegetable industry’s leading exhibitions.

The Oscar Macfrut Awards, organised by Macfrut, the international exhibition dedicated to the fruit and vegetable supply chain, celebrate process and product innovation and are judged by a panel of experts and authorities in the agri-food sector. The Awards were first introduced in 2010, recognising the need to acknowledge and promote initiatives throughout the sector in terms of technical improvements, reductions in costs and consumer satisfaction.

The Ishida RV range was rewarded for its numerous advancements to an already-established technology that enable the weighers to achieve 15% faster speeds than previous models while still delivering the highest levels of accuracy of any multihead weigher with close-to-zero giveaway.

Key features include an improved user interface with an ultra-fast touch screen that ensures quicker and easier set up, while the CCW-RV can also be operated remotely via wireless access with tablets, androids and smart phones. Enhanced security features include fingerprint verification access.

In addition, the CCW-RV maintains Ishida’s legendary durability and reliability and its robust construction enables the weigher to operate reliably even in the most difficult environments.

"We are delighted that the RV Series has received independent recognition for its innovation," comments Marcello Del Villano, Ishida’s general sales manager for southern Europe. "When we launched these new models earlier this year, we said that the best had got even better and the winning of the Macfrut Oscar demonstrates how we have once again extended the boundaries of multihead weighing."