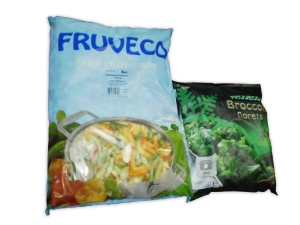 Located in an area known as ‘the vegetable garden of Europe’ in south-eastern Spain, Fruveco has built a strong reputation for the reliable, continuous supply of quality frozen vegetables. The company is Europe’s highest volume supplier of frozen broccoli and also produces frozen ready meals and snacks, which are largely vegetable-based. Over 90% of its output is packed as supermarket own-brands, while 10% is sold to smaller outlets in Germany and eastern Europe.

One of Fruveco’s major strengths is the ability to supply large volumes, often at short notice.

"If a customer suddenly needs hundreds of tonnes for a special promotion we can respond very quickly," says manager Francisco E. Ramón Juárez.

"Because of our generally large volume and the need for fast response, reliability is even more important than speed among the qualities we look for in new equipment."

Fruveco has a reputation for purchasing the most up-to-date equipment. At its highly efficient factory, vegetables are washed, blanched, quick frozen in one of the company’s five freezer tunnels at -40°C and colour-sorted before entering the packing process.

Over the last few years Fruveco has bought five Ishida 14-head weighers to keep pace with its expanding business. A standard Ishida configuration for frozen vegetables, each one is equipped with a timing hopper and its contact parts, including the three-litre hoppers, are embossed to reduce product adhesion. The weighers are filling pillow bags at target weights ranging from 300g to 2.5kg.

In the same period, Fruveco also bought a weigher of a similar specification from a competitor of Ishida and has compared the two makes on a number of parameters.

"On speed, they were roughly comparable," comments Francisco Juárez. "However, the Ishidas are consistently more accurate, with giveaway at 1% or less, compared with 2%-3% for the other brand. The Ishidas are also more consistent performers, with fewer missed cycles."

Efficiency is taken very seriously at Fruveco. The company measures line efficiency on a daily, monthly and yearly basis.

"For the five lines with Ishida multiheads, efficiency averages 87%-90%, and that includes scheduled downtime for cleaning and maintenance," Juárez said.

"For me, an important factor has been the level of service and support provided by Ishida, which has a major office in this country as well as an excellent distributor, CIMA," concludes Francisco A. Ramón Gómez, CEO of Fruveco.

"Both the company and distributor have skilled, qualified people, who can get to us quickly and who take it seriously if there is any threat to our production or our delivery time to our customers. This is not true for the other weigher supplier, where there has been a definite lack of responsiveness. I put this down to a lack of resources here in Spain but, whatever the reason, any problems that have occurred have cost us money."