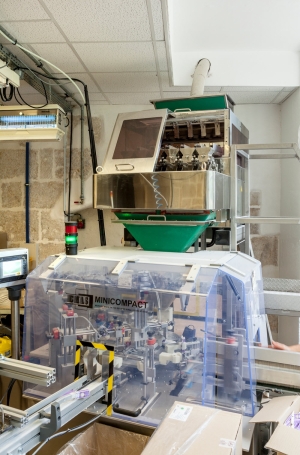 The traditional aniseed sweet, mentioned in a manuscript from 1591, but probably much older, has been made at Flavigny-sur-Ozerain in France for hundreds of years.

The Anis de Flavigny is made by gradually building up a coating of sugar, often flavoured with essential oils, around a single grain of anise. Rough processing treatment can chip outer layers, spoiling the smoothness that is part of the enjoyment of a delicacy that is meant to be sucked and never bitten into.

In order to handle the introduction of a smaller piece size, known as ‘Petits Anis’, in a new 18g pocket-sized carton, Anis de Flavigny purchased a new packing line consisting of an Ishida CCW-R-106PL linear multihead weigher mounted above a cartoning machine with a cellophane wrapping machine downstream.

The linear layout of the new weigher ensures that drop distances for the sweets are never more than 150mm. Other measures to protect the fragile product include a bancollan lining in the discharge chute.

With each pool hopper feeding two weigh hoppers, the six-head weigher has the accuracy of a 12-head machine. The compact 106 PL, which has an efficiency rating of 99%, sits on a simple but robust gantry and features a dust and draught-proof outer casing incorporating observation windows.

The 18g packs are really convenient to carry and have become so popular that Anise de Flavigny are now also marketing the full-sized sweets in the pack format.

Catherine Troubat took over the direction of Les Anis de Flavigny from her father in 1990. She has led improvements in manufacturing, marketing and distribution that have grown production to 220t per year and turnover to €3.9m, while fully maintaining the integrity and traditions of the product.

Troubat is very pleased that the new Ishida linear multihead weigher handles the original 1g sweets just as successfully as it does the Petits Anis.