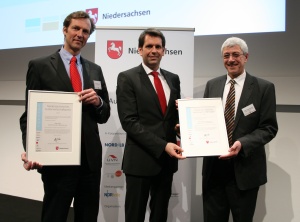 In the framework of the 10th Niedersachsen Foreign Trade Day companies have been nominated for the highly renowned and prestigious ‘Niedersachsen Foreign Trade Award 2013’. Out of 50 applicants, five small and medium-sized companies as well as three major enterprises have been chosen in advance. The award of this year’s winner took place at the international HANNOVER MESSE.

One of the nominees is Leiber – a mid-sized company with its site in Bramsche. This company has supplied the whole world with sophisticated brewer’s yeast products ‘Made in Germany’ for the business sectors of food, nutritional supplement and animal nutrition for almost 60 years. Leiber produces dried brewer’s yeast products and special yeast extracts of a high quality. Leiber has 160 employees working at two locations in Bramsche, Germany, and two further locations in Poland and Russia.

From the processing food industry’s point of view, Leiber is the expert contact for requests regarding flavour profiles and functional yeast extracts and yeast products in general. This know-how, combined with the comprehensive knowledge of customer needs, has resulted in an increasing number of international distributors, currently more than 50. Leiber has a presence globally and generates an annual turnover of round €50m. The nomination recognises Leiber’s export activities in a special manner.

At present Leiber is developing policies for its geographic business expansion; in particular in North America, the strong growing markets in South America, Asia and North- and South Africa according to the motto: "Brewer’s yeast and extract – from Bramsche – for the world".