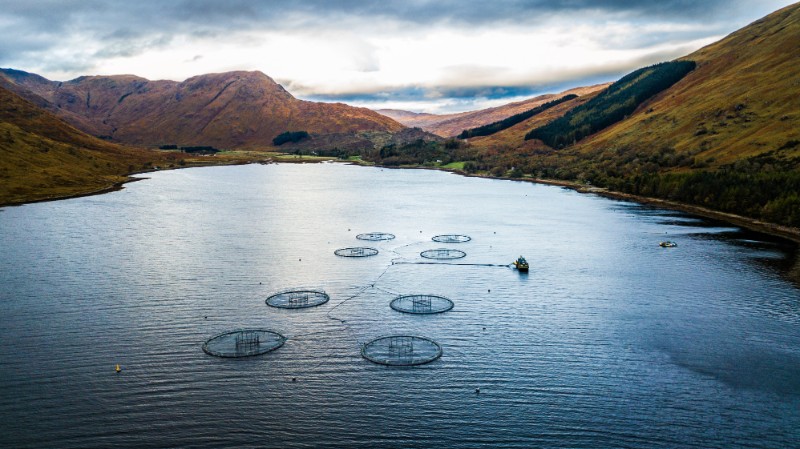 The aquaculture industry is of growing importance in Scotland. Credit: Shoesmith Drones / Shutterstock.

Mowi (formally known as Marine Harvest), has stated that it could face a 10% reduction in its worldwide headcount by 2024. The firm has more than 800 employees in Scotland, out of around 15,000 worldwide.

The Norwegian company announced in its half year update for investors that it has been heavily affected by the closure of restaurants and catering due to the Covid-19 pandemic.

Fish diseases and higher costs have also been pinpointed as causes of the gloomy outlook.

Aquaculture has become a key industry in Scotland

The aquaculture industry is of growing importance in Scotland and has become crucial, providing valuable jobs and income for the economy. Scottish farmed salmon is Scotland’s top food export and its fresh salmon is exported to over 50 countries. As a result, potential job losses will be damaging.

Mowi has faced a number of issues of late

Mowi is currently experiencing cost pressure in its farming operations from more challenging biology, stricter regulations and a general cost increase from input factors. A more challenging environment which has been exacerbated by the Covid-19 crisis.

The spot price of benchmark Norwegian salmon has fallen from nearly £8 per kilogram at the start of the year to less than half that level as of August. However, this has had less of an effect on Scottish figures, where more than half of production is sold under contract rather than on the spot market.

Despite the company’s struggles, its performance has been boosted by strong sales of pre-packed products, while retailers have also sold increasing volumes through e-commerce, home delivery and in store pick-up.

Disease, sea lice and escapes have plagued the company

According to Mowi, Scottish salmon farming is the company’s main source of concern about disease and sea lice, as infected fish can’t be sold due to the lesions the parasites cause. The cost of treatment is often expensive and many fish have had to be slaughtered.

On August 25 2020, the company also announced that nearly 50,000 salmon escaped at its North Carradale farm in Scotland, due to suffering damage to four of its ten fish pens during Storm Ellen.

The incident was caused by the breakage of mooring ropes attached to the farm’s seabed anchors, around 30,000 of the farmed salmon also died as a result of the incident.

It is difficult to assess what the financial implications of this will be but the company was recently hit with $6.7m fine for the escape of more than 690,000 Atlantic salmon from one of its farms in Chile in 2018.

2020 will undoubtedly be a tough year for Mowi and the Scottish aquaculture industry alike.