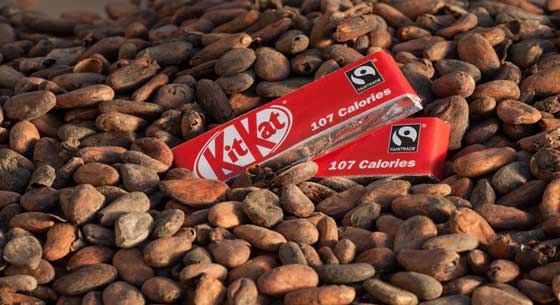 Nestlé UK & Ireland has gained Fairtrade certification for its two-finger Kit Kat, as a result of which the company will now buy an additional 5,300t of sustainable cocoa from Fairtrade farmer co-operatives in the Ivory Coast.

With the certification, an additional 800 million Kit Kat bars a year will bear the Fairtrade mark from January 2013.

Nestlé noted that it will now purchase sustainable cocoa from nine additional farmer co-operatives in the Ivory Coast, which represent about 4,500 farmers.

Apart from receiving a price to cover the costs of sustainable production, the farmers will also be offered additional Fairtrade premium to invest in business development projects or community building activities of their choice.

"Farmers in the Nestlé Cocoa Plan receive benefits such as new plantlets, farmer training and new schools for their communities."

These nine new co-operatives will become a part of Nestlé Cocoa Plan, an initiative launched in 2009 by Nestlé which seeks to invest £65m over ten years in plant science and sustainability initiatives to help small-scale cocoa farmers globally.

"Farmers in the Nestlé Cocoa Plan receive benefits such as new plantlets, farmer training and new schools for their communities," Sullivan added.

Fairtrade Foundation interim executive director Mike Gidney said that with the two-finger Kit Kat receiving certification, Fairtrade will be able to work with Nestlé to offer further benefits to cocoa farming communities in the Ivory Coast.

To date, the Nestlé Cocoa Plan has been introduced in the Ivory Coast, Ecuador, Indonesia, Ghana and Venezuela, and the company plans to extend it to other Latin American countries in the future.

Nestlé also plans to distribute 1 million high yielding and disease-resistant cocoa plants in 2012, and 12 million by 2020, in order to help farmers increase productivity.

Fairtrade International is an organisation that seeks to help producers in developing countries to make better trading conditions and promote sustainability, and it coordinates Fairtrade labelling at an international level.

Image: With the certification of the two-finger Kit Kat, an additional 800 million Nestlé Kit Kat bars a year will carry the Fairtrade mark from January 2013. Photo courtesy of Nestlé.