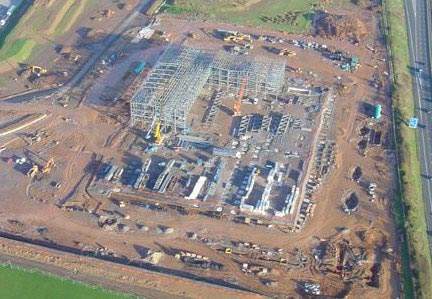 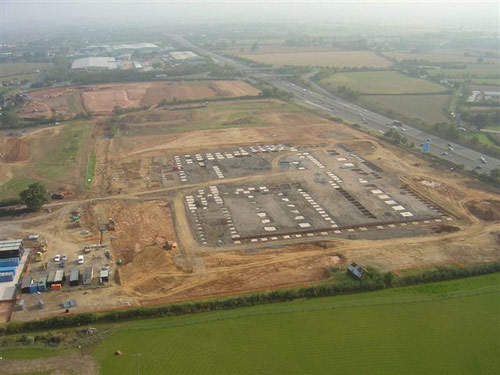 The site prior to the start of construction in September 2006. 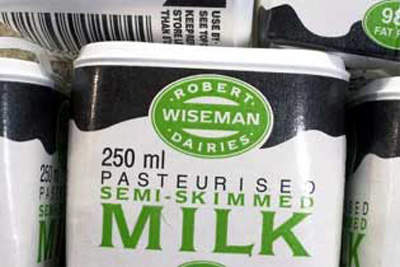 Wiseman standard semi-skimmed milk in its HDPE container, which is made on-site in Bridgwater. 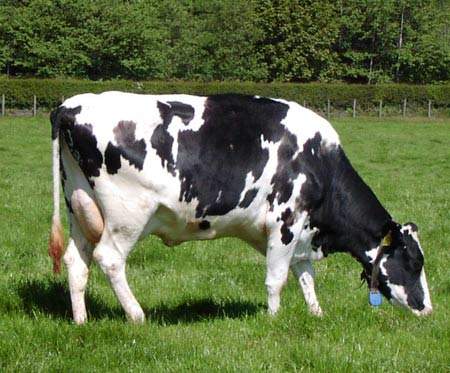 The milk for the facility is provided by the Milk Link farm contract assets in the area.

The UK’s Robert Wiseman Dairies opened a 325,000m² dairy in Bridgwater, Somerset, for the production of both organic and conventionally produced milk on 4 September 2008. The plant was opened by the Defra Minister Lord Rooker.

The company suffered setbacks in 2005 due to the loss of two major contracts, but bounced back with the £80m dairy in the south-west of England, which consolidated the Wiseman operation in the area and led to an overall increase in efficiency. The dairy is located in one of the largest milk producing areas in the UK, which keeps transportation costs to a minimum.

The company took over the local Milk Link liquid milk business in early 2006 as a prelude to its intended expansion.

The dairy has a throughput of eight million litres of milk a week and employs about 350 people.

The company may transfer 70 employees from its Okehampton plant, which is planned to close due to high operating costs. This closure decision was announced in January 2011.

“The dairy has a throughput of eight million litres of milk a week.”

The dairy and distribution centre is situated in the Regional Rural Business Centre in Bridgwater (RRBC). This new hub is intended to be the premier south-western agricultural business centre and will contain a range of integrated businesses. In addition to the Wiseman dairy, the centre will also contain a new livestock market. The design consultants for the RRBC were Hammonds Yates.

The dairy is capable of processing 500 million litres of milk a year. It distributes milk to Wales, the south-west of England and the Midlands.

The costs for the new dairy increased due to an increase in the design capacity from 300 million litres to 500 million litres. This saw costs leap from £46m to £80m. The plant was constructed by A and H Construction and quantity surveying was handled by Dickson Associates.

The diary is integrated with full packaging facilities including a plastic carton blow moulding plant situated on the site.

Isoma supplied half-sized trolley packers and a complete conveyer system for the Bridgwater site. The trolley packer was tested at other sites and, after real-time modelling of the filling lines, simulation proved the benefits of the new trolley packer.

Robert Wiseman Dairies suffered a major setback in 2005 following the loss of major contracts with supermarket chains Morrison and ASDA. Profits fell by 15% to around £25m after a year of contract battling with rival milk
producers ARLA and Dairy Crest.

The company was able to weather the storm and in 2006 higher selling prices and value-added milk helped it rebuild operating profit margins.

“The company supplies over 60% of Tesco’s organic milk.”

Operating profits rose by around 30% and turnover rose 6.5% to £568m. This was helped by new milk supply contracts with Tesco, Iceland and Sainsbury’s. The company supplies over 60% of Tesco’s organic milk and has concentrated on new value-added milk products such as ‘The
One’ milk (a 1% fat product) to rebuild profit margins.

The company has also launched flavoured organic milks, flavoured milk and a fortified milk with omega 3 and vitamins A, C and D. From November 2006 Wiseman also picked up a contract to pack milk for Rachel’s Organic (Horizon Dairy).

The company picked up extra contracts in 2007 including the One Stop convenience store chain and the Co-op group, which recently bought rival Somerfield, representing a further 100 million litres per year for Wiseman. In conjunction with deals to supply Co-op stores in Scotland and the south-west of England, Wiseman’s contract with the supermarket chain is in the region of 220 million litres per year (13% of Wisemans total annual output).

The dairy produces and packages a good deal of the organic milk in the UK. With the enhanced health benefits of the consumption of organic milk confirmed by nutrition experts the demand by consumers has increased exponentially.

In January 2010, Robert Wiseman Dairies completed the installation of a new reverse osmosis (RO) plant at the Bridgwater facility. The RO plant treats water from the on-site water effluent treatment plant. The treated water can be reused for food grade cleaning purposes.

The RO plant is expected to save 200,000 litres of water a day. Construction of the plant is part of the company’s wide goal to reduce water usage by 25% across all of its dairies by 2015.