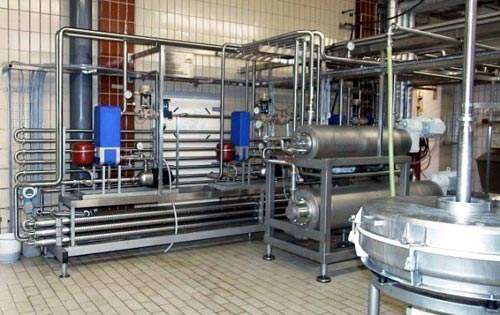 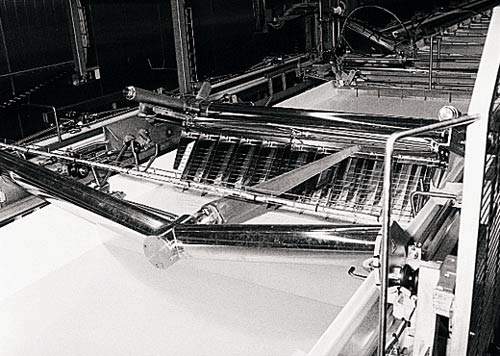 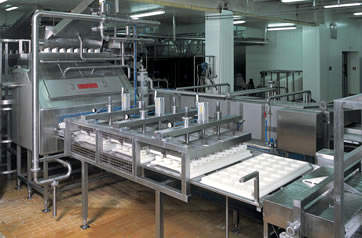 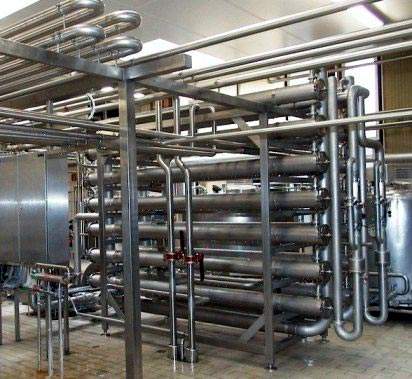 The new production line has the capacity to process in excess of one million litres of milk per day. 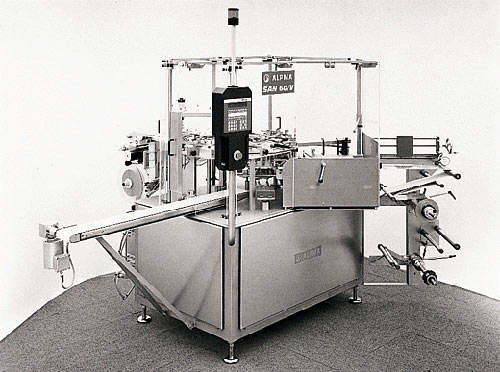 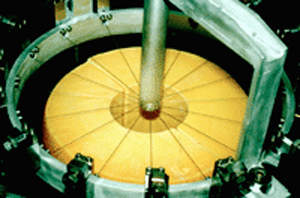 A truckle of cheese being sliced. 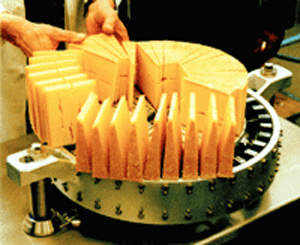 Cheese wedges being inspected for quality before packaging

Wimm-Bill-Dann (WBD) Foods announced in October 2003 the launch of a new hard cheese, which is to be produced at a state-of-the-art production facility situated in the Rubtsovsk dairy plant. The Rubtsovsky Dairy Factory (RMZ) is located in the city of Rubtsovsk in Altai region and was acquired by WBD in 2001. The dairy which first opened in 1964 had already undergone two refurbishments in the 1970s and 1990s but 2003 saw a major advance in technology at the plant.

In 2003 the company invested $13m in a refurbishment project to cover the construction of a new processing / production building, warehousing facilities and production lines. The new plant was built to meet the demands of an increasing Russian market for cheese and cheese products.

A project to implement a new enterprise resource planning (ERP) information system was launched by WBD in February 2008. The ERP system was installed in late 2009. The installation is considered the largest in the Russian food industry.

The average Russian consumes 3.9kg of cheese per year compared to their western European counterparts where consumption is around 16kg per year. The market is still growing and as Russia actually imports 60% of the cheese consumed in the country there is a lot of scope for a domestic producer to capture market share.

“By 2005 cheese (including the new Lamber brand) accounted for 5% of company sales.”

The company launched an extensive advertising campaign on Russian national television to increase the popularity of cheese and promote its new Lamber brand in 2003–2004. The Lamber hard cheese is available in two varieties: regular, with 50% fat, and ‘Lamber Creamy’, with 55% fat. By 2005, cheese accounted for 5% of company sales. In April-May 2005 Lamber’s production doubled at the plant following the launch of a new production line.

The detailed process engineering and installation was carried out by a subsidiary company of Alpma, LTH Dresden. The new production line has the capacity to process in excess of one million litres of milk per day and is fully automated so that production runs can carry on non-stop, 24 hours a day.

The cheese production facility consists of three separate areas. First is the milk processing area where the raw milk is received, stored and undergoes pasteurisation. The next area is where the milk is coagulated by the addition of rennet to produce curd. The ‘coagulator’ (Alpma Coagulator2000) produces a continuous supply of curd. Moulds are then filled using a precise positioning system. They are stacked and drained in a climate-controlled environment until the required dry matter content level is reached. The immature cheeses are then passed onto a storage and ripening area.

There is a fully automatic system for the removal of immature cheeses from the moulds, as well as automatic handling in the ripening rooms where wet and dry salting of the cheeses is also automated to aid the maturation process. The Alpma MSW stack turner is used and this can turn up to 900 cheeses in each stack as they mature.

Wimm Bill Bann describes the process: “After passage through a climate-controlled tunnel, the heads of cheese are automatically extracted from block form and fall into a directed flow of brine. The heads of cheese float in a river of salt and flow into containers. The containers are automatically transferred into salt basins where the salting of the cheese occurs. (Throughout the process there is no physical contact between workers and the product and this ensures microbiologically ‘clean’ cheese).

“The salting process takes nine hours or longer, after which the cheese is again ‘washed’ by a flow of salt water out of the containers. Before packaging the heads of cheese fall into a small basin with clean water, where excess salt is washed off the cheese, then they are dried in special tunnels.”

The matured cheese is then cut and packaged. The presentation of the cheese is very important. The new Lamber brand has been aimed at the upper-middle segment of the market and, as a premium brand, is presented in fold wrapped packages as a round similar to Edam or additionally as a wedge shape.

The cutting equipment used for cheese portion preparation is a CUT line; this can accommodate types of cheese from hard to soft/creamy consistency. First the product is weighed and meticulously measured.

It is then cut into equal weight portions, ensuring that every cut is exactly calculated and reducing wastage to a minimum. The machine has swivel-mounted wedge cutting blades making it possible to cut even cheese bars into wedges.

Since some cheeses can have a sticky consistency the blades also make use of an ultrasound system to ensure clean cuts and a minimum of down-time for blade maintenance. The cheese is packed in a wrapped pack using an SAN 80/T- packaging line.

Wimm-Bill-Dann Foods manages 30 production facilities and 26 trade affiliates across Russia and the Commonwealth of Independent States. The company controls a 30% share of the dairy product market and a 30% share of the fruit juice market in Russia. The company is closely following the development of the consumer cheese market in Russia before expanding the current plant’s capacity and/or possibly investing in a second cheese production facility in Russia.

The company changed its corporate structure in March 2008, combining its existing dairy and baby food units along with a holding company into a single structure: Wimm-Bill-Dann Foods.

In doing this the company halved its number of legal entities from 68 to 34. In addition, functions such as account management, legal and information technology have been centralised. WBD beverages was aligned with WBD Foods.

The company said it will be looking to accelerate activities in Ukraine, Central Asia, Caucasus region and exports to the rest of the world.

WBD was globally ranked 37th by Forbes magazine and the Reputation Institution in a survey of the world’s most respected companies.