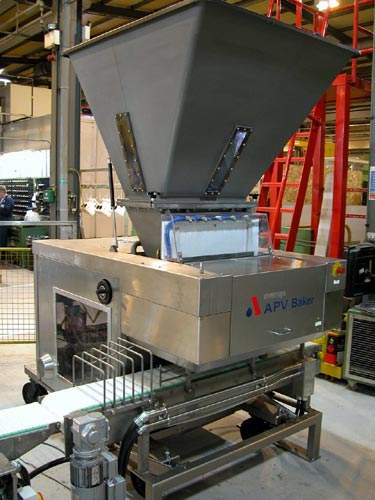 This APV Baker Accurist can divide bread batches into 900g units with a standard deviation of only ±2.5g. 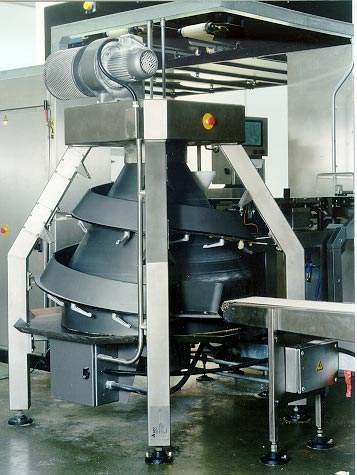 Warburtons, the UK’s largest family-owned bakery, opened a new bakery in Enfield, London, in June 2003. The baker supplies 100 supermarkets and grocers to the north of the M25, London’s main ring road. Baking 100t of bread a day, or 400,000 loaves weekly, the 110,000ft² factory has created 300 jobs. The bakery produces 8,000 loaves each of traditionally packaged white and wholemeal bread and 8,500 wax-wrapped white loaves an hour.

Warburtons has built its brand upon a principle of only supplying retailers directly from the bakery, rather than using separate warehouses. Starting from its original home in Lancashire, the baker managed to cover two-thirds of consumers nationwide and account for 70% of the branded small white loaves sold in the UK. However, its lack of production facilities in the south of England and its insistence on supplying the freshest produce prevented it entering the valuable London and Home Counties market. The new £30 million production facility in Enfield is now, in the words of chairman Jonathon Warburton, the baker’s “foothold in the south of England”.

Construction began at the site in August 2002 and bread was being baked for sale in June 2003. The cost of the project was split roughly in half between the cost of land and construction and the cost of equipment.

Warburtons designed and manufactured their own four-piece moulders for wax-wrapped bread. In addition to this, they purchased a range of equipment from a number of different suppliers.

Warburtons uses equipment supplied by APV Bakers to handle the initial mixing, dividing and proving of dough at Enfield. Flour is poured from storage tanks into a hopper and an accurate measure of its weight and temperature taken. This information is then used to ensure that water is added at the correct weight and temperature to give 380kg batches ready for mixing.

Dough batches are then passed to an APV Bakers Tweedy Mixer, which uses a pressure vacuum process to mix the dough. In the first phase of mixing, high pressure is used to force air into the dough and to increase its energy, in line with the Chorleywood process. The second phase of mixing takes place in a vacuum chamber. Air bubbles in the dough expand as the pressure drops. The combination of pressure and vacuum mixing encourages the formation of long protein chains, giving improved texture, lift and dough colour compared to vacuum-only mixing.

The dough passes from the mixer to an APV Bakers Accurist Divider. This volumetric divider can split mixed dough into 900g batches with a standard deviation of only ±2.5g, making a significant impact on give-away costs. The Accurist divider will keep to this low tolerance level for over 10,000 hours when properly maintained.

The divided dough passes via a conical moulder to a Lock Inspection Systems checkweigher. During the processing of each batch, the density of the dough mix gradually changes as the dough rises and is variably compressed in the divider hopper. The checkweigher feeds back to the divider, which is automatically adjusted to ensure that dough batches are sorted into consistent units.

Spooner Vicars provided a final prover, tunnel oven and cooler. The oven is 31m long and 4m wide. Produce is transferred around the plant using Ferguson conveyors and checked for contaminants with a Cintex metal detector. The Cintex detector uses a fully encapsulated detection head, combined with a bifurcated screen to minimise product effects, ensuring reliability, sensitivity and stability. A key feature of Cintex metal detectors is their ability to automatically adjust sensitivity levels in line with production variations and to automatically re-calibrate for new products. The detectors are MIACS (Management Information Control System) networkable, facilitating remote operation, and comprehensive validation and production reporting.

An automated system from Autarky handles used and cleaned baskets on their journey around the plant. Spiromatic installed a silo for bulk handling. Newsmith provided pan cooling, handling and tray washing equipment.