The Tasty Baking facility will now be more efficient and more environmentally friendly. 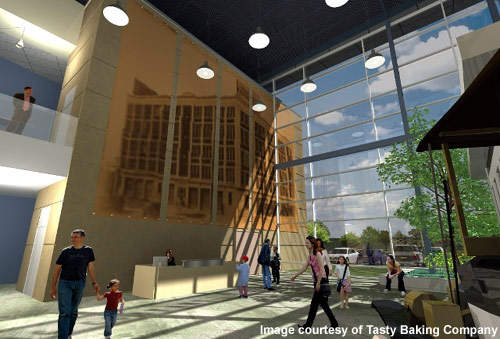 The bakery will also run tours and this is the new lobby. 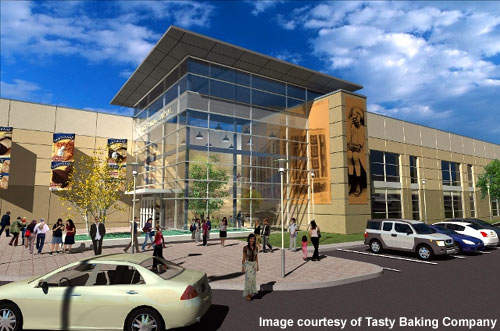 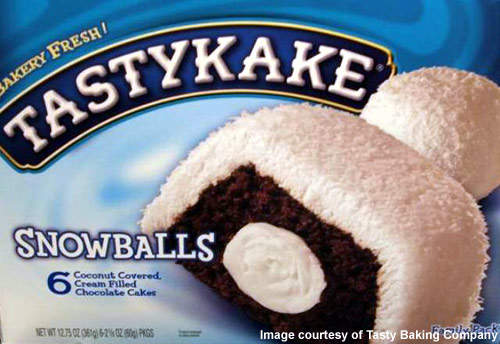 Snowballs are a great favourite and one of over 200 SKUs. 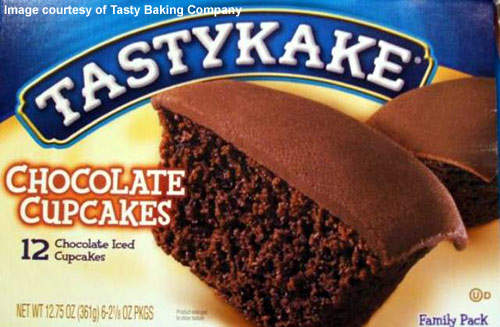 One of the most popular product lines from the Tasty Baking Company.

The Tasty Baking Company is a US icon having produced TastyKake snack cakes for the last 86 years in their six-storey Philadelphia facility on Hunting Park Avenue. The products are best known along the Eastern seaboard and westward to Cleveland.

There were three cupcake lines, two doughnut lines, a cookie line, two KandyKake lines, one Kreamie line, two pie lines, three Krimpet lines and a junior line. The factory used state-of-the-art equipment but had a dated and inefficient layout and required major modernisation to give a new more efficient and green facility.

The company in its present form had no new product flexibility although it held 200 different stock keeping units. There were dedicated ovens for dedicated products, and it only focused on what it could sell most profitably instead of what the consumer required.

The company’s net sales in 2009 were over $136.7m but the management realised that for future success they needed a new production facility. One of the first actions of the management after a strategic review of the company in May 2006 was the implementation of an enterprise resource programme (ERP) from SAP for the current facility.

On 20 April 2009, the company announced its decision to relocate its Philadelphia operations to The Navy Yard, a local commercial and industrial development centre. The new facility was opened in May 2010. It includes manufacturing, distribution and warehousing space.

The project, however, caused a cash crunch for Tasty Baking. The company missed an $81.5m debt payment deadline on 1 January 2011, forcing it to evaluate several financial and strategic alternatives including a possible sale or merger. Tasty Baking entered into discussions with the lenders, led by Citizens Bank, to defer payment until 14 January 2011.

On 14 January 2011, the company received debt financing worth $6.5m. Philadelphia Industrial Development Corporation (PIDC) provided $2m, the Department of Community and Economic Development provided $1m and a group of investors provided another $3.5m. The lenders also agreed to extend the payment deadline until June 2011.

In April 2011, Tasty Baking announced a merger agreement with Flowers Foods. The all-cash merger was completed in May 2011 for a total purchase price of about $175m.

As part of the relocation, a new Tasty Baking Company facility was constructed on a 25-acre site at The Navy Yard, Philadelphia by Liberty Property / Synterra under a 26-year lease agreement (announced in May 2007). Construction work on the 345,000ft² single-storey facility began on 1 April 2008. The facility was opened in May 2010. It includes manufacturing, distribution and warehousing space.

The project involved a totally new start with new bakery equipment, packaging equipment and also a logistics and distribution centre. There are seven production lines instead of the previous 15 and production schedules are more streamlined and quicker. There is more scope for product development.

The lease approach for the building was taken because it was difficult to finance the building and equip it at the same time. The same site also accommodates a 35,000ft² company headquarters (part of a 95,000ft² complex constructed by Synterra) which opened on 20 April 2009. The building is located at Three Crescent Drive, within the Philadelphia Navy Yard.

The bakery has a mezzanine floor for public tours to see actual production in process. Fluor assisted with the engineering and installation logistics of the new bakery project.

“The new Tasty Baking Co facility was constructed on a 25-acre site at The Navy Yard, Philadelphia.”

Tasty Baking approached its design with sustainability and environmental awareness in mind. The building was built under LEED (Leadership in Energy and Environmental Design) principles, platinum LEED for the office building and base level LEED certification for the bakery. Five of the cake lines have thermal oil heating, which is reusable.

The bakery and HQ have efficient HVAC, water conservation, use recycled building materials, and implement day-light harvesting, among many possible environmentally efficient features.

The project used a combination of state and city funding as well as low interest loans. The capital investment for the baking equipment and other areas of the project was around $75m. The project was funded through the combination of multi-bank loans led by the Citizens Bank, as well as $32m in low-interest development loans provided in part by the Commonwealth of Pennsylvania and the PIDC. In addition, Tasty Baking Company was awarded a $600,000 Opportunity Grant by the Commonwealth of Pennsylvania.

The facility is located in a Keystone Opportunity Investment Zone, which provides tax abatement through to the year 2018.