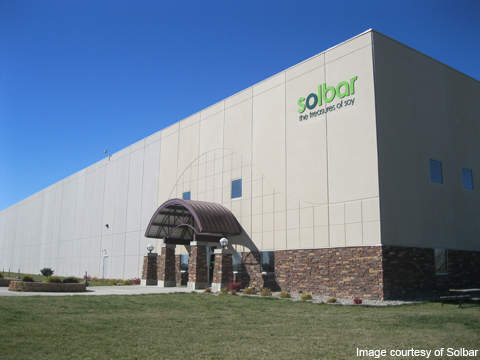 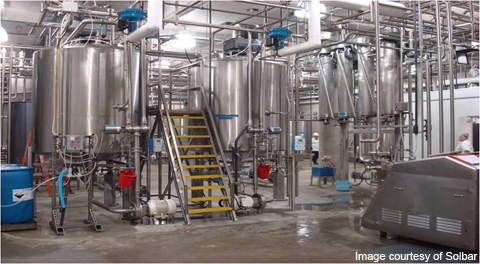 The process controlled stainless-steel vessels network at the plant. 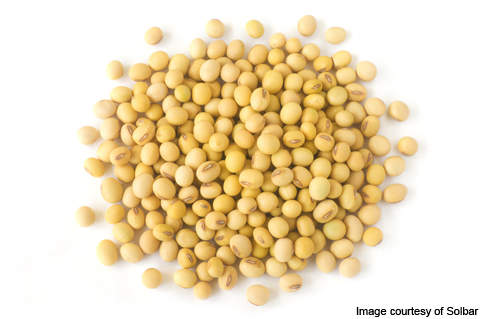 The South Sioux factory produces soy protein isolates, a dry powder separated from soya bean flour. It has high protein content with a biological value of 74.

The soy protein isolate is used as an ingredient in the preparation of foods and beverages such as vegetarian dishes, nutritional bars and sports drinks.

Solbar already operates two speciality soy proteins manufacturing plants in Israel and one in China. The plant enables Solbar to meet the increasing demand for soy protein isolate product. The US market accounts for 15% of the company’s total protein sales.

In November 2011, CHS signed an agreement to acquire Solbar for $133m. The acquisition is expected to be completed by the first quarter of 2012, subject to regulations and the approval of shareholders.

History of the soy processing facility

The former Green Planet Farms soy processing plant was opened in July 2008 and production started in December. The plant was closed in early 2010 due to the economic downturn and lack of capital to continue the operations. The facility was built at a cost of about $40m.

The company had received loans and funding from the US Department of Agriculture (USDA) Rural Development and First American Bank-Sioux City for building the structure and procuring equipment and raw materials for the plant. It also received $400,000 from community development block grant, benefits from the Nebraska Advantage programme and tax credits.

The acquisition of this processing facility by Solbar included the land’s leasing agreement, the technology and the patents owned by Green Planet Farms.

Size and area of Solbar’s plant

The facilities at the building include an 18,000ft² food processing area over two floors, a 42,000ft², 130ft tall dryer tower, a 6,000ft² boiler room (with steam boilers and gas-fired hot water boilers), laboratories for research and development, 102,000ft² of storage and distribution warehouses and 12,000ft² of office space. It is a highly automated facility with the latest equipment, technologies and new assembly lines.

The plant incorporates energy efficient roofing and computer-controlled lighting systems to save energy. Recycled steel and concrete were used as construction materials. The office is furnished with environmentally friendly furniture.

Technology used at the site

In 2009 Rockwell Automation and ESE were contracted for processing automation at the plant.

The facility uses a Rockwell Automation PlantPAx process automation system and HMI software in the processing of the soy protein isolate.

The automation system is integrated with wireless technologies from ProSoft Technology and process instrumentation from Endress+Hauser.

The automated wireless process control systems allow the engineers to monitor all the processing operations through hand-held computers and make prompt changes when necessary.

The output wastes from the plant are checked by a process energy recovery system. This allows reuse of the by-products and reduction of carbon foot-print.

Soybeans are bought from local sources under contracts and crushed into soybean flour. The processing plant extracts the soy protein isolate from the flour.

Earlier, the plant used the proprietary technology of Green Planet Farms for separation of soybean oils and proteins from flour using warm water at low pressures. The eco-friendly process, called G2O, was free from use of the traditional solvent, hexane.

The Solbar plant utilises a formula developed in Israel for protein isolates production. The company, however, plans to include a chemical-free process.

The plant has been built with a capacity to process 68,000-acres of soybean production a year. It is designed to produce one pound of isolate product from 3lb of farmed soybeans.

Solbar planned to invest another $10m in new equipment and machinery. The company also had plans to increase the workforce at the site to 100 in 2011, based on product demand in the US. The availability of land also allows for future expansion of the plant.

The plant occupies 195,000ft² on a 40-acre Greenfield site in Roth Industrial Park of South Sioux City, Nebraska. The city has infrastructure to support the soy facility and is close to the largest soybean producing areas.

Proximity to interstates 29 and 90 and railway lines help in product distribution.