A range of specialist cakes, puddings, quiches and salads
Expand

The opening day of the new bakery premises with the now-famous cherry macaroons. 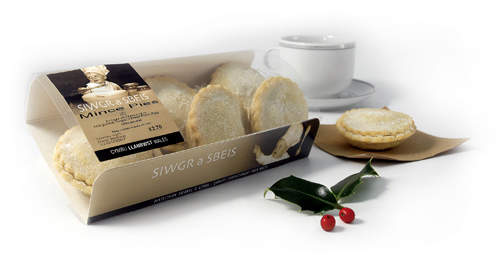 Sigwr a Sbeis mince pies are just one of the products following traditional recipes and methods. 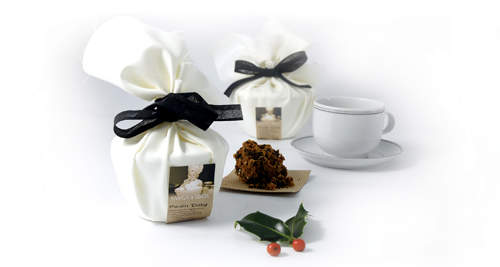 Sigwr a Sbeis is busy developing a range of Christmas products, including Christmas puddings.

The Siwgr a Sbeis Bakery in Llanrwst, Wales, relocated its business to larger premises for the third time in 2006. Starting life in a shop in Watling Street, Llanrwst, in 1989, Siwgr a Sbeis (‘sugar and spice’) expanded into further premises in Groesffordd, which was converted to meet the company’s specific needs in 1991. The business outgrew these premises in 2006 when work started on the new build bakery.

The bakery has been a resounding success since it was started by two school friends, Rhian Williams and Rhian Owen, over 18 years ago. It has become well known in the North Wales region, supplying an extensive range of cakes (Victoria sponge, coffee cake, carrot cake and so on), muffins, scones, mince pies, flapjacks, fruit cake and Christmas pudding as well as savoury quiches and salads.

“The bakery has been a resounding success since it was started by two school friends over 18 years ago.”

The bakery already makes a speciality called Quiche Eryri, the principal ingredient of which is Snowdonia Cheese and Toffoc Crunch (vodka liqueur). The recipe uses the Welsh vodka liqueur with a crumb base to create a cheesecake-style dessert.

The bakery supplies products to the hotel restaurant/coffee shop trade as well as the public via smaller grocery shops and convenience stores across North and mid-Wales and has a well established brand identity.

The brand concept, logo and packaging were developed by Francis Balsom Associates, a brand consultant based in Cardiff. In July 2007 the bakery won the Great Taste Gold Award from the Guild of Fine Food for its blackcurrant flapjack.

In December 2010, the bakery won its first award at the 2010-11 True Taste Awards. The company was awarded a silver True Taste award for its coffee and walnut sponge.

The new 4,800m² bakery created new jobs in the area and is equipped to allow the business to expand in the future. The bakery employs 20 personnel.

“The 4,800m² bakery created new jobs in the area and is equipped to allow the business to expand in the future.”

The larger premises were opened and operations began in August 2006. The new state-of-the-art bakery was built to a custom design by the two ladies running the business. The finance for the facility was not announced, but a Welsh Assembly grant was obtained to help in the relocation.

Because of their success in establishing a small business in rural Wales, the Siwgr a Sbeis business partners were crowned Welsh Livewire champions in 1989 and have been mentors/role models for the Welsh Assembly Government’s Dynamo scheme.

They pass on their entrepreneurial experience to budding business entrepreneurs in schools across North Wales.

Dynamo is a programme that is managed by the Welsh Assembly Government’s Department of Enterprise, Innovation and Networks and is part financed by the European Union.

The construction of the bakery building was carried out in a 20-week period starting in March 2006. The architect and engineer for the £420,000 construction project was David McLean Design. The project manager was CFC Astor Harrison and the mechanical and electrical engineer was HE Simm and Son.