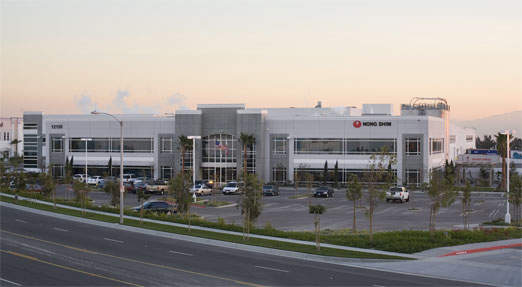 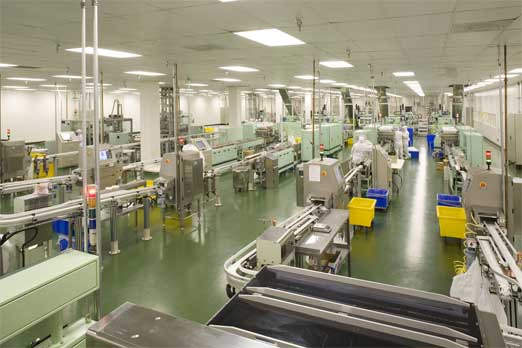 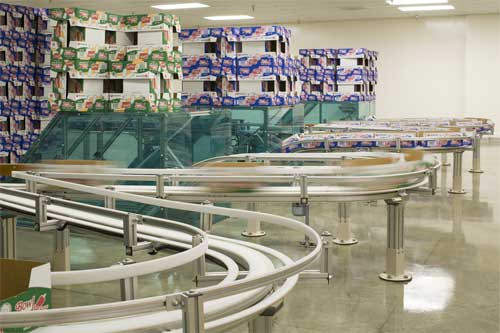 Part of the packaging line for the aluminised packeted noodles. 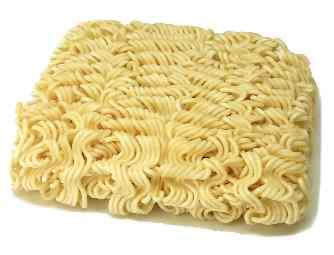 Ramen instant noodles are a Japanese invention, and are inexpensive and easily reconstituted. 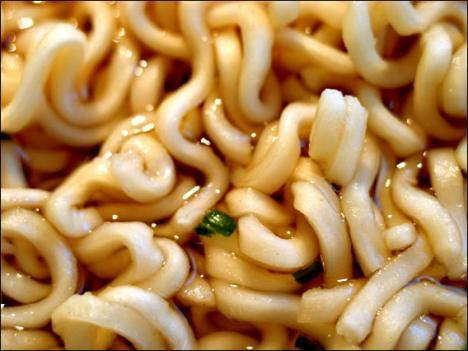 Nong Shim Foods is also entering the Mexican market and will invest up to &#36;40m over the next five years. 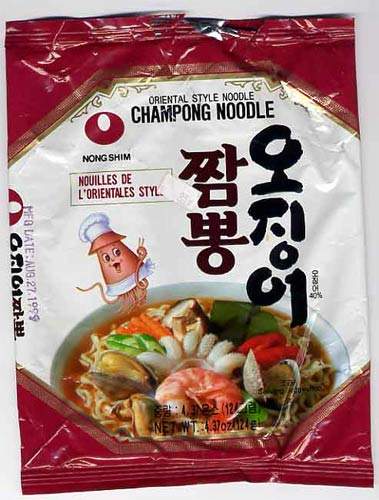 Nong Shim holds 31% of the savoury snack market in Korea and 72% of the instant noodle market.

Nong Shim Foods is the Rancho Cucamonga, California division of Nong Shim Co Ltd, a $1.6bn food manufacturer based in Seoul, South Korea. The company holds 31% of the savoury snack market in Korea and 72% of the instant noodle market (its main
business).

The US is the largest consumer of Ramen (instant noodles) outside Asia and Nong Shim wanted to capitalise on its expertise and success in the Korean market by making an impact in the US. To do this the company instigated the construction of a noodle
production plant in California on a 13 acre Greenfield site.

The site contains the Nong Shim corporate headquarters, manufacturing and distribution facility. With the Rancho Cucamonga project, Nong Shim invested an estimated $75m in the construction and outfitting of the 268,000ft² plant, in the belief that American food culture will respond to value-added ingredients in a commodity category.

Although products are priced under $1, they come at a premium compared to some competitor noodle brands. By investing in advanced processes and scrupulous hygienic practices, the company is betting that the future lies in fresh noodles and high-quality flavourful ingredients.

Nong Shim Foods is also entering the Mexican market and will invest up to $40m over the next five years, hoping to capture 25% of the market. A new production plant in Mexico may also be on the cards.

“Nong Shim wanted to capitalise on its expertise and success in the Korean market by making an impact in the US.”

Instant noodles are a Japanese invention. Much of post-war US aid arrived in the form of wheat, an unfamiliar foodstuff in Asian culture. Nissin Food’s Momofuku Ando invented the oil-infusion process that created chicken ramen from wheat flour in 1958
and, with the help of modified starch, instant cup noodles years later. The noodles were shelf-stable, easily reconstituted and provided an inexpensive source of nutrition – virtues that made them a hit throughout Asia.

The plant was constructed under a design and build basis and the construction and process contract was awarded to McClear (now part of Austin AECOM) with expertise in pasta plants. The building is a concrete tilt-up structure and houses the noodle and
soup processes. The company, because of its technical expertise, also sent its own engineers to play an active role in the setup of the plant.

Ground was broken on the Rancho Cucamonga project in May 2004 and construction was completed in late 2005, with the plant coming into operation in early 2006. In 2006 the main construction contractor Austin AECOM was awarded the 2006 Project Achievement Award for the noodle plant from the Construction Management Association of America (CMAA) in Southern California.

Most of the processing and packaging equipment in the plant was designed by the company’s in-house engineering firm. However in California, those units had to be integrated with a flour-handling system engineered by Shick USA, shrink-wrap machines
from Douglas and X-ray units from Smiths Heimann.

The plant is highly automated. Siemens devices in the central control room oversee the operation of the noodle lines, but peripheral equipment is controlled by Rockwell, Omron and Mitsubishi control systems. Line workers perform more of a quality assurance and sanitation role than operational role on the automated production lines. The central control room was designed so that it could easily accommodate future expansion of the plant.

Filtered and temperature-controlled water is mixed with vitamins, salt and other flavourings in a stainless steel tank to create a broth that is delivered via an 800-joint plumbing system, creating flavoured dough in the mixing room. Each noodle line
consists of a mixer dropping vertically through a mezzanine into the dough kneader. Dough feeds into the kneader, and through a series of compound rollers and continuous rollers to achieve the desired noodle thickness.

After stretching, strands of noodles with about 43% moisture are conveyed through a steam tunnel, where they are cooked before entering a steam-fired palm-oil fryer. Steam power is used instead of gas for more precise temperature control. The oil
drives off moisture in the noodles, effectively drying them. The noodles are then cooled on a special conveyor.

Though some oil pick-up occurs, the addition of antioxidants and adjustments to the oil recipe have enabled the company to gradually push product sell by dates to eight months. Two of the plant’s four noodle lines generate large and small bowl
noodles, which are thinner and have a different texture than the noodles in aluminised film envelopes.

The soup production facility has three storeys and houses a complicated process including blending, evaporating, vacuum drying, crushing and reblending. The fine soup powder is packaged in small aluminised foil pouches on the second floor and then transferred to be packaged with the noodles on the first floor to provide the flavouring.

“The addition of antioxidants and adjustments to the oil recipe have enabled the company to gradually push product sell by dates to eight months.”

Soup base is produced using a continuous vacuum drying (CVD) process. Fresh garlic, onion and ginseng are cleaned, crushed and combined with soy sauce, milk and other liquids in an evaporator for up to five hours, then transferred to a vacuum dryer
for a similar length of time. Low pressure allows the unit to remove moisture at reduced temperature, leaving more of the flavour intact. The solid mass is then ground to a fine powder in a two-step pulverising process.

Depending on the recipe, as many as 60 dry and formerly liquid ingredients are in the soup base for each product. Soup base mixes are deposited directly into bowls or packed in plastic pouches in noodle envelopes.

An array of eight proximity sensors
verify the foil packet’s presence immediately after it is deposited into the package, signalling downstream machines to divert any packages without a packet for rework.

Besides performing the fundamental function of foreign-material screening, the X-ray units also validate the presence of a foil packet with soup base in many of the products. As with the flour system at the head of the line, the X-ray units are equipped
with modems for remote diagnostics.