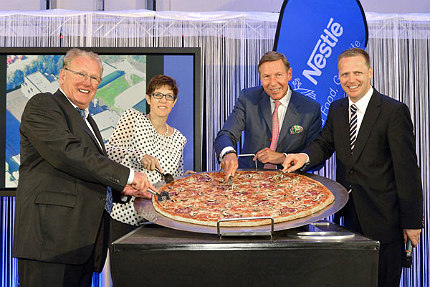 The facility opened as part of the expansion of Nestlé’s global frozen pizza business and frozen foods research and development facilities in the US.

Wagner initially established the manufacturing factory for the German frozen food sector in 1969. Nestlé acquired a 49% stake in German frozen pizza supplier Wagner in 2005, and later increased the share to 75% in 2010.

The new facility has a total floor space of 6,160m². It produces about 70 million Wagner-branded products a year. It provides additional employment to 50 people. The products produced at the facility will be marketed in Europe.

The new facility has been constructed with an investment of about €50m ($66m) and has two production lines. The existing plant produces about 280 million pizzas a year and records annual sales of about €400m ($534).

The new production lines will increase the pizza production up to 350 million a year.

The new production lines are equipped with sophisticated and advanced technology for manufacturing frozen pizzas. The facility also has the latest noise and environmental protection features.

"The new facility has been constructed with an investment of about €50m ($66m) and has two production lines."

More than 8,500m³ of concrete and 1,000t of steel was used for the construction of the facility. The outer shell of the building consists of about 3,210m² of aerated concrete wall panels.

The building is also installed with 1.2 million cable connectors and 230km of electric cables.

The plant also manufactures pizza varieties that are organic, wholegrain and lactose-free. The products are manufactured without adding any kind of flavour enhancers and artificial flavourings.

Some of the best natural raw ingredients are used in manufacturing the pizzas.

The new facility was built in compliance with the latest energy-saving and sustainability techniques. It includes an energy centre which utilises less water and energy than older production facilities.

The plant is also facilitated with a heat recovery system that absorbs the heat produced in the pizza manufacturing process and feeds the recovered energy back into the production process.

Germany had the largest share in the frozen food market in Europe in 2010, with total sales recorded of €11.4bn ($15bn), according to the Germany Trade and Investment report.

Nestlé holds about 30% of the pizza market in Germany. The sales growth for Nestlé accounted for more than 400% of the German pizza market since the acquisition of the Wagner brand in 2005.