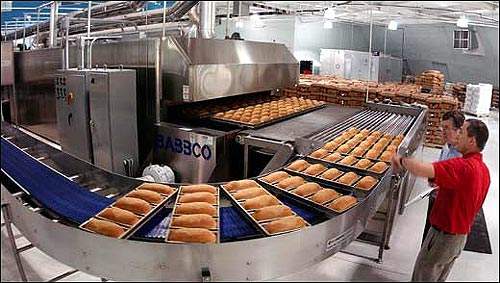 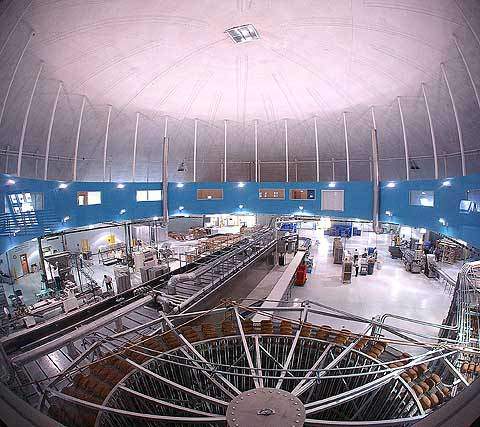 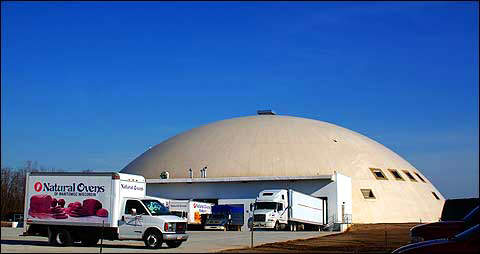 The new bakery was opened in 2003. (image vitophoto.com) 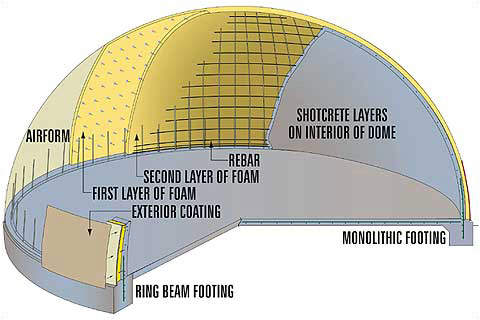 Diagram of the dome's structure, showing layers used in construction. 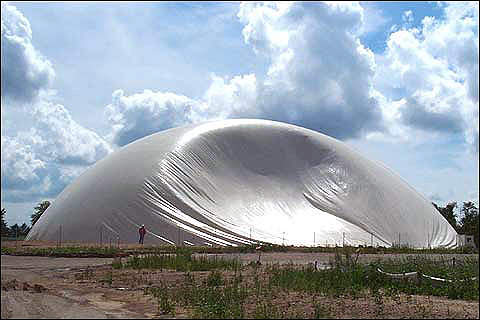 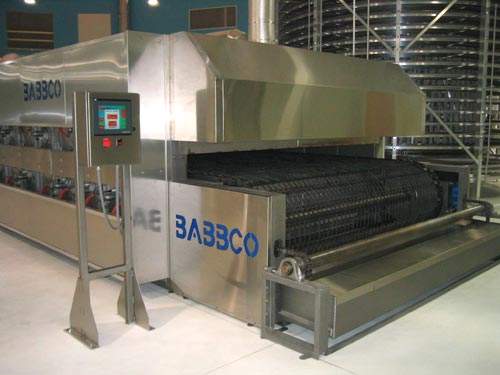 The CH Babb oven's PLC control system allows operators to change between recipes at the touch of a button. 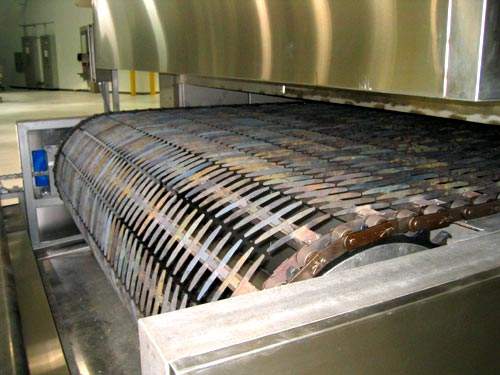 The oven's open grid conveyor allows air to circulate at high temperatures within the baking chamber.

Natural Ovens, a US-based producer of preservative-free wholegrain foods, moved into an innovative dome production facility at the beginning of 2003. The unique structure was designed by Monolithic Dome of Italy, Texas, and constructed by Dome Technologies of Idaho Falls. Joseph B Martin Architects of Lake Station, Indiana, worked with Dome Technologies on the internal design of the structure.

Natural Ovens was founded in Manitowoc, Wisconsin, in 1976 by biochemist Paul Stitt along with his wife Barbara, with the aim of supplying healthy, nutritious and preservative-free food to the Midwestern regions of the US.

The company aims for a fast turnaround, using freshly milled cereals and delivering finished produce to over 1,200 stores within 23 hours of baking (all of the products will still be of optimum freshness). When the company decided to expand in mid-2001, it chose Valparaiso as the location for its new production facility for its easy highway access to the key metropolitan areas of Chicago, Detroit and St Louis. Products are now available right across the US in over 30 states.

The bakery employs 58 personnel in three departments, namely production, packaging and sanitation and is achieving the production target of 30,000 loaf units produced per day, which was set when the facility first opened in 2003. The product range now includes not only 17 varieties of bread – including a low carbohydrate version – but also 11 types of bagel, seven varieties of cookie and numerous varieties of buns as well as granola bars, muffins, bread sticks and baking mixes with other products in development.

The Valparaiso facility is the company’s second facility, sited 265 miles from its first facility to allow easier nationwide distribution, as the company promises a 23-hour or less ‘window’ between baking the products and their delivery to the shelves of the grocery stores.

The CH Babb tunnel oven installed at Natural Ovens Bakery utilises direct-fired ribbon burners on the top and bottom along with a high velocity turbulator system for baking. This style oven has been proven to be very versatile and is capable of producing a large range of products including cakes, cookies, rolls, pan loaves, bread and bagels. The oven was built in pre-assembled modular sections which greatly reduced the on site installation time and cost. The modular design also allows the oven to be expandable for increased future capacity; Natural Ovens can add additional oven section to increase oven capacity with minimal downtime.

The tunnel oven is 110ft long by 12ft wide and utilises an open grid style conveyor system and a PLC control system. The tunnel oven is equipped with high velocity turbulator fans that provide controlled air circulation within the oven baking chamber. The CH Babb turbulator system provides a faster bake time, even colouring, moisture retention and greater sidewall strength. The turbulator fans are variable speed and high temperature construction. The oven is capable of baking 3,000 loaves per hour and thus over the single shift from 3:00am to 10:30pm can easily outstrip the daily production target of 30,000 units.

The PLC control system allows the operators to select from a range of master recipes with a single touch screen input. The PLC control system automatically adjusts all the relevant variables within the oven, including individual control of all burners and the variable speed turbulator fans. This allows for a quick change over between products.

On leaving the oven, produce passes to an IJ White spiral cooling system. IJ White manufactured, pre-assembled and inspected the spiral system in its factory prior to shipment, which allowed for fast and easy installation at the Valparaiso site. The system allows products to remain in process while cooling and offers even cooling and consistent quality.

IJ White’s central cleaning options save time and money at Valparaiso by automating time-consuming procedures. All components within the system are accessible and easy to clean. A belt washing station allows the product-carrying surface to be cleaned in-line, lowering maintenance costs and improving system operation.

“Natural Ovens has now closed down the Valparaiso bakery in Indiana and has appointed a new senior management team to determine the company’s future.”

Dome Technologies started construction at the Valparaiso site in July 2001. The initial stage of construction involved embedding continuous reinforcing bars into a ring beam foundation. These rebar dowels securely connect the dome to its footing.

An airform dome was then anchored to this base. The airforms are constructed by Monolithic Constructors in Texas, using a 200ft laser guide radio frequency welder to join segments of weatherproof material into the dome shape. With the airform in place, Dome Technologies used dual inflator fans, each powered by an independent power source, to inflate it. An airlock was added to allow entrance to the inflated airform.

With its thermal mass, the building is very energy efficient. It holds a very constant temperature of 70°F. There is no air conditioning, except for a few offices, and no heating in the dome. One large exhaust fan at the top of the dome allows the exhaust and exchange of the air inside the bakery. It is possible that a heating / cooling system may be needed eventually.

The internal architecture was completed in the third quarter of 2002, when Natural Ovens began installing bakery equipment. In January 2003 administrative staffed moved into the complex, with production staff moving in shortly after. Initial production was 9,000 units per day but this was soon approaching the 30,000 target.

Natural Ovens Bakery was accused in mid-2006 of misleading labelling on some its products and the US Department of Justice filed a law suit against them. The company agreed to fix misleading labels on its breads, muffins and bagels and to set up a monitoring system to make sure the misleading claims are not repeated. Two problems were identified, one regarding the ingredient calculations and the other related to health benefit claims.

Some of the company’s foods were classified under Federal law as drugs by the FDA because of the health claims on the labels (the company has previously promoted a bread with claims that it could treat arthritis). The FDA believed that the health claims could not be substantiated. In addition, the FDA inspected the company’s two facilities and tests showed that Golden Crunch Carb Conscious Bread, Golden Crunch Bagels, Carrot Nut Muffins, Gourmet Dinner Rolls and Paul’s Oats had incorrect levels listed for certain ingredients. By September 2006 all of the labelling problems had been corrected.

Natural Ovens closed the Valparaiso bakery in Indiana in 2007 and appointed a new senior management team to determine the company’s future. The bakery’s owners, Paul and Barbara Stitt, stopped overseeing day-to-day operations of the bakery. However, they did retain their ownership of the bakery. Paul Stitt, the founder, commented: “Like all bakeries, we have struggled with consumer trends that have negatively impacted sales… While our products are unsurpassed in quality, nutrition and taste, those advantages have not been enough to avert some difficult business decisions.”

Although one bakery is closed the company’s products are still available and are produced at the Manitowoc facility. Although Barbara and Paul Stitt have now removed themselves from the bakery’s operations, they said it is not their intention to sell the company. “We are unequivocally opposed to the compromise that would require,” they said. “We will not waiver in our commitment to what we stand for or what we have built here.”

With Natural Ovens an ongoing concern in its original premises at Manitowoc it does not seem likely that the innovative dome bakery will be used again. During the period from its closure in 2007 until February 2008 the equipment was removed and the dome lay empty. In February 2008 it became the WayPoint Church, which is a breakaway branch of the established Daybreak Community Church.

With this use for the building established for some months in lieu of a permanent industrial tenant the building was kept in a state of good repair.
In August 2008 Livemercial, a technology company, won a sealed-bid auction for the Monolithic Dome located next to Indiana 49 and Route 2 in Valparaiso. Livemercial now plans to use the dome as an information technology hub and put Valparaiso into the ascendency as an information technology center.