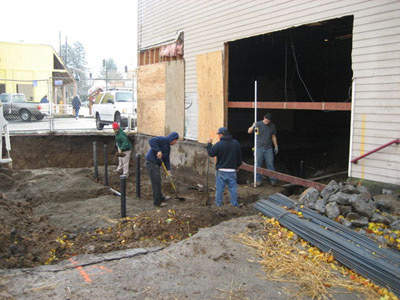 The Laurelwood brewery building had to be modified to accommodate the new brewery. 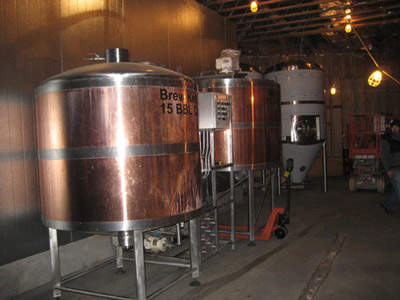 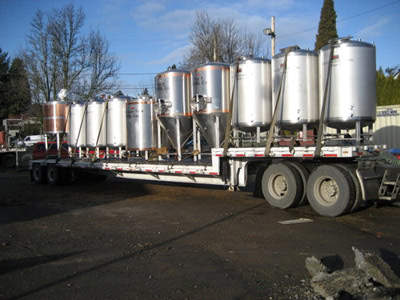 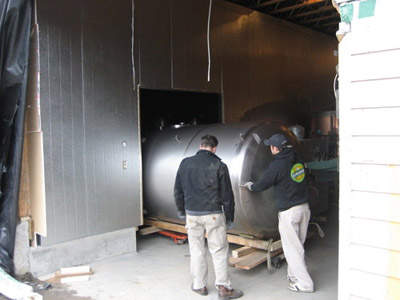 Serving tanks being installed into the refrigerated cooler at the Laurelwood brewery. 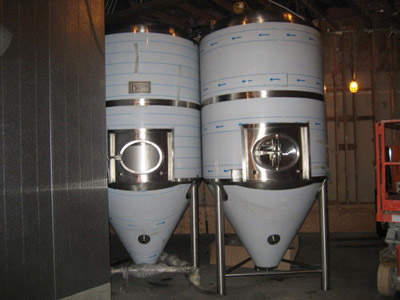 The Laurelwood Brewery in Portland, Oregon, is a mid-sized brewery in the middle of a major expansion. It is Oregon’s first certified organic beer producer. The brewery has moved from its premises in 40th Street to a new larger location in an old theatre in 51st Street that has been rezoned to allow its new use. The new premises allows the doubling of the current capacity.

The new building has had to have an extension of 1,000ft² added to it so that it can accommodate the office, grain storage, keg washing, mill room and the boiler. The facility will have two grain silos each of 40,000lbs, one for organic malt and one for conventional malt. The facility will also include a brew pub serving a range of ales and food to customers. The new facility required an estimated investment of $2.65m.

The brew house and main brewery floor has an epoxy coated floor to resist chemicals, hot water and to be resistant to heavy traffic. The floor was provided by Cascade Floors. The plant also has a large capacity refrigerated cooler for beer storage which was supplied by Imperial Manufacturing and installed by Arctic Refrigeration.

“The Laurelwood Brewery in Portland, Oregon, is a mid-sized brewery in the middle of a major expansion.”

A significant part of the equipment for the brewery was obtained from the sale of the Trask Brewing Company in McMinnville in December 2005 and Metro Rigging was the contractor responsible for the transportation and movement.

Two fermenters were supplied from a company in Europe, each holding 60 kegs of beer. These will mostly be used for the company’s two main products, Free Range Red and Boss IPA.

Three new serving tanks, each weighing 1,000 pounds and able to hold 60 kegs of beer, were fabricated by Interior Stainless of Canada.

DME Brewing services is also involved in the construction and fit out of the brewery. The three serving tanks will fit inside the cooler for beer storage at the correct temperature prior to bottling or kegging.

The brewery produces a range of quality ales both in kegs and also in bottles. European swing top style bottles are used for Organic Deranger, which won a gold medal at the 2006 Great American Beer Festival in Denver.

The Laurelwood brewery produces a variety of beers from Stout to Porters, and ales to lagers; all of these require slightly different processing and storage conditions but the brewing process is basically the same. Brewing is covered by four processes, these are mashing, boiling, fermenting and conditioning.

During mashing, crushed malt and hot water are mixed into a mash and then allowed to rest at between 148–158°F for a period of one hour. This is where the malt starch is converted into fermentable sugars.

The resulting sweet water (containing all the sugars), or wort, is washed from the husks of the grain on its way to the kettle. The wort is transferred to the kettle and boiled (pasteurised) for one and a half hours to kill unwanted microorganisms. Hops are added during the boil to add a bitter flavour to the beer as well as a characteristic aroma.

“The Laurelwood brewery produces a variety of beers from Stout to Porters, and ales to lagers.”

The hop flavour helps to balance the sweet ‘malty’ flavours in the wort. After the boil, the hopped wort is separated from the hops and chilled to 65°F for fermentation. Yeast is added to the wort in the fermenter.

Over the next week (ales) to two weeks (lagers), the yeast converts the fermentable sugars to alcohol and carbon dioxide.

Following fermentation, the beer is chilled to 35°F and then transferred to the cellar for conditioning.

Conditioning beer is necessary to remove yeasty flavours and to allow the beer to attain its best flavour and strength. This process is termed lagering (storing) and may be carried out for a period of 1–3 weeks before the beer is carbonated and transferred to kegs or bottled for distribution to pubs and retail outlets.