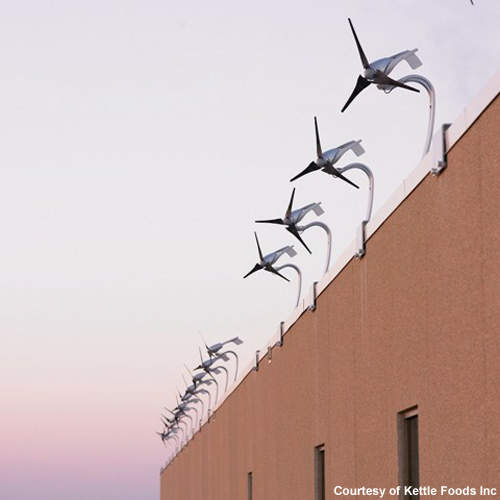 The building has 18 wind turbines to help offset its electricity use. 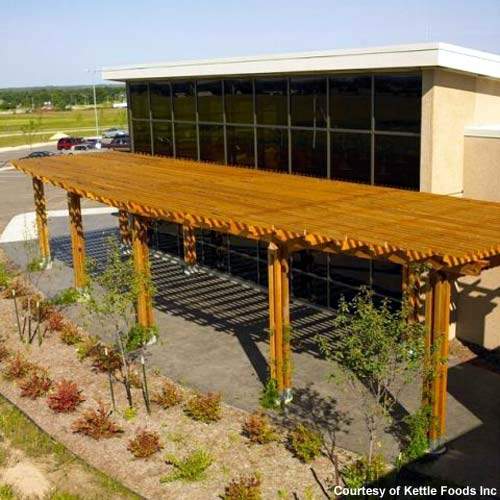 The exterior of the facility. 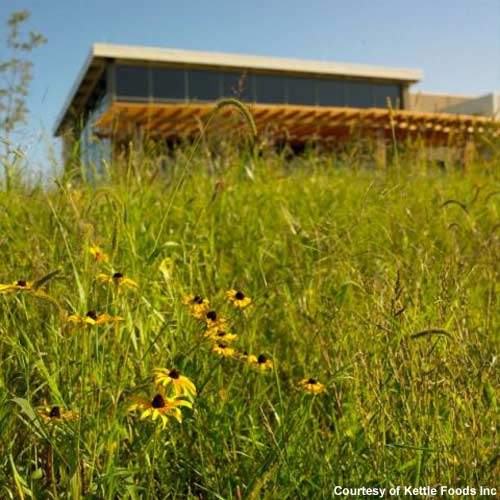 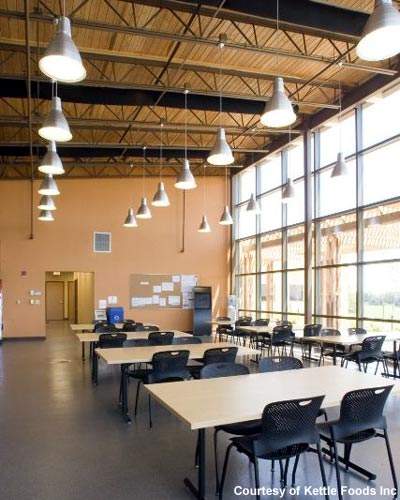 The construction used sustainable materials as much as possible.

In January 2006 Kettle Foods Inc announced the construction of a production plant in Beloit, Wisconsin, US. Kettle Foods, which was acquired in August 2006 by Lion Capital, has its headquarters in Salem, Oregon, and a plant in Norwich, UK. The company has a 31% market share in the natural potato chip market and produces more than 20 flavours and four varieties of potato chips, eight flavours of organic tortilla chips and a variety of nut butters and trail mixes.

“The plant processes around 50 million pounds of Russet potatoes a year.”

Beloit was chosen for the plant’s location due to the city’s position in the middle of the largest growing regions for the Russet Burbank potato. Also, the economic incentives from the state included a $500,000 development loan from Wisconsin Department of Commerce for creating 95 jobs and $510,000 from the City of Beloit. An estimated investment of $11m was put into building the 73,500ft² facility (estimates in 2007 indicated that there would be an economic benefit to the state of Wisconsin of around $18m). The plant processes around 50 million pounds of Russet potatoes a year and overall company production has been boosted by 50%.

Kettle Foods has a focus on environmental sustainability for all its facilities and the company wanted to make the greenfield Beloit plant as environmentally friendly as possible. It also sought to achieve LEED gold status (Leadership in Energy and Environmental Design from the US Green Building Council) during the build.

The plant was started up in September 2007 and its environmental and energy claims include:

For Tim Fallon, president of Kettle Foods North America, investement in green building was a conscious decision on the part of the company to demonstrate its values in a very tangible way. “Our employees have always encouraged us to look at ways to minimise our impact on the environment – from rooftop solar power panels to biodiesel fuel from our used cooking oil. Sustainable initiatives are business as usual at Kettle Foods,” he said at the plant’s opening

“The company has a 31% market share in the natural potato chip market.”

In September 2008, one year after the plant opened, Kettle Foods had made annual energy savings of 20%, with an estimated cost reduction of $110,000 on natural gas and $51,000 on electricity. In addition, reclamation systems allowed capture and reuse of 3.4 million gal of water, giving the factory annual water savings of $34,000. The facility also recycles 2,300 gal of waste oil every month, which is converted to biodiesel and used to fuel a fleet of ‘BioBeetles’ diesel VW Beetle cars.

The 73,000ft² building was designed by Flad & Associates of Wisconsin, an architect with experience in LEED projects. The site in Beloit was chosen by Kettle Foods in conjunction with A Epstein and Sons International of Chicago, Illinois. The general contractor for the project was Affiliated Construction Services (ACS), the engineer of record was Affiliated Engineers Inc and the civil engineers were Batterman & Co RH.

The plant’s 18 wind turbines were supplied by AeroVironment. The building used 38,000ft² of Spancrete precast concrete panels around a minimal steel frame to build the walls of the facility and the cut outs for doors and windows were recycled into aggregate.