The Hormel plant is one of the most environmentally sound food production facilities in the US. 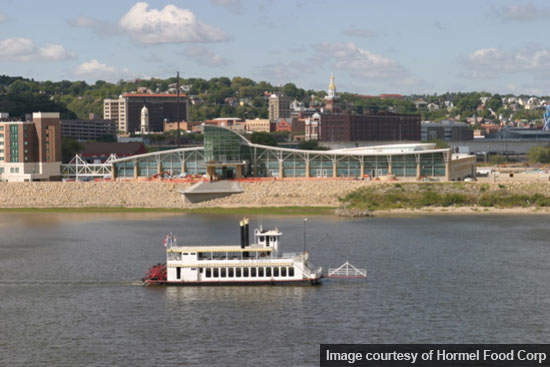 The plant is on the west side of Dubuque, Iowa.

Hormel is one of the leading food production companies in the US, responsible for brands such as SPAM, Carapelli, Dinty Moore, Farmer John, Jennie-O, and Stagg as well as its own Hormel brand name. One of Hormel’s most successful products is the Compleats range of shelf-stable microwaveable meals, the demand for which has outstripped production. To meet this demand, Hormel invested $89m in the construction of a 348,000ft² production plant in Dubuque, Iowa, US. It is located on a 39.5-acre site in Dubuque’s Industrial Center West.

The plant broke ground in July 2008 and produced its first microwave meals in January 2010. The grand opening, however, took place in March 2010. The facility is operated as Progressive Processing, a wholly-owned subsidiary of Hormel Foods. It is the first food processing plant built by Hormel in 25 years.

“The plant broke ground in July 2008 and produced its first microwave meals in January 2010.”

The state-of-the-art facility is expected to be the only refrigerated food processing facility to possess Leadership in Energy and Environmental Design (LEED) certification at any level.

The plant is built in accordance with the Green Building Rating System. The plant achieved LEED Gold status in July 2010.

The plant is the third food new-build project to go through this process in the US, the others being a PepsiCo Gatorade plant in Virginia and a Kettle Foods potato chip plant in Wisconsin.

The plant has an efficient retorting process which saves its grey water for flushing toilets and irrigation. The ‘waste’ heat from the cooling cycle of retorting equipment, HVAC, boilers, air and ammonia compressors (refrigeration) is saved using ‘geothermal’-type technology to heat office heating systems.

The campus uses a white membrane reflective roofing and permeable concrete to reduce erosion from water runoff. There are also 200 skylights to allow natural daylight over electrical lighting and dimmer controls for lights.

Monitoring systems with sensors control the temperature of the rooms, while the non-refrigerated areas use multilevel and sky lighting to reduce energy consumption.

Plant utilities are divided into a number of zones and controlled locally for greater efficiency. Employees who carpool are given preferred parking, while cyclists have locker and shower facilities.

Products manufactured at the facility include varieties of spaghetti, chicken and dumplings, chicken and noodles, and lasagna, though it can produce all varieties of Compleats and CHI-CHI’S Fiesta Plates microwave meals.

The plant uses state-of-the-art sorting equipment to ensure that no foreign particles enter the food. High-power magnets are used to remove iron or metal items. Products are x-rayed in order to detect foreign materials.