Barley processing to produce malt for the production of 1 billion litres of beer per year, uses Ecosteep system to save water 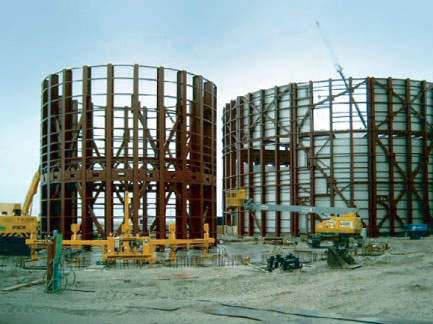 Holland Malt believes the plant is one of the largest and most modern barley storage and malting facilities in the world with the potential to produce over 130,000t of malt per year. 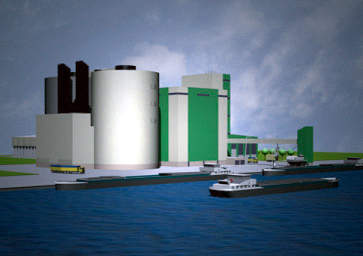 The plant began construction in March 2004 in the deep-sea Port of Eemshaven at a quay with loading facilities for malt and grain to be transported by ship. 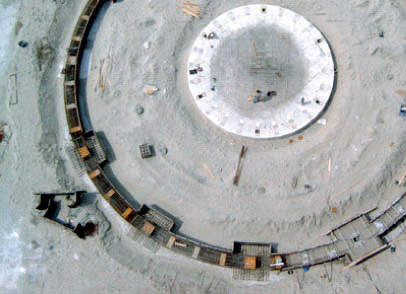 Foundation of the two malting towers &ndash; the batch size for malt production is 440t per 12-day production cycle. 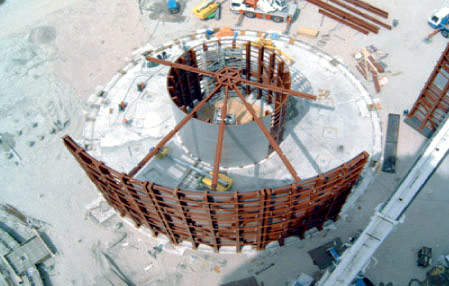 Construction of a malting tower &ndash; the plant can process up to 165,000t of malting barley each year. 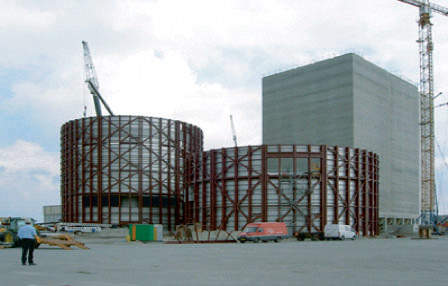 The new malt house is situated in the Dutch Nort Niederlands grain belt on the North Sea coast. 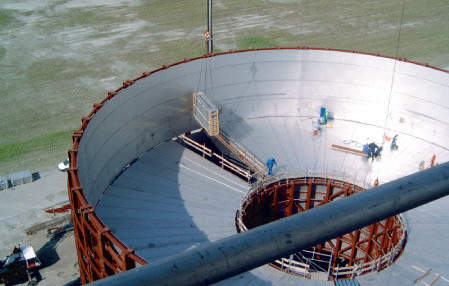 The germination section of the facility has six floors that can each take 440t (650kg/m&#178;); process time here is six days. 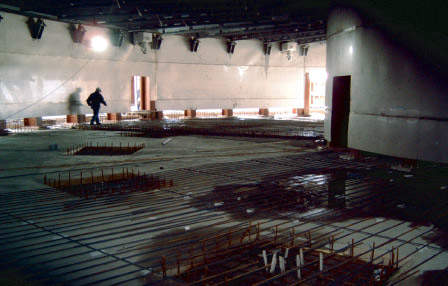 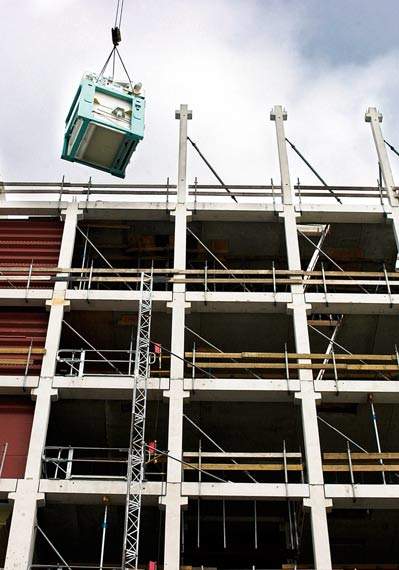 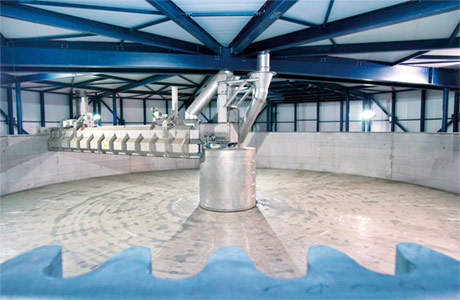 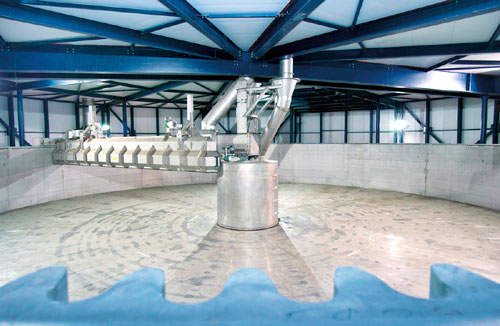 A new malting plant was opened in Holland in April 2005. A joint venture concern between the Dutch beer brewer Bavaria and the agricultural cooperative Agriﬁrm owns the state-of-the-art facility. This is one of the first times in Europe that a major grain cooperative – with over 600 growers – has joined forces with a major brewer to form a single expert malting company.

The new company is called Holland Malt and the new malt house is situated in the Dutch Nort Niederlands grain belt on the North Sea coast; this is for ease of logistical supply of raw materials.

The plant began construction in March 2004 in the deep-sea Port of Eemshaven at a quay with loading facilities for malt and grain to be transported by ship. The construction work was completed in January 2005 and the plant was commissioned and in full production by April 2005. The plant required an investment of some €55m; the finance for the construction was underwritten by Rabobank. The EU Commission was also asked to contribute grant aid for the facility.

“Each year the plant can produce enough malt to produce one billion litres of beer.”

Holland Malt believes the plant is one of the largest and most modern barley storage and malting facilities in the world with the potential to produce over 130,000t of malt per year by the processing of 165,000t of malting barley and other grains from the surrounding 30,000ha of arable land. Each year the plant can produce enough malt to produce one billion litres of beer.

The design of the malthouse is based on two towers; each contains an ‘Ecosteep’ unit at the top for a batch size of 440MT of barley per 12-day production cycle. Below it are three germinating units with the same batch size. The bottom-most section of the tower houses a single-floor kiln for half the production batch, which exchanges air with the kiln of the second tower. The decision to choose a rotary kiln was based on previous experience with stationary and rotary kiln decks.

Compared to the stationary kiln floor, the rotary type offers the advantage of producing very uniform germination. This is because the kiln deck rotates endlessly and therefore prevents differences in quality. Moreover, as a result of the fixed arrangement of the screw turner and of the loading and unloading unit, contamination underneath the kiln deck is much lower than with a stationary floor. This results in a maximum degree of sanitation even in this critical zone of the germination process.

The installation of the equipment and system components placed special demands on the structural strength and the design of the steel building. The plant building is modular and constructed entirely of steel for better hygiene. The facility has an annual production capacity of 137,000t, a malt storage capacity of 20,000t and a barley storage capacity of 60,000t.

The process consists of three basic processes: steep, germination and kiln drying. The steeping process occurs in the two specially designed Ecosteep flat-bottom steeps and the process time is four days. The germination section of the facility has six floors that can each take 440t (650kg/m²); process time here is six days. The kiln has two floors that can each accept 220t (325kg/m²); the drying process for the malted products takes 24 hours. Ecosteep works with only a low depth of material, so uniform malt qualities are achieved in production.

The malthouse has been designed to cut water consumption by up to 30% and has adopted a novel flat-bottomed steeping system developed by Buhler and various Dutch universities. The new system cuts water consumption of the plant compared to other malting facilities by over 30%.

The system has eliminated the clearance area below the kiln, which is a critical cleaning area requiring the use of lots of water. It also produces a more uniform malt quality by using only a low depth of malted grain material during the production cycle. The system makes use of gentle screw conveyors to spread and discharge the malting grain, while air and water for the process are controlled carefully by being fed through uniformly configured nozzles.

Holland Malt has installed a LogiSphere system from Sensite Solutions (a leading provider of wireless local tracing and telemetry solutions). The company intends to achieve continuous monitoring at its new Eemshaven plant to maintain quality standards and to identify cost savings in the process.

“The Sensite Solutions system allows the barley to be monitored and kept at the optimum temperature at all times.”

In this plant, continuous monitoring of barley stored at the facility is required for the quality of the final product to be assured. This requires temperature sensors to be placed in the barley itself and this makes a wireless solution much more convenient.

The wireless temperature monitoring tags are supplied in a format that can resist the tough environment of being covered with several metres of barley so that they can maintain 24 hours per day function. The system of associated receivers form their own wireless infrastructure and only three to four are required to cover the complete storage area. The system was very simple to install and to maintain (requiring little or no maintenance) and also has the reliability of wireless communication technology.

Holland Malt has also installed the Buhler PRIMUS high-capacity grain cleaner. The grain cleaner is equipped with a 30m² sand-sieve area, about ten times larger than the area currently offered by similar separators.

The larger sieve area will increase the capacity of the grain cleaner (to remove fine particulates) and the speed of the cleaning operation. The efficiency of the new cleaning system will also make the new facility the safest in Europe, as dust and fine particulates are major hazard in these types of plants being responsible for many serious explosions when dispersed in the air.

The plant is equipped with four Buhler PRIMUS high-capacity grain cleaners of types 200/8 and 100/8, which have been installed to remove coarse as well as ﬁne and low-density impurities from up to 600t of raw barley or 180t of malt per hour.

The PRIMUS system will also save production time due to a system of material diverters. These allow materials of different particle sizes to be alternately processed without requiring any sieve changes. This is made possible by the different perforations of the preliminary and main screens, which can be selected using two diverters. The resulting quadruple combination for so-called two-variety operation is an important feature when it comes to using a single machine to alternately clean wheat, rye, oats, barley, corn (maize), soybeans, rice or ﬁeld beans.

Efficient two-variety operation is possible at rates as low as 25t per hour depending on the degree of cleaning required. This is necessary as Holland Malt will clean the processed barley prior to steeping and also the malt before it is dispatched to the customer.

“In September 2006 the European Commission rejected the Dutch investment aid for the Holland Malt facility.”

In September 2006 the European Commission rejected the Dutch investment aid for the Holland Malt facility. The Commission decided under EC Treaty state aid rules to reject investment aid of €7,425,000 that the Dutch authorities had committed for the establishment of a production plant for malt in Eemshaven. The Netherlands had given this commitment at the end of 2003 under the condition that the aid would have to be approved by the Commission.

When assessing state aid for the processing and marketing of agricultural products, the Commission has to see whether sufficient market outlets exist.

The Commission found that in the period the plant was built and in which it became operational, supply of malt in the EU clearly exceeded demand. Malt prices were low and malting companies generally suffered from low profitability. In the last 12 months these bad market conditions had led to a number of permanent closures of malt plants.

The Commission did not find convincing evidence that, as stated by the Netherlands, the premium malt that Holland Malt produced does not compete with other malts. Differences in the quality of malt occur on the market, but they would not seem to severely limit the interchangeability between malts.