Stainless steel milk storage silos delivered to the site prior to installation.

Dalhart plant under construction, here a central corridor is being constructed in the cheese processing building.

Further construction on the new plant. 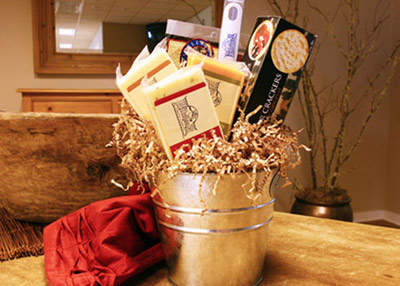 A selection of products from the Hilmar range of cheeses (only sold under the Hilmar name from their own retail outlet).

Friesian or Holstein cows who will produce the milk for the cheese plant. 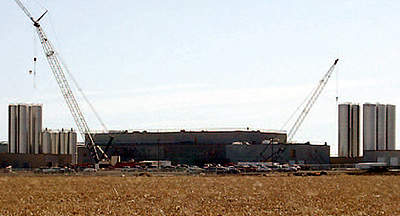 The plant nears completion and internally there are 400 workers on site. 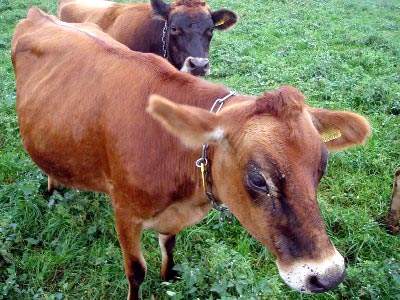 Jersey herds are being encouraged because of the milk’s higher fat and protein content.

In December 2005 the California-based Hilmar Cheese Company, along with its partner Steuben Foods, announced a new cheese plant and a facility expansion at the aseptic food and dairy plant in Dalhart, Texas. When the first phase production began in the third quarter of 2007, the $190m (invested over ten years) plant was capable of producing about half a million pounds of cheese a day from an initial milk supply of 250,000gal per day. The plant is projected to employ more than 350 workers by year nine of production but had initially employed 120 people.

The facility has been constructed primarily in two phases but will be expanded over a 12–15-year timescale. The plant has begun cheese production with milk from ten independent dairies totalling 36,000 milk cows. Over the initial nine years of production, this will increase to more than 150,000 milk cows and the plant will employ more than 1,500 workers in the dairies.

"There were over 100 job vacancies needing to be filled during the summer 2007 for the start of operations."

Processing capacity started at a level of two million pounds of milk per day, and is expanding each year with the maximum capacity of 9.5Mlb per day expected to be reached in 2014 – 5Mlb per day by 2009 marked the end of the first phase.

On 6 August 2008, the company announced the phase II expansion project of the plant. In February 2010, Hilmar announced an additional investment of $100m in the expansion. The second phase of expansion commenced in January 2010 and was completed in 2011.

The investment has brought the total cost of the expansion project to more than $200m. Phase II has doubled the plant’s processing capacity from 580,000 gallons to one million gallons of milk per day and expanded Hilmar’s line of whey products. Initially 40lb blocks of cheese were produced at the plant, while the expansion allows for the production of 640lb blocks.

Dalhart plant currently employs around 200 people and another 50 workers will be hired by end of 2011.

Texas as a state produces around 100Mlb of milk per day so the cheese plant is set to eventually accept around 10% of the state’s milk production.

Water for the plant is plentiful and drawn from the eight-state Ogallala Aquifer, which has high-quality water with minimal salt content. About 2.2 million gallons of wastewater per day is treated using a state-of-the-art treatment plant and can either be injected into a bore hole and into another aquifer or returned to the environment by using it for irrigation on adjacent land. Everything is used.

The State of Texas has provided tax incentives to Hilmar to build the new cheese plant at the Dalhart facility. The incentive package included:

An impact analysis of the cheese plant and the associated dairy development commissioned by the High Plains Dairy Council and prepared by the Perryman Group (TPG), shows that the total expenditure based on the construction impact of the project is nearly $280m initially and more than $1bn at build-out. The impact of the operations of the cheese plant and associated dairy operation is $144m and 1,100 new jobs initially and nearly $570m and 4,300 jobs at maturity.

Hilmar has no cheese brand of its own, except for that sold in its company shop. Retail sales account for half of the output, through both grocers’ private labels and large cheese marketers. Industrial cheese (as an ingredient) is 28% of the business, and food service accounts for the rest. The company also makes use of the whey by-product of its cheese making and exports 65 million pounds of whey protein concentrate and lactose each year.

Whey protein concentrate is used as an ingredient in many foods including nutritional beverages and bars; and lactose is used as ingredient in confectionery and sports nutrition products (used to be used for cattle feed). Proliant Inc of Iowa performs the research and development, application and marketing for all of Hilmar’s by-product ingredients. The new Dalhart facility produces a variety of cheeses including Cheddar, Monterey Jack, Pepper Jack, Colby, Colby Jack and Mozzarella in 40lb blocks for shipping to food service and wholesale customers who will slice and package the cheese for retail customers.

Construction of Hilmar Cheese’s new cheese and whey protein plant in Dalhart, Texas began in March 2006. The facility is situated on a 40-acre site one mile north of Dalhart and has a floor space of 200,000ft². The facility was constructed by Amarillo-based Western Builders. Bonelli and Associates was the architect and engineer for the facility.

Construction of the plant was completed in September 2007 and it became fully operational in October 2007.

There were over 100 job vacancies needing to be filled during the summer 2007 for the start of operations. In addition, new facilities were constructed at several dairy farms to accommodate the milk production of the initial 25,000 herd of dairy cows required for the plant to open.

Many dairy farmers have relocated to Dalhart to establish very lucrative supply contracts with their herds. Jersey herds have been put forward as the favoured ones because of their higher yield of fat and protein in the milk, which is essential for cheese production and actually makes better economic sense. Milk solids and fat content is crucial as this is the basis of how the farmer will get paid.

"Phase two has doubled the plant’s processing capacity from 580,000 gallons to 1 million gallons of milk per day."

Jersey-Holstein cross milk comes in the middle with a yield of about 11.0lb per hundredweight, so the herd will make the difference to the remuneration from the company.

By 2012 over half of the milk production in Texas will be from the panhandle area.

Dalhart was selected for the plant for a number of reasons, including its proximity to existing and new east coast and midwest customers, access to a growing and reliable local milk supply, good local infrastructure, including ground and rail transportation, positive local business climate including state support for economic development, and a stable regulatory environment.