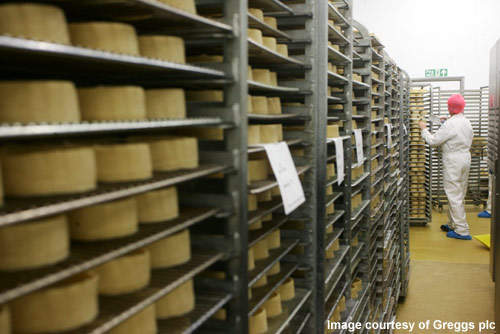 Storing pies ready for dispatch to the retail network. 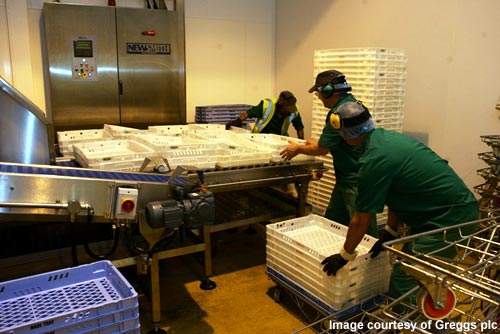 Polypropylene bakery trays can be a fire hazard, hence the state-of-the-art sprinkler system. 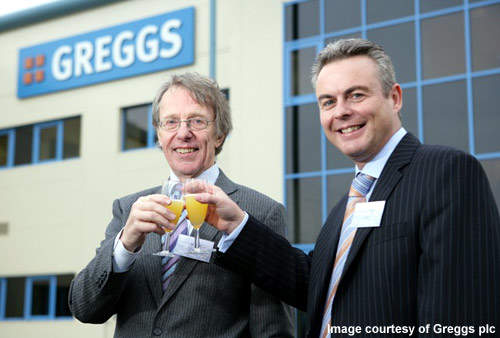 The bakery was opened by Ian Gregg OBE (right) and Alan Greenshields, general manager of Greggs of Scotland (left). 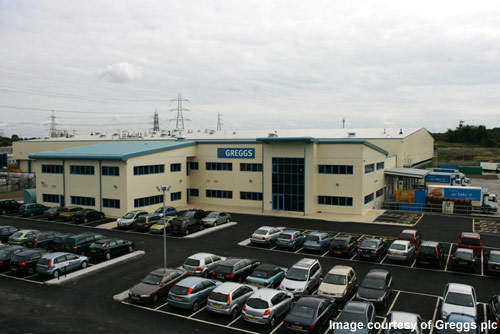 The new bakery is situated in Clydesmill Investment Park.

Greggs is the UK’s largest bakery retail company, with a chain of more than 1,400 Greggs and Bakers Oven retail outlets selling an extensive range of baked goods including pies, pasties, doughnuts, cakes, bread, rolls and scones. The company first started in Newcastle and has a large base in the North East and Scotland, with 149 Scottish stores.

In June 2006, as part of an expansion and update of facilities, Greggs decided to relocate the company’s main Scottish bakery from the Rutherglen bakery in Glasgow to a new purpose-built site 2.5 miles away on the Clydesmill Investment Park.

Plots 2, 4 and 5 of the Clydesmill Investment Park, Westburn Drive, Cambuslang were sold to Greggs for £730,000 in May 2005. South Lanarkshire Council granted planning permission for the new bakery in mid-2006.

The 340 staff of the Rutherglen bakery were transferred to the new facility. The expanded bakery also increased production efficiency.

The bakery required an investment of £15m and was officially opened on Tuesday 27 November 2007 by Ian Gregg.

The construction of the new Greggs production factory began in the second half of 2006. The general contractor for construction was Cleggs Food Projects. The lighting, power, fire alarm and emergency lighting systems were installed by SCS Building Services.

The system combines water and foam in a sprinkler unit. This is because burning polypropylene quickly melts and cannot be easily extinguished with just water; that is when the foam component is useful. Insurance on facilities of this kind can be high and this system will lower premiums.

The new equipment will allow the production of an extensive range of rolls, sweet bun goods, doughnuts and supply other divisions with pie lines.

In 2009, the company confirmed plans to extend its facility at Clydesmill. The expansion of the factory is planned to be completed by 2012. The details of the expansion are yet to be announced.

Greggs upgraded its retail shop systems with new EPOS hardware from J2 Retail Systems in June 2006. The upgrade has included the installation of 550 integrated touchscreen terminals to an initial 300 stores.

A 500-store installation contract was awarded on November 2007.