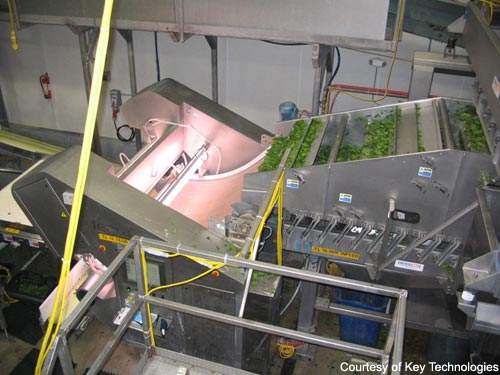 The FluoRaptor system process begins with separating the vegetable material. 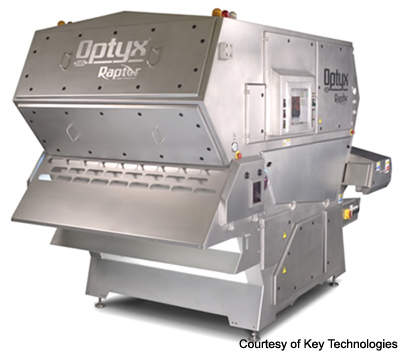 The Optyx Raptor system has visible/infrared cameras to detect even small defects in a product. 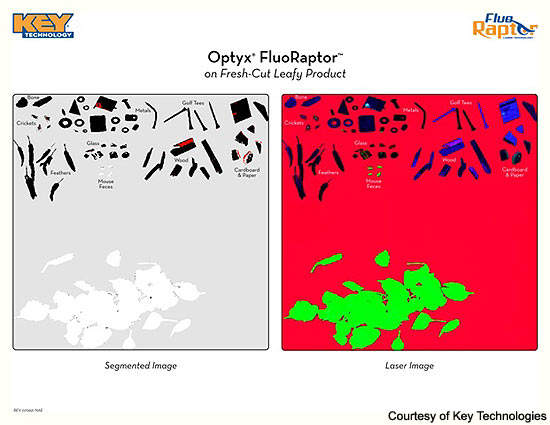 The screen on the FluoRaptor system displays information about what the laser scans and sees. 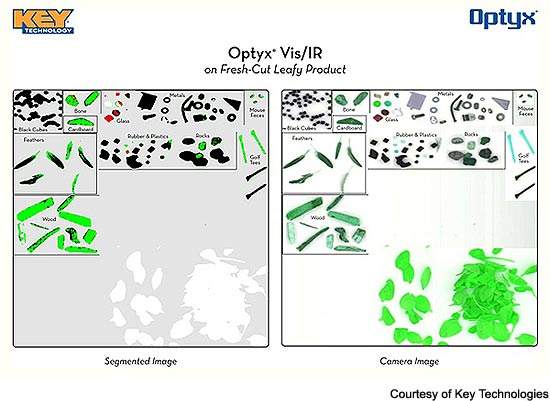 The Optyx Vis/IR camera allows detection of even small colour differences in vegetables, such as dark patches or bruises. 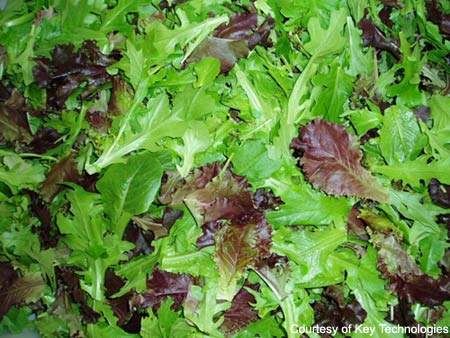 The FluoRaptor system can detect and remove foreign bodies such as cardboard, plastic, metal, glass and also insects from fresh leaf products.

One of the most important aspects of food processing and packaging is to maintain the quality of the product. Customers can be put off at the last moment at the point-of-sale and so it is paramount to present the product correctly and provide only the best.

One of the markets in which this is especially important is fruit and vegetables; no consumer wants to buy an apple or carrot with a dark patch or a defect, despite the fact that it might still be perfectly good.

One system which has made a significant contribution to helping suppliers sort vegetables and only pick the grade-one produce for the supermarket shelves is based on a fluorescence-sensing laser. The system uses a laser sensor to detect the defects in the vegetables (both fresh and frozen) so that they may be rejected.

The system, which is called FluoRaptor, is a fluorescence-sensing laser sorter. The system was designed to maximise the detection and removal of defects, foreign material and extraneous vegetable matter on vegetable sorting lines.

The system was developed by Key Technologies and works based on sensing differing levels of chlorophyll and also colour, size, and shape of the product being sorted. It uses one of the most powerful laser systems available which works in conjunction with a trichromatic Vis/IR (visible/infared) camera system.

This optical system uses a high-resolution laser scanner to detect even small defects; the signal-to-noise ratio has been improved to produce the most accurate product signature.

HOW DOES IT WORK?

With its Vis/IR cameras the Optyx FluoRaptor can analyse size and shape of the vegetables – or leaves in the case of salad – as well as millions of very slight colour differences. One example is in the sorting of peas: the system can distinguish between peas, the pod material which is the same colour, the vine and the leaf. It can even determine between fresh and frozen peas and also establish whether they have been blanched or not.

But the system is not just about vegetable material. For fresh leaf products such as salad leaves, spinach and spring greens, the system can detect and remove foreign bodies such as cardboard, plastic, metal, glass and also insects.

“The system can detect and remove foreign bodies such as cardboard, plastic, metal, glass and also insects.”

In the processing of cabbage, and iceberg and romaine lettuce, the system can also remove the core from the vegetable to aid in processing.

The system has a full colour display to show the operator a laser image of the vegetables on the belt, allowing time for the operator to adjust the accept/reject threshold for vegetables to be retained and those to be rejected. The computer system is easy to use for the operator as it has an icon based graphical user interface (GUI), which can be accessed on the machine or remotely via intra or internet.

The system parameters for the set-up can be stored on the system’s G6 computer or alternatively can be transferred from a USB key for rapid changeovers. The system is modular and can also be connected to a range of standards for image transfer, including Camera Link, FireWire and Ethernet.