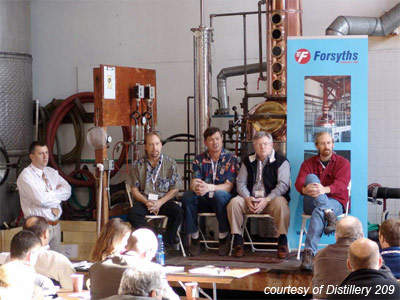 Distillery 209 is the first gin distillery to be set up in the US in 100 years. 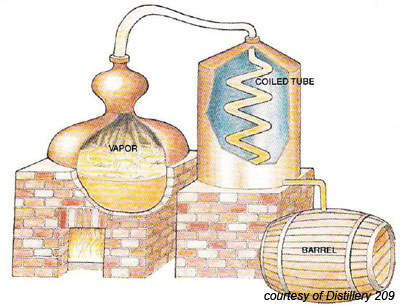 The distillery is based around a copper swan's neck pot still designed and constructed by the Forsyth Group in Scotland.

The premium 209 gin is distilled five times for extra purity and all ingredients are used once. 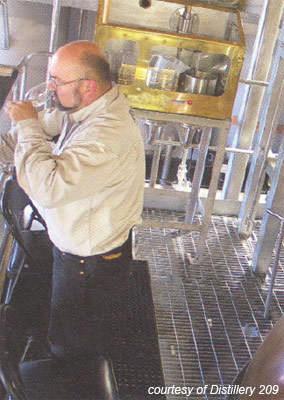 The head distiller is in charge of testing the 209 gin and ensuring its high quality. 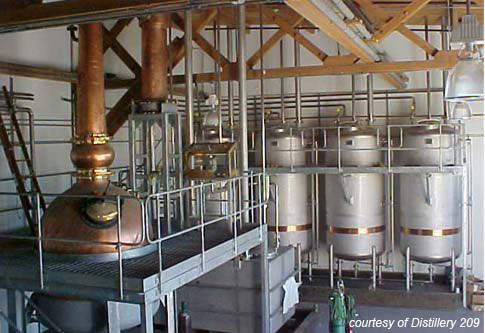 The still was hand built from hand-hammered copper and is nearly 25ft high, making the large size of the facility essential to the gin-making process.

Distillery 209 is a new custom-designed gin distillery, which has been set up on Pier 50 (shed B) in San Francisco's port area (China Basin). This is the first new gin distillery to be set up in the US in 100 years. The new distillery project is a combination of British gin distilling experience in the form of Colin Mcphail, a Scottish-born distiller, and Leslie Rudd, a Californian wine producer, owner of Dean and Delucca.

The distillery has been set up to exploit the new premium spirits market. The new 209 gin brand is sold at a premium price of $30, around $10 more than the imported gin brands such as Tanquary, Sapphire and Beefeaters.

The gin distillery was named No 209 after a historic (now defunct) distillery found on Rudds land in St Helena. The distillery is based on Pier 50 in the heart of the San Francisco Bay area because of the excellent logistics and the greater number of outlets for the proposed premium gin brand. This is the only gin distillery in the world built over water; the natural cooling effect of the water under the pier helps in the gin production.

Distillery 209 has signed a three year lease for a 4,675ft² area of the Pier 50 building (Shed B) south of Pac Bell Park. The rent is $2,571 per month for the property and over $250,000 worth of infrastructure improvements have been made to the building including new services and bringing the building into conformation with the required regulations.

The distillery is based around a copper swan's neck pot still designed and constructed by the Forsyth Group in Scotland. The Glenmorangie distillery had purchased this design from a defunct gin distillery many years previously and so the design was initially one to make the perfect gin.

The still was hand built from hand-hammered copper and is capable of producing 300 cases of gin in one run. The swan neck, which acts as an air condenser effectively connecting the still to the water condenser, is nearly 9ft off floor level. The still is nearly 25ft high.

Wright Process was the process engineering company responsible for the installation of the still and a complete distillation process system including automation controls, utility piping and a reverse osmosis system to produce pure water. The water is obtained from snow melt from the Sierra Nevada Mountains.

Gin consists of a neutral grain-based spirit flavoured with botanicals such as juniper berries, coriander seed, bergamot peel, lemon peel and star anise. Every gin brand has its own recipe and 209 is no exception; it uses the same basics as other brands but the final recipe is a secret.

The 209 process does involve the spirit being distilled five times, the last distillation stage being after the overnight soaking/flavouring process with various botanical ingredients. Arne Hillesland is the Head Distiller; he uses mid-west corn to produce the neutral spirit gin base, distilling four times for purity.

The final distillation is of a mixture of bergamot orange peel from Calabria in Southern Italy, orange, Chinese cassia bark, Guatemalan cardamom, coriander and juniper berries from Tuscany, plus the secret ingredients. All the ingredients are used only once for a 'single shot' distillation.

“The still was hand built from hand-hammered copper and is capable of producing 300 cases of gin in one run.”

The traditional pot still consists of a copper container, connected to a receptacle by a metal swan neck arrangement. The pot still, which can be of various different shapes according to tradition or the actual spirit being distilled, is fired by wood, coal or gas. The distiller has a much better control of the pot still temperature over and above other stills and can regulate the strength of the distillate to fit his objective.

Usually, pot still distillates contain 70% or lower ABV. The rest is composed of phenolics of the base ingredient; so therefore the final product – be it whisky, gin, cognac or brandy – carries a distinct taste. A low-alcohol wine will end up at 60% ABV distillate and similarly a fermented corn mash will taste of corn before ageing in barrels.

Pot still distillates contain small amounts of fusel oils which can be chemically ‘corrected’ by filtration through activated charcoal filters or removed by multiple distillations. Obviously the quality of the alcohol produced has to be rigorously checked for impurities by quality control using a gas chromatograph.